2 hostels available. Prices start from $37 for a :roomType.
We compare all hostel prices in Karlstad for you. So you save money and time!

This section is dedicated to take away all your "I wish someone had told me that before I went!" experiences. This way, you are better prepared for what to expect, what not to expect and can spend less time settling in, and more time making new friends in your chosen hostel. We share our insider knowledge of tips, tricks and important things to look out for in Karlstad. To help you make friends with Karlstad before you visit, we've included a few helpful and fun things you should know about the area. Enjoy! 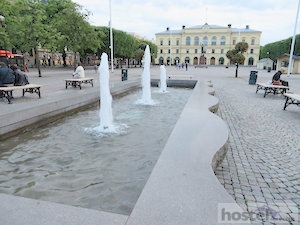 Spending time in the city of Karlstad, it's easy to almost instantly fall in love with the people, the unique culture, and the scenery. Swedes in Karlstad spend a lot of time outdoors, regardless of the weather conditions. Cross-country skiing through forest trails is a popular activity during the winter months, and biking, swimming, and sitting on cafe patios is common during the warmer months. Karlstad is known to be one of the sunniest cities in Sweden, and their emblem is a sun to reflect this. They have a great university in Karlstad, and good night life. The trains to Gothenburg and Stockholm are affordable and the trains are very new. The bus system in Karlstad is very user-friendly, and there are also Swebus (regional buses) that can get you to almost any city in Sweden, and to Oslo, Norway (three hours by bus).

Hostels in Karlstad are all centrally located -- they're close to the city square, supermarkets, and entertainment and on bus routes or within walking distance. Hostels in Karlstad tend to be very welcoming and appear clean and cozy. Staying in Karlstad hostels is a great idea if you're on a budget, as hotels in Sweden are generally quite expensive in comparison to hostels.

There are also great cafes and restaurants in Karlstad that will showcase both traditional Swedish cuisine and modern cuisine. Cafe's in Karlstad offer indoor and outdoor seating during the appropriate months, so you can enjoy a coffee and a cinnamon bun while taking in the sights of the city or people watching.

Living in Karlstad is much more affordable than Stockholm or Gothenburg, and it still feels connected to the rest of Sweden. Karlstad is situated on Lake Vanern, which offers many activities during the warmer months. The city square offers free bike rentals during the summer, and the bus system also expands to accommodate water taxis on the river channels that move through Karlstad. This city has a lot to see -- you should definitely visit to experience Swedish culture and the outdoors!

There are plenty of frequently asked questions about hostels in Karlstad. We've collected the most common questions and doubts when it comes to picking your preferred accommodation in Karlstad. The more you know, the better you can plan with confidence and ease, right?

This makes this very website the best place to find cheap accommodation in Karlstad.

Above we list every single hostel there is in the city. Let us take a broader look at what you can expect - and what not. We created this cheatsheet for you to get a more complete picture of the hostel quality in Karlstad, average prices and types of hostels to choose from.
2 Total number of hostels
$37 Average dorm price
$37 Cheapest hostel in Karlstad
Karlstad Vandrarhem is the cheapest
3.7 Average rating of all hostels

Travel Tips for Karlstad - from the Community

Travel Tips for Karlstad - from the Community

Oh man, so far no one from the community has left a comment or travel tips for Karlstad. How about you kick start the discussion here? Gather your best backpacking recommendations for Karlstad and jot them down below. The community thanks you.