1 Hostel in Mbabane available. Prices start from $9 for a dorm bed.
We compare all hostel prices in Mbabane for you. So you save money and time!

This section is dedicated to take away all your "I wish someone had told me that before I went!" experiences. This way, you can spend less time settling in, and more time making new friends in your chosen hostel. We share our insider knowledge of tips, tricks and important things to look out for in Mbabane. 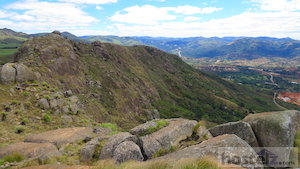 Mbabane, Swaziland, is the capital of Swaziland and is tucked into the western part of the kingdom, just thirty kilometers east of the Oshoek border post with South Africa. It has a population of close to one hundred thousand and is the administrative center of Swaziland. The hustle and bustle of this city is a world away from the rest of rural Swaziland. It became the kingdom's capital in the early twentieth century, superseding Manzini, then called Bremersdorp, during the British administration. It is twinned with Taipei and Fort Worth, Texas, among others. While not a tourist destination in itself, it is a necessary transit point and is very well served by public transport, as you would expect a capital city to be.

Of the attractions in and around Mbabane, Mantenga Nature Reserve and Cultural Village are just thirty kilometers south of the city. The cultural village is built in the style of a traditional Swazi village from the mid-nineteenth century and has its own Swazi dancing troupe that performs twice a day. The nature reserve has extensive hiking trails through hilly countryside, offering caves and waterfalls as well as great birding.

Sibebe Rock, the second-largest freestanding rock in the world after Uluru in Australia, is just eleven kilometers northeast of Mbabane and is great for a few hours walking, with several trails to the top. Tours are run by Swaziland's Community Tourism Program and there is a small entrance fee.

There are plenty of frequently asked questions about hostels in Mbabane. We've collected the most common questions and doubts when it comes to picking your preferred accommodation in Mbabane. The more you know, the better you can plan with confidence and ease, right?

This makes this very website the best place to find cheap accommodation in Mbabane.

Above we list every single hostel there is in the city. Let us take a broader look at what you can expect - and what not. We created this cheatsheet for you to get a more complete picture of the hostel quality in Mbabane, average prices and types of hostels to choose from.
1 Total number of hostels
9.1 Average rating of all hostels

Travel Tips for Mbabane - from the Community

Travel Tips for Mbabane - from the Community

Hey fam! Here are a few more tips from the community, from them to you, and you to them. This space is dedicated for travellers to share their best tips on backpacking Mbabane. Have a closer look - the Hostelz community share real hidden gems, insider knowledge and overall impressions of Mbabane. Everyone is welcome to add something useful, funny, unexpected and the "absolutely necessary to know before you go" - share, share and then share a little more!