14 hostels available. Prices start from $17 for a dorm bed.
We compare all hostel prices in Valencia for you. So you save money and time!

This section is dedicated to take away all your "I wish someone had told me that before I went!" experiences. This way, you can spend less time settling in, and more time making new friends in your chosen hostel. We share our insider knowledge of tips, tricks and important things to look out for in Valencia. 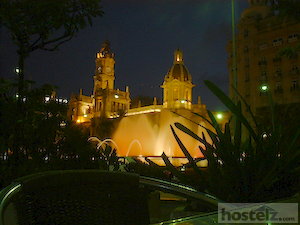 Valencia is an amazing city! There are beaches, mountains, and historic sites (all of which are gorgeous)! There is always plenty to do around this great city and the weather always tends to be mild! There are loads of restaurants, shops, shopping malls, and food stands (don't miss out on churros!). Spain has a lot of delicacies that you can find in Valencia (paella, balls of pork in blood, and calamari).

Valencia hostels can be found all throughout the city -- there is at least one about a ten-minute walk from the train station. However, don't confuse "hostel" ("albergue" in Spanish) with the Spanish word "hostal" (a hostal is a family run cheap hotel with dorms, where you won't find the same social environment as a hostel ("albergue").

The city can be reached by pretty much any kind of transportation (airplane, train, bus, car, and bus-ferry-bus). Generally the city is easier to get around by foot if you are staying in the historic center, while the beach is easily reached by metro. The transportation is fairly good in Valencia and not too pricey (although the metro does not go through the city center). If you are driving a vehicle and go to the beach, beware -- some of the beaches have parking spots monitored by children you pay to "protect" your car (we were with locals when this occurred, so it was not foreigners getting duped). The city is really safe (so long as you are not completely clueless about walking around a large city).

The people are very friendly in Valencia, but don't wear other football teams' jerseys here, as the Spanish are very passionate about their soccer/football teams -- a shouting match may ensue, but nothing more. They speak Catalan (a Spanish-French mix), however, they all know Castilian Spanish (the Spanish that is taught in schools).

The best time to visit Valencia is during Las Fallas (they display painted paper mache sculptures throughout the city center, and eventually burn all of them; although not as well known internationally as other festivals in Spain, it is the largest festival in Spain). Las Fallas occurs the week before Semana Santa (Easter week) in March. During the festival they have the gorgeous sculptures they've worked on for an entire year, astonishing fireworks, street food, parades, pageants. It is also a week of repentance (you will see people dressed in garb similar to the KKK, but they are NOT part of the KKK/anything like it, it is a costume they have used for much longer than the KKK; it is simply to hide the identity of the repenter as the repentance is between the repenter and God). While Las Fallas is an amazing festival, Semana Santa is a tad scary (they run a fake Jesus on an open sedan chair through the streets of the city center while people throw things at him and shout).

We've collected the most common questions for hostels in Valencia. The more you know, the better you can plan with confidence and ease, right?

This makes Hostelz.com the best place to find cheap accommodation in Valencia.

What are the best party hostels in Valencia?
The River Hostel is the best hostel for partying in Valencia.

Above we list every single hostel there is in the city. Let us take a broader look at what you can expect - and what not. We created this cheatsheet for you to get a more complete picture of the hostel quality in Valencia, average prices and types of hostels to choose from.
14 Total number of hostels
$27 Average dorm price
$86 Average private room price
$19 Cheapest hostel in Valencia
Capsule Hostel is the cheapest
9 Party hostels in Valencia
The River Hostel is the best rated
7.9 Average rating of all hostels

Travel Tips for Valencia - from the Community

Travel Tips for Valencia - from the Community

Hey fam! Here are a few more tips from the community, from them to you, and you to them. This space is dedicated for travellers to share their best tips on backpacking Valencia. Have a closer look - the Hostelz community share real hidden gems, insider knowledge and overall impressions of Valencia. Everyone is welcome to add something useful, funny, unexpected and the "absolutely necessary to know before you go" - share, share and then share a little more!