All Hostels in Santiago de Compostela

Search all hostels for availability

Above we list every single hostel there is in the city. Let us take a broader look at what you can expect - and what not. We created this cheatsheet for you to get a more complete picture of the hostel quality in Santiago de Compostela, average prices and types of hostels to choose from.

(Albergue Roots & Boots is the cheapest)

(A Casa de Dora is the best rated)

Hostels in Santiago de Compostela for all Traveller Types

from $23
Best for Solo Traveller

Travelling on your own to Santiago de Compostela? Fabulous!

Pick a great hostel designed with solo travellers in mind, and you're bound to meet plenty of like-minded people who have also dared to venture to Santiago de Compostela alone. Here are the top hostels for solo travellers in Santiago de Compostela. We've also highlighted which hostel offers special perks you, as a solo traveller, will love. Each hostel offers great social spaces to meet fellow backpackers and wonderful opportunities for making new friends. You'll soon realise that travelling on your own definitely does not mean travelling alone.

This section is dedicated to take away all your "I wish someone had told me that before I went!" experiences. This way, you are better prepared for what to expect, what not to expect and can spend less time settling in, and more time making new friends in your chosen hostel. We share our insider knowledge of tips, tricks and important things to look out for in Santiago de Compostela. To help you make friends with Santiago de Compostela before you visit, we've included a few helpful and fun things you should know about the area. Enjoy! 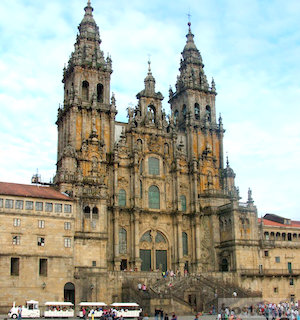 Santiago de Compostela is the capital of the autonomous Spanish community of Galicia. It is a pilgrimage destination, attracting tourists from all over the world to its grandiose cathedral all year round, and particularly during spring.

Apart from the religious appeal of Santiago de Compostela, this city is where most of Galician universities concentrate, making it a place filled with youth and everything that comes with it -- cultural activities, a lot of places to dine out inexpensively, nightlife for all tastes (from traditional pubs playing Galician music to clubs blasting the latest dance songs), live music, and shopping.

Hostels in Santiago de Compostela can be found mainly in the historic center (casco viejo), ten minutes' walking from the areas surrounding the cathedral and Praza do Obradoiro (main city square). Being this a small city, everything is close by and you can walk anywhere, from the historic center to the more modern areas around "Campus Sur." Buses are available, but unless you need to go from one end of the city to the other or it's raining hard (which is not that unusual in what they call the rain capital of Galicia), it is sometimes faster to walk, and certainly entertaining, as every street of Santiago is filled with culture, interesting buildings and people walking by.

Most hostels in Santiago, especially in the historic center, have been built in old, charming buildings, but are comfortable on the inside as they tend to be renovated to cater to modern life needs. Usual levels of cleanliness are good, and there should be central heating as it does get very cold, and plenty of hot water.

Santiago de Compostela is a charming city that offers a contrast between its historical and ancient sights and the young college population that fills the city with life from September to June.

How to find hostels in Santiago de Compostela?

Hostelz.com shows all 12 Hostels in Santiago de Compostela. Simply filter by neighborhood and price to find your perfect budget place to stay.

What is the best way to find cheap accommodation in Santiago de Compostela?

A Casa de Dora is the best rated hostel for partying in Santiago de Compostela.
It offers: Bar.

Travel Tips for Santiago de Compostela - from the Community

Hostel? Check! Now let's have at your hostel packing list for Santiago de Compostela and Spain.