8 hostels available. Prices start from $21 for a dorm bed.
We compare all hostel prices in León for you. So you save money and time!

This section is dedicated to take away all your "I wish someone had told me that before I went!" experiences. This way, you can spend less time settling in, and more time making new friends in your chosen hostel. We share our insider knowledge of tips, tricks and important things to look out for in León. 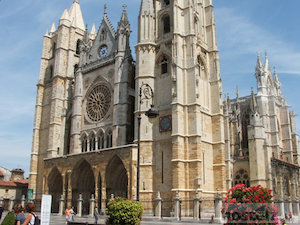 León was built as a Roman military camp a few decades before Christ. Since the tenth century, the Kingdom of León played a major historical role as an active champion in the Reconquista against the Muslims, becoming one of the key kingdoms in Spain. The city hosted the first Parliament in the history of Europe in the twelfth century. During the Middle Ages, the city lost its importance, mainly because it was no longer an independent kingdom.

León is a welcoming city for national and international tourism, thanks to its historical and monumental heritage; the various celebrations that take place throughout the year (most notably the Easter Festival); and León's location as a necessary travel point of the Camino de Santiago, a UNESCO World Heritage site. During the ten days that elapse from Friday to Easter Sunday, thousands of people parade through the city with special costumes according to tradition.

The Museum of León, opened in the nineteenth century, is the oldest in the province and is dedicated to telling the city story through archaeology, art, and ethnography. The Museum of the Collegiate Church of San Isidoro is highlighted by the Pantheon of the Kings. The Sierra-Pambley Museum shows the domestic life of an enlightened nineteenth-century family. The Cathedral of Santa Maria, the Basilica of San Isidoro, the Convent of San Marcos, and other religious places are also worth visiting.

Hostels in León are scattered throughout the city and there is not a place where you can find concentration of León hostels. Generally, you can find a hostel in León in almost all neighborhoods and prices do not differ much among León hostels -- almost all of them have average prices without exceptions in the low- or high-price bracket. It is very beneficial for travelers that León hostels also offer great service and hostel conditions, as well as excursions in the city.

We've collected the most common questions for hostels in León. The more you know, the better you can plan with confidence and ease, right?

This makes Hostelz.com the best place to find cheap accommodation in León.

Above we list every single hostel there is in the city. Let us take a broader look at what you can expect - and what not. We created this cheatsheet for you to get a more complete picture of the hostel quality in León, average prices and types of hostels to choose from.
8 Total number of hostels
$34 Average dorm price
$106 Average private room price
$20 Cheapest hostel in León
Globetrotter Urban&Hostel is the cheapest
2 Party hostels in León
Albergue Santo Tomás de Canterbury is the best rated
8.6 Average rating of all hostels

Travel Tips for León - from the Community

Travel Tips for León - from the Community

Oh man, so far no one from the community has left a comment or travel tips for León. How about you kick start the discussion here? Gather your best backpacking recommendations for León and jot them down below. The community thanks you.