Welcome to your detailed guide for hostels in Sabie, South Africa. You can choose from 2 Sabie hostels. In total, there are 2 cheap places to stay in Sabie such as guesthouses and bnbs. Prices start from $9 for a dorm.

This section is dedicated to take away all your "I wish someone had told me that before I went!" experiences. This way, you are better prepared for what to expect, what not to expect and can spend less time settling in, and more time making new friends in your chosen hostel. We share our insider knowledge of tips, tricks and important things to look out for in Sabie. To help you make friends with Sabie before you visit, we've included a few helpful and fun things you should know about the area. Enjoy! 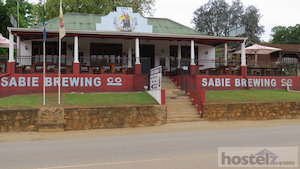 Sabie, South Africa, sits in beautiful hilly, forested surroundings and is a terrific base from which to explore Kruger National Park, sixty-four kilometers east; Blyde River Canyon; and the Panorama Route. There are several waterfalls in the area to discover with beautiful views from Long Tom mountain pass, nine kilometers southwest on the road to Lydenburg.

The town itself is small enough to discover on foot and is full of history. A late-ninteteenth-century gold rush established the town, and there are still a few of the old buildings standing, notably the Trading Store. The Trading Store was built in the twenties, St. Peter's Anglican Church was dedicated in the early twentieth century, and the Huntingdon Residence was built in the late nineteenth century. The tourist office in Market Square is very useful for local maps and helpful advice; you can also check online for information on walks, hikes, and biking routes in the area. There are two supermarkets, several international ATMs, and plenty of accommodations for all budgets (including Sabie, South Africa hostels). Sabie even has its own brewery, producing hand-crafted beers. Tours around the brewery are available, but book in advance, as they need a minimum of four people.

There are plenty of frequently asked questions about hostels in Sabie. We've collected the most common questions and doubts when it comes to picking your preferred accommodation in Sabie. The more you know, the better you can plan with confidence and ease, right?

How to find hostels in Sabie?

Hostelz.com shows all 2 Hostels in Sabie. Simply filter by neighborhood and price to find your perfect budget place to stay.

What are the best hostels in Sabie for groups?

Sabie Gypsy's Backpackers is the best hostel in Sabie for groups.

What is the best way to find cheap accommodation in Sabie?

This makes this very website the best place to find cheap accommodation in Sabie.

What are the best party hostels in Sabie?

Billy Bongo Backpackers is the best rated hostel for partying in Sabie.
It offers: Bar.

Travel Tips for Sabie - from the Community

Oh man, so far no one from the community has left a comment or travel tips for Sabie. How about you kick start the discussion here? Gather your best backpacking recommendations for Sabie and jot them down below. The community thanks you.

Hostel? Check! Now let's have at your hostel packing list for Sabie and South Africa.