1 Hostel in Muizenberg available. Prices start from $9 for a dorm bed.
We compare all hostel prices in Muizenberg for you. So you save money and time!

This section is dedicated to take away all your "I wish someone had told me that before I went!" experiences. This way, you can spend less time settling in, and more time making new friends in your chosen hostel. We share our insider knowledge of tips, tricks and important things to look out for in Muizenberg.

Guess what? Muizenberg is also named and spelled Muizenburg - It is the same destination. Goodbye confusion. 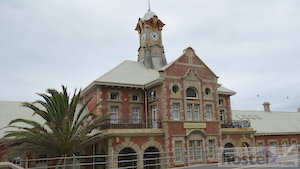 Muizenberg (Muizenburg), South Africa, is a suburb of Cape Town, around twenty-five kilometers south of the city center. It is very well known as surfers' spot and is very busy on weekends. It has a long, powdery sand beach and is an upmarket retreat for the well-heeled in Cape Town. White sharks are often seen here and there is a shark-watch team on duty to keep swimmers safe. This is mainly a surfers' hangout, though, and they can be seen in dozens on the waves early in the morning.

Muizenberg has a magnificent backdrop. The Table Mountain National Park rises sharply up to the west and there are mountain trails to be discovered. There has been a settlement here for more than three hundred fifty years; one of the oldest buildings in Muizenberg is Het Posthuys, the old post house, built in the seventeenth century. Among the other historic buildings in Muizenberg, there is Rhodes Cottage, where Cecil Rhodes died in the early twentieth century, and is preserved as a museum. Casa Labia, now a hotel, and Bailey's Cottage, between the railway line and the beach, were both built within decades of each other in the early twentieth century,

There is a plaque commemorating the small but significant Battle of Muizenberg in the late eighteenth century, when the British began their occupation of the Cape and some of the cannons from this battle can be seen outside the old post house. All of these are on or near the main road going south to St. James. A number of other older buildings can be seen from this road, including quite a few in the Art Deco style.

Muizenberg is an easy day trip from Cape Town center by Metrorail train. The journey takes no more than forty minutes and Golden Arrow buses also make this trip.

We've collected the most common questions for hostels in Muizenberg. The more you know, the better you can plan with confidence and ease, right?

This makes Hostelz.com the best place to find cheap accommodation in Muizenberg.

Above we list every single hostel there is in the city. Let us take a broader look at what you can expect - and what not. We created this cheatsheet for you to get a more complete picture of the hostel quality in Muizenberg, average prices and types of hostels to choose from.
1 Total number of hostels
1 Party hostels in Muizenberg
African Soul Surfer is the best rated
8 Average rating of all hostels

Travel Tips for Muizenberg - from the Community

Travel Tips for Muizenberg - from the Community

Hey fam! Here are a few more tips from the community, from them to you, and you to them. This space is dedicated for travellers to share their best tips on backpacking Muizenberg. Have a closer look - the Hostelz community share real hidden gems, insider knowledge and overall impressions of Muizenberg. Everyone is welcome to add something useful, funny, unexpected and the "absolutely necessary to know before you go" - share, share and then share a little more!