Welcome to your detailed guide for hostels in Kosi Bay, South Africa. You can choose from 2 Kosi Bay hostels. In total, there are 2 cheap places to stay in Kosi Bay such as guesthouses and bnbs. Prices start from $9 for a dorm.

This section is dedicated to take away all your "I wish someone had told me that before I went!" experiences. This way, you are better prepared for what to expect, what not to expect and can spend less time settling in, and more time making new friends in your chosen hostel. We share our insider knowledge of tips, tricks and important things to look out for in Kosi Bay. To help you make friends with Kosi Bay before you visit, we've included a few helpful and fun things you should know about the area. Enjoy! 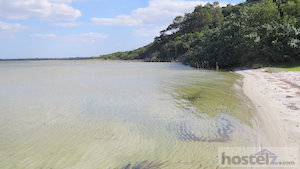 Kosi Bay, South Africa, is in the far north of KwaZulu Natal, just a few kilometers from the Mozambique border and a little over four hundred kilometers from Durban. Access is via the town of Manguzi. Kosi Bay isn't itself a town, rather a collection of tiny, scattered settlements running alongside a four-lake system just inland from the shore. The lakes form the extreme north of the Isimangaliso Wetland Reserve, known for its variety of habitats and varied wildlife.

The four lakes are linked by rivers and decrease in salinity as you go further from the sea. The easiest lake to visit under your own steam is Third Lake, as there is an occasional pickup running to the KZN Wildlife campsite on the shores of the lake. Both vervet and samango monkeys are commonly seen in the forest around Third Lake and there is a network of walking trails into the forest.

Kosi Mouth is the estuary and is well-known for its clear water and abundant fish species. Snorkeling here is very rewarding. If you arrive at the right time of year (between November and February), you could witness either loggerhead or leatherback turtles nesting. Dolphins and whales are commonly seen in the waters off the coast, sometimes quite close to shore. Whale-watching season is generally between June and November, but dolphins, manta rays, and whale sharks can be seen year round.

Backpackers will find Kosi Bay, South Africa hostel accommodation in two locations, both accessed from Mangusi town and reached by pickups from there. Kosi Bay hostels offer good, clean accommodation and a variety of trips and activities on foot, horseback, or boat. There are also volunteering opportunities here. If you intend to self-cater, bring all your food with you, as the few village tuck shops have only very basic provisions.

This is a beautiful area to visit, but it is difficult to see the area without your own transport or without taking a tour. If you want to relax in lovely scenery and peace and quiet, that can be done, too.

There are plenty of frequently asked questions about hostels in Kosi Bay. We've collected the most common questions and doubts when it comes to picking your preferred accommodation in Kosi Bay. The more you know, the better you can plan with confidence and ease, right?

How to find hostels in Kosi Bay?

Hostelz.com shows all 2 Hostels in Kosi Bay. Simply filter by neighborhood and price to find your perfect budget place to stay.

What is the best way to find cheap accommodation in Kosi Bay?

This makes this very website the best place to find cheap accommodation in Kosi Bay.

Travel Tips for Kosi Bay - from the Community

Oh man, so far no one from the community has left a comment or travel tips for Kosi Bay. How about you kick start the discussion here? Gather your best backpacking recommendations for Kosi Bay and jot them down below. The community thanks you.

Hostel? Check! Now let's have at your hostel packing list for Kosi Bay and South Africa.