1 Hostel in George available. Prices start from $9 for a :roomType.
We compare all hostel prices in George for you. So you save money and time!

This section is dedicated to take away all your "I wish someone had told me that before I went!" experiences. This way, you are better prepared for what to expect, what not to expect and can spend less time settling in, and more time making new friends in your chosen hostel. We share our insider knowledge of tips, tricks and important things to look out for in George. To help you make friends with George before you visit, we've included a few helpful and fun things you should know about the area. Enjoy! 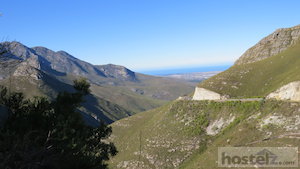 Hiking is one of the best things to do when you base yourself in George, South Africa. Go for a hike in the Witfontein Nature Reserve and hike up to Craddock Peak over an eighteen-kilometer trail or take the Outeniqua trail and enjoy the beautiful forests and the scenic view from the seven-hundred-twenty-meter high peak. Although George, South Africa, is not directly on the Indian Ocean, it is still a good place from which to visit the beaches. The beaches close to George are less crowded than those on the Garden Route and Mossel Bay. Herolds Bay Beach is sixteen kilometers from George city centre and the smaller Victoria Bay is eleven kilometers to the east.

George, South Africa, is a city in the Western Cape province and generally considered the gateway to the scenic Garden Route. George is located on the western side of the Garden Route. It is the largest city in the region with a population of one hundred fifty-seven thousand. While there are many travelers that just pass through George to visit smaller towns on the Garden Route, George, South Africa and its surroundings also have things to offer to anyone open to extending his or her time on the Garden Route. The best way to go anywhere outside George’s city centre is by rental car, both for convenience and safety reasons.

As mentioned before, George is the gateway to the Garden Route. Wilderness is only a fifteen-minute drive from George and can easily be visited on a day trip from your hostel in George. A bit further from George, but also possible as a day trip, are the Ostrich farms close to the city of Oudtshoorn.

There are plenty of frequently asked questions about hostels in George. We've collected the most common questions and doubts when it comes to picking your preferred accommodation in George. The more you know, the better you can plan with confidence and ease, right?

This makes this very website the best place to find cheap accommodation in George.

Hostel? Check! Now let's have at your hostel packing list for George and South Africa.

Above we list every single hostel there is in the city. Let us take a broader look at what you can expect - and what not. We created this cheatsheet for you to get a more complete picture of the hostel quality in George, average prices and types of hostels to choose from.
1 Total number of hostels
8.4 Average rating of all hostels

Travel Tips for George - from the Community

Travel Tips for George - from the Community

Oh man, so far no one from the community has left a comment or travel tips for George. How about you kick start the discussion here? Gather your best backpacking recommendations for George and jot them down below. The community thanks you.