3 hostels available. Prices start from $9 for a dorm bed.
We compare all hostel prices in Omsk for you. So you save money and time!

This section is dedicated to take away all your "I wish someone had told me that before I went!" experiences. This way, you can spend less time settling in, and more time making new friends in your chosen hostel. We share our insider knowledge of tips, tricks and important things to look out for in Omsk. 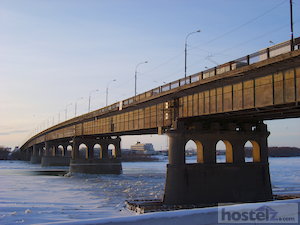 Omsk, Russia, is known as one of the stops of the Trans-Siberian Railway. It takes more than a day and a half to get from Omsk to Moscow (Russia's capital) by train, or three hours by plane. Omsk has an airport with regular flights to Moscow and other Russian cities as well as international flights to Europe and some Asian countries. The airport is located on the left bank of Irtysh and can be reached by bus or by mini-bus. Omsk railway station is located in a beautiful old building. Visitors usually take a taxi or catch a bus to go to the city center.

Hostels in Omsk, Russia, are located not only on the right side from the Irtysh River, which is more busy, but also in some green areas far away from the city center. However, it can be hard to reach those Omsk, Russia hostels by means of public transportation.

Omsk is believed to be a small town, but it is actually a large city with a lot of means of public transportation. There are buses, trolley-buses, trams and mini-buses ("marshrutkas") in Omsk. Traffic jams are not uncommon in the area. The city government had to postpone the construction of the metro system in Omsk due to the lack of funds.

Omsk is surrounded by marvelous pine woods and grassy plains. The woody area of Chernoluchie several kilometres away from Omsk is one of the favourite place (besides Russian dacha) for citizens to go during the summer. Inside the city there are several parks with lots of trees (the infrastructure is under development). Omsk has also two amusement parks.

The main Omsk river is called Irtysh, and there is a smaller river called Om. Some lakes can be found in the parks located far from the city center. The city streets are quite flat, however some promontories are observed on the right bank of Irtysh (for example, the main city avenue Lubinsky Prospect is located on a hill).

In the south Omsk borders with Kazakhstan. The climate changes drastically throughout the year -- it can be as low as thirty-five degrees Celsius below zero in winter and as high as forty degrees Celsius above zero in summer. It can also get quite windy and dusty there. In autumn and spring, Omsk gets muddy because of frequent rains and snow melting. Omsk winter is cold and snowy like a real Siberian winter, with lots of snow and trees covered with hoarfrost.

Omsk was built as a fortress in the eighteenth century. You can take a walk down by Tarskaya Street in the city center to see the restored Tara gates and Tobolsk gates left from the fortress. Several cathedrals and churches located in the city center are also worth visiting such as a newly build Omsk Dormition Cathedral (known as Uspensky Cathedral) and Neoclassical cathedral of St. Nicholas. In the region you can go to Achair Monastery with beautiful woodcarving to Okunevo Lake, which is believed to be magic, or to a big zoo in Bolsherechye. It is better to plan your trip for a day, as it can be hard to find cheap Omsk, Russia hostels in the Omsk region (some guesthouses and hotels can be found, though).

Omsk has several high schools, including some technical institutes with good reputations, as well as Omsk State University. The youngsters usually gather on Shoqan Walikhanov Street in the city center.

To go shopping in Omsk you can head to the mall "Omskiy" in the city center. There are also "Flagman" and "Kontinent" shopping malls in Omsk. International retailers are presented by IKEA. As for cultural life, Omsk has several points of interest, such as the Omsk Theatre of Drama (it looks like a smaller copy of Mariinsky theatre in St. Petersburg and is the biggest in Siberia) and Mikhail Vrubel Museum of Fine Arts in front of it on Lenina Street; State Music Theatre of Omsk; and the Museum of Dostoevsky, a world-famous Russian writer who served a prison sentence in Omsk in the nineteenth century.

Nightlife is based mainly in the city center. One of the most famous figures of not only Omsk, but also the Russian music scene was Yegor Letov whose punk rock band Grazhdanskaya Oborona ("Civil Defense") was in the avant-garde of anticommunist activities in Russia in the eighties.

Omsk gets lively in the beginning of August. On the first Sunday of August, the City Days Festival takes place -- cheerful people march down Lenina Street, and the Flora flower market is held near the Dostoevsky Museum. The celebration finishes with huge fireworks upon the River Irtysh. In August, Omsk is also flooded by runners, who participate in the annual Siberian International Marathon.

There are plenty of frequently asked questions about hostels in Omsk. We've collected the most common questions and doubts when it comes to picking your preferred accommodation in Omsk. The more you know, the better you can plan with confidence and ease, right?

This makes this very website the best place to find cheap accommodation in Omsk.

Above we list every single hostel there is in the city. Let us take a broader look at what you can expect - and what not. We created this cheatsheet for you to get a more complete picture of the hostel quality in Omsk, average prices and types of hostels to choose from.
3 Total number of hostels
2.8 Average rating of all hostels

Travel Tips for Omsk - from the Community

Travel Tips for Omsk - from the Community

Oh man, so far no one from the community has left a comment or travel tips for Omsk. How about you kick start the discussion here? Gather your best backpacking recommendations for Omsk and jot them down below. The community thanks you.