Welcome to your detailed guide for hostels in Kathmandu, Nepal. You can choose from 56 Kathmandu hostels. In total, there are 149 cheap places to stay in Kathmandu such as guesthouses and bnbs. Prices start from $3 for a dorm.

Above we list every single hostel there is in the city. Let us take a broader look at what you can expect - and what not. We created this cheatsheet for you to get a more complete picture of the hostel quality in Kathmandu, average prices and types of hostels to choose from.

(32 Steps Hostel is the cheapest)

Most Kathmandu hostels are located in

Hostels in Kathmandu for all Traveller Types

from $4
Best for Solo Traveller

Travelling on your own to Kathmandu? Fabulous!

Pick a great hostel designed with solo travellers in mind, and you're bound to meet plenty of like-minded people who have also dared to venture to Kathmandu alone. Here are the top hostels for solo travellers in Kathmandu. We've also highlighted which hostel offers special perks you, as a solo traveller, will love. Each hostel offers great social spaces to meet fellow backpackers and wonderful opportunities for making new friends. You'll soon realise that travelling on your own definitely does not mean travelling alone.

This section is dedicated to take away all your "I wish someone had told me that before I went!" experiences. This way, you are better prepared for what to expect, what not to expect and can spend less time settling in, and more time making new friends in your chosen hostel. We share our insider knowledge of tips, tricks and important things to look out for in Kathmandu. To help you make friends with Kathmandu before you visit, we've included a few helpful and fun things you should know about the area. Enjoy! 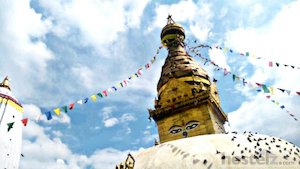 Kathmandu is a city filled with ancient architecture, culture, and just a small infusion of modern tourism. In this capital of Nepal, there is no lack of entertainment for the adventure-hungry traveler. There are also numerous hostels scattered throughout Kathmandu, although they might be referred to as an “inn” or “house” rather than a proper hostel.

As one of the most touristy locations of the city, Thamel district is a great starting point for your travel itinerary. In this spot, you will find bustling streets filled to the brim with restaurants, shops, as well as lodgings which should meet all your basic needs. Among the different hotels, there will be accommodations akin to hostels, including modern structures offering affordable, clean rooms and bonuses such as free wifi. Once you have gotten yourself and your belongings settled, you can easily visit many attractions within walking distance.

If your belly is starting to rumble, some Kathmandu hostels offer meals on their grounds. Otherwise, pick one of the numerous restaurants to satisfy your appetite for the richly flavored, spicy dishes of Indian cuisine. Another option is to participate in one of the cooking classes offered along the streets so that you can take the gift of Indian flavor back home as a souvenir.

Within a short walking distance of Thamel, you can visit the Kathmandu Durbar Square, a UNESCO World Heritage Site. There you will encounter the intricate detail and astounding vision of 17th and 18th century Nepalese architecture and art. This is the place where monarchs were crowned. You will set your sights on several palaces and temples. Among the ancient architecture is Kashmandap, a temple built from the wood of a single tree, which is the inspiration for the city’s name. You will also be able to visit Kushmari Ghar, the house of the only living goddess of Nepal.

Just to the south of Durbar Square, you can walk the iconic Jhochhen Tole, otherwise known as Freak Street. It acquired its English nickname during the 1960s and 70s when hippies frequented the area to indulge in cheap fun. Nowadays, it has become a quieter street where you can see just remnants of the hippie culture as well as some more Kathmandu hostels.

Also within a short walking distance of Thamel, you will encounter the mesmerizing view of the Garden of Dreams. A beautifully kept wonderland of fountains, flowers, sculptures, gazebos, and even a cafe situated within a palace, this site has been restored to its current beauty with the financial assistance of the Austrian government.

If you happen to be visiting during the Holi Festival, a two-day event during spring sometime in February or March, then you are in for a colorful surprise. Known as the “festival of colors” and the “festival of sharing love,” this Hindu celebration has young and old alike running through the streets, throwing dry powder and colored watered onto each other. When you end up all covered in a rainbow of colors and completely exhausted, you will be glad to retreat to a hostel to rest up for the next day. You might want to make prior hotel reservations if you do choose to stay during the Holi Festival.

There are plenty of frequently asked questions about hostels in Kathmandu. We've collected the most common questions and doubts when it comes to picking your preferred accommodation in Kathmandu. The more you know, the better you can plan with confidence and ease, right?

How much are hostels in Kathmandu?

How to find hostels in Kathmandu?

Hostelz.com shows all 56 Hostels in Kathmandu. Simply filter by neighborhood and price to find your perfect budget place to stay.

Which hostels in Kathmandu are good for families?

Sudha's Garden Home is the best hostel in Kathmandu for families.

What are the coolest hostels in Kathmandu for female solo travellers?

8848 Hostel and Hostel ONE96 are the best rated hostels in Kathmandu for female solo travellers.

What is the best way to find cheap accommodation in Kathmandu?

Hostelz.com compares prices for 56 hostels in Kathmandu, Nepal. We list for you other cheap places to stay in Kathmandu such as

This makes this very website the best place to find cheap accommodation in Kathmandu.

What are the best party hostels in Kathmandu?

8848 Hostel is the best rated hostel for partying in Kathmandu.
It offers: Bar.

Travel Tips for Kathmandu - from the Community

Hey fam! Here are a few more tips from the community, from them to you, and you to them. This space is dedicated for travellers to share their best tips on backpacking Kathmandu. Have a closer look - the Hostelz community share real hidden gems, insider knowledge and overall impressions of Kathmandu. Everyone is welcome to add something useful, funny, unexpected and the "absolutely necessary to know before you go" - share, share and then share a little more!

Yeah, you should visit KATHMANDU for sure. You can experience many more things that are waiting to surprise you. It is a city filled with great historical stuffs and last but not the least, you can be overwhelmed by the nice Nepalese people..

Kathmandu is still awesome, but Freak St. just isn't what it used to be. Bummer.

It is a very good city.

Hostel? Check! Now let's have at your hostel packing list for Kathmandu and Nepal.