2 hostels available. Prices start from $14 for a dorm bed.
We compare all hostel prices in Tsumeb for you. So you save money and time!

This section is dedicated to take away all your "I wish someone had told me that before I went!" experiences. This way, you are better prepared for what to expect, what not to expect and can spend less time settling in, and more time making new friends in your chosen hostel. We share our insider knowledge of tips, tricks and important things to look out for in Tsumeb. To help you make friends with Tsumeb before you visit, we've included a few helpful and fun things you should know about the area. Enjoy! 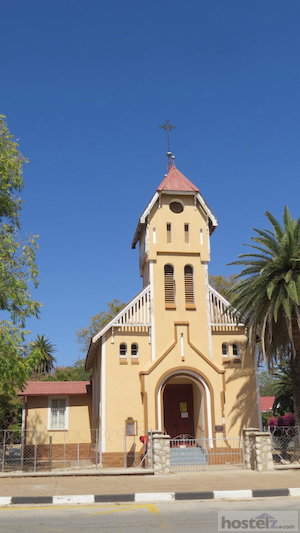 Located just over four hundred kilometers north of the capital Windhoek, the small and quiet Tsumeb, Namibia, is one the access points for the world famous Etosha National Park. It boasts plentiful accommodation options, including excellent budget dorm beds in Tsumeb, Namibia hostels, and is a very pleasant town to spend a couple of days, particularly if you've just arrived via the long Caprivi Strip Road.

The town itself has an interesting history. Founded by the German colonial power in the early twentieth century as a mining town, it still carries that heritage into the present day. The mine yielded deposits of copper, zinc, lead, silver, gold, and germanium. It was also home to more than two hundred forty different minerals, some only found here. The mine was closed in recent decades, but recently reopened again as a private concession.

Nowadays, that mining legacy can be seen in the Tsumeb Museum on Presidents Avenue in the northeast of town. The museum is sandwiched between two historic buildings of note -- the Catholic Church of St. Barbara, patron saint of mine workers, the first to be built in Tsumeb, and the Lutheran Church.

The Arts Performance Center, sponsored by a Swiss organization, is well worth a visit. The art gallery has some really inventive works and the center puts on shows or concerts every few weeks featuring their music students. Even if there's no show coming up, it'd be an hour or two well spent getting a free tour round the little studios.

Twenty kilometers northwest of Tsumeb is Lake Otjikoto, a sinkhole lake of unknown depth. Although this and the nearby Lake Guinas have been explored by scuba divers, they disappear into lateral cave systems that are too narrow to be further explored. Expeditions into Otjikoto have yielded up a number of interesting artifacts. The German army, when retreating under attack from South African forces in World War I, threw their weapons and supplies into Otjikoto. Some of these have been recovered and are on display in both the Tsumeb and Windhoek Museums.

A little over seventy-five kilometers south of Tsumeb, in a field, lies Hoba Meteorite. This is the largest meteorite in the world at around sixty tons, and is estimated at having landed there eighty thousand years ago. It was accidentally discovered by a farmer while ploughing in the early twentieth century, and subsequently excavated, but left in situ and is now a tourist attraction, having been declared a National Monument in the mid-twentieth century. It lies around twenty kilometers off the main Grootfontein-Tsumeb road C42.

Backpackers to Tsumeb have a choice of budget accommodation here. Hostel dorm beds are easy to find, though it pays to book ahead, particularly in tourist season (June-September and November-January). The excellent hostels in Tsumeb, Namibia, can book day trips to any of the above places of interest or to Etosha National Park some one hundred twenty kilometers west of Tsumeb, where there is a chance of spotting the very rare Black Rhino or the recently reintroduced Southern White Rhino. Etosha is also home to the Angolan Giraffe, a recently identified sub-species; leopard; lion; cheetah; caracal; and South African wildcat.

There are plenty of frequently asked questions about hostels in Tsumeb. We've collected the most common questions and doubts when it comes to picking your preferred accommodation in Tsumeb. The more you know, the better you can plan with confidence and ease, right?

This makes this very website the best place to find cheap accommodation in Tsumeb.

What are the best party hostels in Tsumeb?
Tsumeb Backpackers & Guesthouse Villa Africa is the best rated hostel for partying in Tsumeb.

Hostel? Check! Now let's have at your hostel packing list for Tsumeb and Namibia.

Travel Tips for Tsumeb - from the Community

Travel Tips for Tsumeb - from the Community

Oh man, so far no one from the community has left a comment or travel tips for Tsumeb. How about you kick start the discussion here? Gather your best backpacking recommendations for Tsumeb and jot them down below. The community thanks you.