1 Hostel in Inhambane available. Prices start from $11 for a dorm bed.
We compare all hostel prices in Inhambane for you. So you save money and time!

This section is dedicated to take away all your "I wish someone had told me that before I went!" experiences. This way, you can spend less time settling in, and more time making new friends in your chosen hostel. We share our insider knowledge of tips, tricks and important things to look out for in Inhambane. 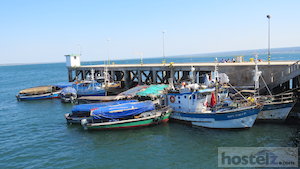 Inhambane, Mozambique, is a town located in a sheltered bay on the coast of Mozambique just under five hundred kilometers northeast of the capital Maputo. It's easiest to access -- particularly if coming from the north -- from the town of Maxixe on highway one. There are regular ferries across the bay. You choose whether to take the rather overcrowded private small boats or wait for the larger and more stable government boat.

Inhambane is one of the oldest settlements on Mozambique's east coast, with Persian traders here as early as the eleventh century arriving by dhow. It was initially known for its cotton, but later became a center for ivory and slave trading in the eighteenth century.

Inhambane is the gateway town to the much-visited Tofo and Barra beaches, and most travelers pass straight through Inhambane on their way to these beaches. That's a shame, because Inhambane is a very interesting and amazingly quiet town to wander. The architecture is interesting and varied from the Cathedral do Nossa Senhora de Conceicao, built in the eighteenth century, to the art deco cinema. There is also a small, old mosque built in the mid-nineteenth century on the waterfront road. Other examples of Arabic-, Indian-, and Portuguese-influenced architecture abound around the town; it's such a pleasant town in which to just wander aimlessly along its tree-lined streets.

A walk along the waterfront road will also reveal sightings of many water birds in the muddy bay; flamingos are commonly seen here.

There isn't too much in the way of accommodation in the town, though. If you are looking for hostels in Inhambane, Mozambique, you'll need to go to Tofo, where there are a few options. The Inhambane, Mozambique hostels that existed in the town in the past have been replaced by ones in the more tourist-friendly Tofo. It's a very easy, short journey by minibus between the two, so a stay at one of the Tofo hostels is equally as convenient to Inhambane town.

We've collected the most common questions for hostels in Inhambane. The more you know, the better you can plan with confidence and ease, right?

This makes Hostelz.com the best place to find cheap accommodation in Inhambane.

Above we list every single hostel there is in the city. Let us take a broader look at what you can expect - and what not. We created this cheatsheet for you to get a more complete picture of the hostel quality in Inhambane, average prices and types of hostels to choose from.
1 Total number of hostels
$11 Average dorm price
$11 Cheapest hostel in Inhambane
Pariango Beach is the cheapest
1 Party hostels in Inhambane
Pariango Beach is the best rated
7.9 Average rating of all hostels

Travel Tips for Inhambane - from the Community

Travel Tips for Inhambane - from the Community

Hey fam! Here are a few more tips from the community, from them to you, and you to them. This space is dedicated for travellers to share their best tips on backpacking Inhambane. Have a closer look - the Hostelz community share real hidden gems, insider knowledge and overall impressions of Inhambane. Everyone is welcome to add something useful, funny, unexpected and the "absolutely necessary to know before you go" - share, share and then share a little more!