Welcome to your detailed guide for hostels in Canggu, Indonesia. You can choose from 61 Canggu hostels. In total, there are 85 cheap places to stay in Canggu such as guesthouses and bnbs. Prices start from $4 for a dorm.

Above we list every single hostel there is in the city. Let us take a broader look at what you can expect - and what not. We created this cheatsheet for you to get a more complete picture of the hostel quality in Canggu, average prices and types of hostels to choose from.

Most Canggu hostels are located in

Hostels in Canggu for all Traveller Types

from $18
Best for Solo Traveller

from $9
Best for Female Solo Traveller

from $10
Best for Couples

Travelling on your own to Canggu? Fabulous!

Pick a great hostel designed with solo travellers in mind, and you're bound to meet plenty of like-minded people who have also dared to venture to Canggu alone. Here are the top hostels for solo travellers in Canggu. We've also highlighted which hostel offers special perks you, as a solo traveller, will love. Each hostel offers great social spaces to meet fellow backpackers and wonderful opportunities for making new friends. You'll soon realise that travelling on your own definitely does not mean travelling alone.

This section is dedicated to take away all your "I wish someone had told me that before I went!" experiences. This way, you are better prepared for what to expect, what not to expect and can spend less time settling in, and more time making new friends in your chosen hostel. We share our insider knowledge of tips, tricks and important things to look out for in Canggu. To help you make friends with Canggu before you visit, we've included a few helpful and fun things you should know about the area. Enjoy! 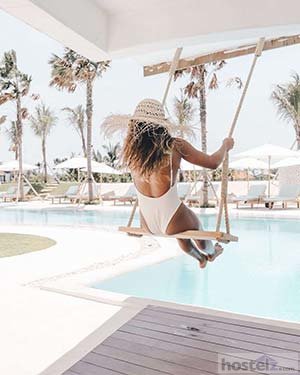 Canggu, Bali, Indonesia, is a beautiful little coastal town in Bali just north of Kuta. Unlike Kuta, however, Canggu remains a more peaceful alternative to the loud, incessant hustle that consumes the vast majority of Kuta. Conversely, Canggu does not lack for things to do. One of the most popular pastimes of those residing in Canggu is heading to one of the beautiful beaches along the coast and enjoying some of the better surf breaks (lessons and camps are available) in the world without having to endure the arduous process of wearing a wetsuit, as the water temperature is perfect. The beaches are also home to some of the most spectacular sunsets in Bali.

An up and coming town in Bali, Canggu features many stunning five-star resorts, hotels, and villas, and has developed a fairly sophisticated food culture. If you're thinking of traveling on a budget or to meet new people, Canggu offers an excellent assortment of Canggu, Bali, Indonesia hostels where you'll be able to share the power of laughter and camaraderie. All of the hostels in Canggu, Bali, Indonesia offer various types of accommodation, typically with breakfast included and many Canggu, Bali, Indonesia hostels are locally owned and operated which provides travelers with the chance to support local business. There is a tremendous variety of nice cafes, restaurants, creameries, and so much more. While Canggu remains smaller than Kuta, the nightlife is exceptional offering something unique each night and plenty of live music! At the forefront of this are the numerous and fantastic beach bars, which are busy on a nightly basis and filled with a wonderfully diverse mix of travelers, vacationers, and locals. If you feel like relaxing and treating yourself there a number of great and affordable spas around town.

The countryside and scenery in Canggu is nothing short of beautiful, as it seamlessly blends both old and new. Situated close to the eternal Tanah Lot, Canggu displays vast swathes of rice fields encompassed by mind blowing architecture. In addition, Canggu is home to the illustrious Nirwana golf course, which is widely regarded as the best in Indonesia and a must-visit for any avid golfer!

Approximately twelve kilometers north of Seminyak, along the route to Tanah Lot Temple, is the small fishing-village-turned-surfer's-paradise of Canggu. The roughly eight kilometers or so of volcanic black sand coastline that makes up the little town boasts seven stunning beaches -- Batu Boolong, Nelayan, Echo Beach, Pererenan, Selasih, Seseh Beach, and Mengening Beach. The currents and massive barrel waves here make the waters unsuitable for casual swimming, but prime for surfing, especially during the monsoon season.

Much quieter than its neighbors to the south, Canggu has a carefree, casual atmosphere with surfing its main attraction. The sleepy little fishing and farming village has a year-round population of surfers who come to ride the famous waves and enjoy the easy life. Since many of them return year after year, sometimes staying for years or even permanently, there is a small but welcoming resident expat community of writers, artisans, designers, and creative artists, along with cafe owners and chefs and aspiring yogis who have put down roots in Canggu. Almost everyone here seems to be on a first-name basis and the locals here are much friendlier than in other parts of Bali. There are very few, if any, touts on the streets or beaches, and none of them are pushy or aggressive.

Mouthwatering meals can be found all over Canggu, at restaurants serving Indonesian food as well as Western places. Free Wi-Fi is fast and easily found at most places, including the smaller local businesses. Nightlife is laid back but lively. Crowds tend to gather for sunset cocktails at the beachside bars on Pererenan Beach, Echo Beach, or Batu Boolong Beach. After dark, beach parties are also popular.

Bali is a relatively small island and much of it can be easily traversed by car or scooter. Most Canggu hostels will offer scooter or bike rentals or can arrange them upon request. Canggu hostel staff can help guests organize a self-guided route to explore the sights of Bali at their own pace. There are also a few travel agencies in town that offer onward transport tickets to various parts of Bali and the Gili Islands, and some can also arrange guided tours to popular tourist sites.

In addition to surfing and beautiful black sand beaches, Canggu offers a range of activities, including cycling and horseback riding. Recently, the charming pastoral town has begun to rival Ubud as a destination for yoga holidays. Studios are popular and plentiful, offering daily classes as well as teacher certification training, workshops, and immersive retreats.

The summer months bring crowds of surfers to Canggu and accommodations fill up quickly. The more popular hostels in Canggu will book out months in advance, so make sure to book early and online for the best deals!

There are plenty of frequently asked questions about hostels in Canggu. We've collected the most common questions and doubts when it comes to picking your preferred accommodation in Canggu. The more you know, the better you can plan with confidence and ease, right?

How much are hostels in Canggu?

How to find hostels in Canggu?

Hostelz.com shows all 61 Hostels in Canggu. Simply filter by neighborhood and price to find your perfect budget place to stay.

Which hostels in Canggu are good for couples?

Gypsy Moon Bali is the best hostel in Canggu for couples.

Which hostels in Canggu are good for families?

Griya Backpackers is the best hostel in Canggu for families.

What are the coolest hostels in Canggu for female solo travellers?

Nyaman Hostel and The Farm Hostel are the best rated hostels in Canggu for female solo travellers.

What is the best way to find cheap accommodation in Canggu?

Hostelz.com compares prices for 61 hostels in Canggu, Indonesia. We list for you other cheap places to stay in Canggu such as

This makes this very website the best place to find cheap accommodation in Canggu.

What are the best party hostels in Canggu?

Travel Tips for Canggu - from the Community

Oh man, so far no one from the community has left a comment or travel tips for Canggu. How about you kick start the discussion here? Gather your best backpacking recommendations for Canggu and jot them down below. The community thanks you.

Hostel? Check! Now let's have at your hostel packing list for Canggu and Indonesia.