Welcome to your detailed guide for hostels in Bangalore, India. You can choose from 32 Bangalore hostels. In total, there are 70 cheap places to stay in Bangalore such as guesthouses and bnbs. Prices start from $3 for a dorm.

Above we list every single hostel there is in the city. Let us take a broader look at what you can expect - and what not. We created this cheatsheet for you to get a more complete picture of the hostel quality in Bangalore, average prices and types of hostels to choose from.

(Heritage Time Traveller's is the cheapest)

Most Bangalore hostels are located in

Hostels in Bangalore for all Traveller Types

from $3
Best for Solo Traveller

from $9
Best for Female Solo Traveller

Travelling on your own to Bangalore? Fabulous!

Pick a great hostel designed with solo travellers in mind, and you're bound to meet plenty of like-minded people who have also dared to venture to Bangalore alone. Here are the top hostels for solo travellers in Bangalore. We've also highlighted which hostel offers special perks you, as a solo traveller, will love. Each hostel offers great social spaces to meet fellow backpackers and wonderful opportunities for making new friends. You'll soon realise that travelling on your own definitely does not mean travelling alone.

This section is dedicated to take away all your "I wish someone had told me that before I went!" experiences. This way, you are better prepared for what to expect, what not to expect and can spend less time settling in, and more time making new friends in your chosen hostel. We share our insider knowledge of tips, tricks and important things to look out for in Bangalore. To help you make friends with Bangalore before you visit, we've included a few helpful and fun things you should know about the area. Enjoy!

Guess what? Bangalore is also named and spelled Bengaluru - It is the same destination. Goodbye confusion. 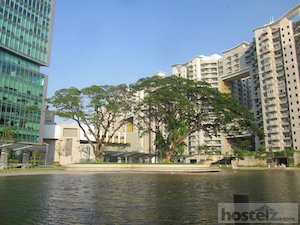 Popularly known as the “Garden City” of India on account of the lush greenery that meets the eye wherever you go, Bangalore (Bengaluru), India, is a hot spot for tourism throughout the year. It is the capital of Karnataka and fifth-largest city in India, and is filled with colorful parks and tree-lined streets. The city enjoys a pleasant climate throughout the year because of its elevation. A number of hostels in Bangalore (Bengaluru), India, dot the cityscape to cater to the large influx of tourists from within and outside the country.

Bangalore was once a retirement community for army personnel and later became a haven for anyone who wanted to get away from the bustle of city life. Today, the bustle of city life has caught up and overtaken this quiet little city as it has become the information technology capital of India. Many IT powerhouses like ISRO, Wipro, Infosys, Flipkart, and Biocon have established bases in Bangalore, bringing with them a culture that is as diverse as India is. Right from the moment you step into Bangalore, you will find eateries catering to different palates, shops that boast of multi-cultural ware, and hostels in Bangalore (Bengaluru), India, that accommodate families and individuals for a few hours to a few months.

As the day wears on, Bangalore’s amazing nightlife becomes evident when some of the country’s most happening discos and pubs come to life. One of the best places to hang out in the city is Brigade Road, where rows of shops lining both sides of the road have everything you need. You can shop for hours here, enjoy street food or gourmet dishes, refresh yourself with a tangy drink, or even stop off and enjoy the latest flick that’s hit the cinemas! If you’re visiting from out of the country, you can pick up some great souvenirs from different parts of India at great prices. Don’t forget to bargain, though, as vendors tend to hike prices based on each prospective buyer!

There are plenty of frequently asked questions about hostels in Bangalore. We've collected the most common questions and doubts when it comes to picking your preferred accommodation in Bangalore. The more you know, the better you can plan with confidence and ease, right?

How much are hostels in Bangalore?

How to find hostels in Bangalore?

Hostelz.com shows all 32 Hostels in Bangalore. Simply filter by neighborhood and price to find your perfect budget place to stay.

Which hostels in Bangalore are good for families?

The Little Blue Window Hostel is the best hostel in Bangalore for families.

What are the coolest hostels in Bangalore for female solo travellers?

Locul.Uptown and Woke HSR Layout are the best rated hostels in Bangalore for female solo travellers.

What is the best way to find cheap accommodation in Bangalore?

Hostelz.com compares prices for 32 hostels in Bangalore, India. We list for you other cheap places to stay in Bangalore such as

This makes this very website the best place to find cheap accommodation in Bangalore.

Travel Tips for Bangalore - from the Community

Hey fam! Here are a few more tips from the community, from them to you, and you to them. This space is dedicated for travellers to share their best tips on backpacking Bangalore. Have a closer look - the Hostelz community share real hidden gems, insider knowledge and overall impressions of Bangalore. Everyone is welcome to add something useful, funny, unexpected and the "absolutely necessary to know before you go" - share, share and then share a little more!

Beware of traffic. You can beat the traffic by using a two-wheeler for longer distances within the city and cycle for short distances. If you are a traveller, just use rental cycles (Yulu) or rental two wheelers (Bounce) for point-to-point solutions. For long term rentals, try wheelstreet / royalbrothers.

The city was rather beautiful earlier but has now become a bit more crowded. A growing number of IT companies have set up base here and made it more like a metropolis. The nice side about Bangalore, though, is the fact that there are many nice getaways which take you back to the good old days. Of course, if you love shopping, you'll never get tired here.

It is home to numerous public sector heavy industries, software companies, aerospace, telecommunications, machine tools, heavy equipment, and defense establishments. Bangalore is referred to as the Silicon Valley of India due to its pre-eminent position as the leading contributor to India's IT industry. Bangalore has developed into one of India's major economic hubs and was rated by CNN as the "Best place to do business" in the world. Apart from this, Bangalore is known as the "Garden City of India" because of its greenery and the presence of many public parks, including the Lal Bagh and Cubbon Park. It is such a serene and beautiful place to enjoy.

It's a beautiful city -- not very crowded and doesn't have particular rush-hours. It's a must go.

Hostel? Check! Now let's have at your hostel packing list for Bangalore and India.