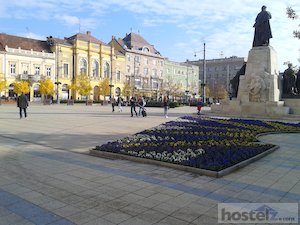 With over two hundred thousand residents, Debrecen is the second-largest city in Hungary after Budapest. It was in fact the largest Hungarian city in the eighteenth century and actually the capital of the country for a very short period of time. Nowadays, Debrecen is the capital of the Hajdú-Bihar County, which borders Romania on the east and is located in the Northern Great Plain region of Hungary.

The city lies somewhere around two hundred kilometres east of Budapest and can be easily reached by car, train, or plane. The are numerous ways to spend your time there, although it's true that the number of attractions can't really compete with the country's capital. Perhaps the most famous one is Nagytemplom or The Great Reformed Church, which is considered the symbol of the city, and was built in the early nineteenth century. Another popular spot is Hortobágy National Park -- the largest continuous grassland in Europe. Worth a look are also the world famous Déri Museum and a lovely zoological park. If you're looking for something more modern, you can spend your time in a state-of-the-art aquapark, Aquaticum, or various shopping malls throughout the city. Debrecen is also famous for its Flower Carnival, which is held in August every year and is a must see for any flower lover. The best way to get around the city is probably by using public transport -- there are trolleybuses and trams driving throughout the city.

The hostel options in Debrecen are very limited and somewhat normally priced, but since the city is not exactly flooded with tourists, you probably shouldn't have trouble getting a decent room.