7 hostels available. Prices start from $28 for a :roomType.
We compare all hostel prices in Lübeck for you. So you save money and time!

This section is dedicated to take away all your "I wish someone had told me that before I went!" experiences. This way, you are better prepared for what to expect, what not to expect and can spend less time settling in, and more time making new friends in your chosen hostel. We share our insider knowledge of tips, tricks and important things to look out for in Lübeck. To help you make friends with Lübeck before you visit, we've included a few helpful and fun things you should know about the area. Enjoy!

Guess what? Lübeck is also named and spelled Lubeck - It is the same destination. Goodbye confusion. 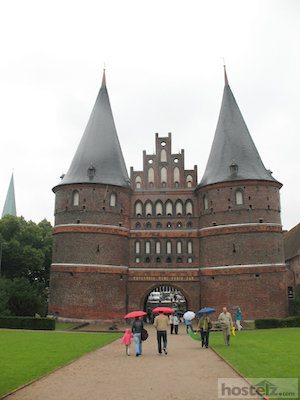 When meandering through the old town, you might get the impression that Lübeck stole all the pretty buildings in the region and squeezed as many of them as possible onto its island location. It's almost rude how much gorgeousness this city comprises in such a small space! UNESCO was equally charmed, and declared the old center a World Heritage Site.

Apart from architectural gems, it is also a mecca for literature lovers who pay homage to Thomas and Heinrich Mann or Nobel Prize winner Günther Grass. There is also an exquisite display of theatres, art galleries, and museums. A famous and rather unique attraction is the world's only water-puppet theater, staging an absolutely impressive one-of-a-kind show. Speaking of world famous, there also is marzipan! Niederegger Marzipan has been made here for more than two hundred years now; for many a visitor, this is the main reason for coming to Lübeck! A stunning array of more than three hundred sorts of the sweet gold is on offer, plus there's a museum and very popular cafe. Lübeck also has nice surroundings, as it's so close to the Baltic Sea and is a very good place for cycling (because it's all flat!).

Lübeck hostels are generally conveniently located in or very close the the old city center. They are of the smallish kind and don't receive masses of travelers, as Lübeck is not on the main backpacking route. It still makes sense to book in advance, as school groups might just book out whole hostels in Lübeck. So far no real charmer has been known amongst the Lübeck hostels; they are mainly functional and hardly atmospheric.

Getting to your Lübeck hostel will be easy with frequent train connections to the city. Once there a bit of walking will be involved as the train station is not on the central island but next to it. Some Lübeck hostels are just a couple of hundred meters from there, but others might be up to almost two kilometers away, which is still a leisurely, thirty-minute walk, though. Buses can be an alternative here and run frequently. It's also possible to travel the few kilometers to Travemünde by bus and from there sail off on a ferry to Scandinavia.

There are plenty of frequently asked questions about hostels in Lübeck. We've collected the most common questions and doubts when it comes to picking your preferred accommodation in Lübeck. The more you know, the better you can plan with confidence and ease, right?

This makes this very website the best place to find cheap accommodation in Lübeck.

What are the best party hostels in Lübeck?
schickSAAL is the best rated hostel for partying in Lübeck.

Hostel? Check! Now let's have at your hostel packing list for Lübeck and Germany.

Above we list every single hostel there is in the city. Let us take a broader look at what you can expect - and what not. We created this cheatsheet for you to get a more complete picture of the hostel quality in Lübeck, average prices and types of hostels to choose from.
7 Total number of hostels
$30 Average dorm price
$28 Cheapest hostel in Lübeck
schickSAAL is the cheapest
3 Party hostels in Lübeck
schickSAAL is the best rated
4.6 Average rating of all hostels

Travel Tips for Lübeck - from the Community

Travel Tips for Lübeck - from the Community

Oh man, so far no one from the community has left a comment or travel tips for Lübeck. How about you kick start the discussion here? Gather your best backpacking recommendations for Lübeck and jot them down below. The community thanks you.