8 hostels available. Prices start from $22 for a :roomType.
We compare all hostel prices in Frankfurt for you. So you save money and time!

This section is dedicated to take away all your "I wish someone had told me that before I went!" experiences. This way, you are better prepared for what to expect, what not to expect and can spend less time settling in, and more time making new friends in your chosen hostel. We share our insider knowledge of tips, tricks and important things to look out for in Frankfurt. To help you make friends with Frankfurt before you visit, we've included a few helpful and fun things you should know about the area. Enjoy!

Guess what? Frankfurt is also named and spelled Frankfurt am Main - It is the same destination. Goodbye confusion. 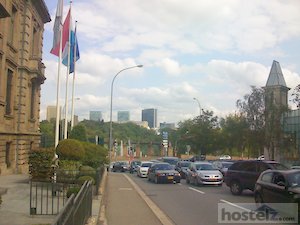 Frankfurt is famous as one of the major financial centers in Europe -- second only to London -- and also hosts the headquarters of some of the most powerful financial institutions in the world. Despite its relatively small size, it is one of the most expensive cities in the world. However, there are great deals at hostels in Frankfurt -- they are much cheaper and with better facilities than an average German hostel.

The city abounds with different sights -- the Römer, the Archaeological Garden, the Saint Bartholomew's Cathedral, the Paulskirche, the Alte Oper, and the Goethe House. Although it has many commercial buildings and skyscrapers, Frankfurt has many green parks -- the Mainuferpark, the Frankfurter Grüngürtel, the Wallanlagen, and the Nizza Park. The city has one of the largest trade fairs in the world -- the Frankfurt Trade Fair. The prices for Frankfurt hostels usually go up during the fair which is visited by businesspeople from the whole world.

Everything in the city, apart from Frankfurt hostels, is expensive. There are many places to go out, like clubs, restaurants, and bars, but the prices are high. It is a good idea to book in advance a Frankfurt hostel in order to optimize your budget. The city has outstanding public transportation and great connections by train, bus, car, and plane. Most Frankfurt hostels are located in the center of the city and are easily reached from the train station.

Frankfurt is a great place to visit as it has something for each visitor; it is not a city that you visit for a day or two. And if you are interested in business and finance, it is one of the best places to visit.

There are plenty of frequently asked questions about hostels in Frankfurt. We've collected the most common questions and doubts when it comes to picking your preferred accommodation in Frankfurt. The more you know, the better you can plan with confidence and ease, right?

This makes this very website the best place to find cheap accommodation in Frankfurt.

Hostel? Check! Now let's have at your hostel packing list for Frankfurt and Germany.

Above we list every single hostel there is in the city. Let us take a broader look at what you can expect - and what not. We created this cheatsheet for you to get a more complete picture of the hostel quality in Frankfurt, average prices and types of hostels to choose from.
8 Total number of hostels
$31 Average dorm price
$118 Average private room price
$23 Cheapest hostel in Frankfurt
Panorama Hostel is the cheapest
7 Party hostels in Frankfurt
Five Elements Hostel Frankfurt is the best rated
6.8 Average rating of all hostels

Travel Tips for Frankfurt - from the Community

Travel Tips for Frankfurt - from the Community

Oh man, so far no one from the community has left a comment or travel tips for Frankfurt. How about you kick start the discussion here? Gather your best backpacking recommendations for Frankfurt and jot them down below. The community thanks you.