1 Hostel in Erfurt available. Prices start from $28 for a dorm bed.
We compare all hostel prices in Erfurt for you. So you save money and time!

This section is dedicated to take away all your "I wish someone had told me that before I went!" experiences. This way, you are better prepared for what to expect, what not to expect and can spend less time settling in, and more time making new friends in your chosen hostel. We share our insider knowledge of tips, tricks and important things to look out for in Erfurt. To help you make friends with Erfurt before you visit, we've included a few helpful and fun things you should know about the area. Enjoy! 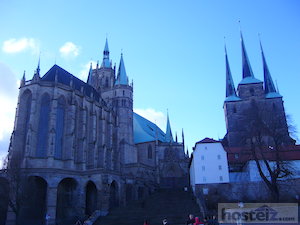 Erfurt was founded in the middle of the seventh century and it was mainly an autonomous city during the Medieval Ages. At the beginning of the nineteenth century, it became part of Prussia. After the World War II, the city became part of the German Democratic Republic and that slowed down its development despite that it was an important industrial city during the Communist regime. After the Reunification in the late twentieth century, there has been visible movement of locals to other bigger German cities.

In Erfurt, there are numerous museums with different collection priorities. The Erfurt City Museum with a functioning historic water mill; the Angermuseum with works of the expressionist Erich Heckel; and the Natural History Museum, built in the twenties, are only a few of them. The Old Synagogue in Erfurt is a former synagogue and with an age of over nine hundred years (it was reportedly built in the eleventh century), it is the oldest synagogue in Europe. The Erfurt Cathedral, the oldest and most important church in Erfurt, and the St. Severus Church are among the other tourist attractions.

Erfurt hostels are not very far from the city center and the train station and they can be easily reached by public transportation or even on foot. Hostels in Erfurt are not many and they are generally quite small, and sometimes it is hard to find a bed as all of them are booked out. Erfurt hostels have moderate prices and offer normal conditions for your money. There are no Erfurt hostels that stand out in terms of conditions and price; all of them are pretty much at the same level.

There are plenty of frequently asked questions about hostels in Erfurt. We've collected the most common questions and doubts when it comes to picking your preferred accommodation in Erfurt. The more you know, the better you can plan with confidence and ease, right?

This makes this very website the best place to find cheap accommodation in Erfurt.

Hostel? Check! Now let's have at your hostel packing list for Erfurt and Germany.

Above we list every single hostel there is in the city. Let us take a broader look at what you can expect - and what not. We created this cheatsheet for you to get a more complete picture of the hostel quality in Erfurt, average prices and types of hostels to choose from.
1 Total number of hostels
$28 Average dorm price
$74 Average private room price
$27 Cheapest hostel in Erfurt
Opera Hostel is the cheapest
8.8 Average rating of all hostels

Travel Tips for Erfurt - from the Community

Travel Tips for Erfurt - from the Community

Oh man, so far no one from the community has left a comment or travel tips for Erfurt. How about you kick start the discussion here? Gather your best backpacking recommendations for Erfurt and jot them down below. The community thanks you.