Hostels and Cheap Places to stay in Saint-Tropez, France

This section is dedicated to take away all your "I wish someone had told me that before I went!" experiences. This way, you are better prepared for what to expect, what not to expect and can spend less time settling in, and more time making new friends in your chosen hostel. We share our insider knowledge of tips, tricks and important things to look out for in Saint-Tropez. To help you make friends with Saint-Tropez before you visit, we've included a few helpful and fun things you should know about the area. Enjoy!

Guess what? Saint-Tropez is also named and spelled Saint Tropez - It is the same destination. Goodbye confusion. 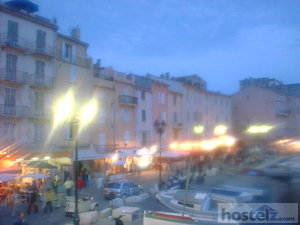 Ah, Saint-Tropez (Saint Tropez), French Riviera, France -- a place where the sunshine is so famous that there is a tanning lotion named after it. At least those poor souls who aren’t fortunate enough to visit the sun-kissed paradise in real life can get a tan reminiscent of this vacation destination in the south of France.

Located in the French Riviera approximately one hundred kilometres west of Nice, Saint-Tropez is known for being a luxurious beach vacation destination. In other words, the place is pure bliss. It even attracts A-list Hollywood stars such as Leonardo DiCaprio, Bono, Kate Moss, and Naomi Campbell, among others. Blonde bombshell Bridgitte Bardot, who rose to fame in the sixties, is one of Saint-Tropez’s most famous residents. Trying your hand at a little celebrity-spotting in Saint-Tropez is a must.

As the place is such an expensive playground for the rich and famous, there aren’t many Saint-Tropez (Saint Tropez), French Riviera, France hostels available. This makes booking a hostel in Saint-Tropez (Saint Tropez), French Riviera, France or other cheap accommodation a little more difficult than it would be in many other French cities that cater to tourists on a hostel budget. However, don’t be put off by this -- Saint-Tropez is still worth checking out. Camping is an option and if you don’t mind a bit of a drive, you could stay at a hostel in nearby Marseille or Nice, which are both roughly two hours’ drive away respectively. There are plenty of hostels in these locations, which is helpful for those who don’t have a lot of coin to splash around.

While exploring Saint-Tropez, there are many things worth seeing and doing. Check out the magnificent beaches, such as Escalate Beach and Plage de Pampelonne, and don’t forget to take a stroll around the Port de Saint Tropez and daydream about owning one of the expensive yachts anchored there.

The area also holds a wealth of interesting history -- the town was once a military stronghold, a fishing village, and the first town on the coast to be liberated during World War II. Once of the most intriguing historic attractions at Saint-Tropez is the Citadel de St-Tropez which was built in the seventeenth century as a defense against the Spanish. These days, its dungeons act as a museum, providing information on the history of humans at sea. Everything -- fishing, trading, exploring, and sea traveling and the navy -- is represented here. This spot also boasts one of the best views in Saint-Tropez, so it's worth checking out for that alone.

Travel Tips for Saint-Tropez - from the Community

Travel Tips for Saint-Tropez - from the Community