All Hostels in Marseille

Compare prices for hostels in Marseille with one click. Add your travel dates and see all prices on all hostel booking sites like Hostelworld, Hostelsclub and Booking.com. 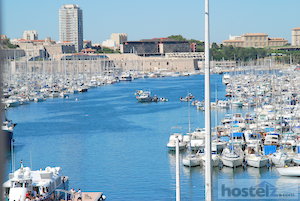 There is a few things you should know about Marseille hostels and the city in general. Besides comparing you the best and cheapest hostels in Marseille, we also highlight what we have liked, disliked and things to look out for.

Marseille is ripe for travelers to discover. You may have heard this city is often regarded as underdeveloped or even dangerous due to crime. Though there are problems in this city, they don't make it worth skipping. With a bit of a sense of adventure you'll not only tour the center with its historic port and architecture, but you can find your way to markets like Noailles Market, known for its African flair. Or you might take a morning out to the Calanques, Marseille's fjord and well-preserved natural area.

Getting around Marseille by public transportation is preferable. The metro and bus lines are frequent and easy to use, especially if you know enough French to ask for directions. Other forms of transportation are less preferable, but locals do drive, and bicyclists are starting to appear as well. Walking is sufficient if you're staying anywhere in the central district (1er).

Marseille hostels are typical of southern France, they are mostly medium-sized with considerably less than 100 beds, and offer a variety of service. Some have rules, as are common in traditional association hostels. For instance, one hostel prohibits alcohol consumption.

A cluster of hostels are located not far from the train station, Marseille St. Charles, and the historic center around Vieux-port. Others are further out of town, in the more tranquil suburbs of the city. Note that Marseille has a considerable crime rate, if you plan to hike through distant (possibly desolate) neighborhoods to get to your hostel. Crime is otherwise not much of an issue, although some areas around the city center are run-down.

Things to do in Marseille

Here is a few more tips from the community. Other travelers share their best tips on backpacking Marseille:

Marseille is not the picturesque, idyllic city in France that you have in your mind, but it has a totally different character and vibe to it, which attracted me immensely. It's brilliant.

This is a great city. The JFK coastal walk from Pointe Rouge beach into the Vieux Port is truly stunning -- turquoise water to one side of you and chalk mountains behind the city to the other side of you. There's lots to do and see here, truly undiscovered.

Marseille itself is not a very beautiful city.

We spent a few days in town and there is plenty to do. The downtown is colourful and the walk up and down to the cathedral is spectacular and so is the view. We made a daytrip to Cassis and really was worth it. One thing about Marseille is that it is a lot dirtier than other cities in France and beware of dog waste everywhere. Of course, we have found no city in France where the streets are not caked with it -- there seems to be no social outcry at all from locals.

Marseilles is a beautiful city with a very different character than most of France. Good luck and have fun.