Hostels and Cheap Places to stay in Colmar, France

There are no hostels in Colmar listed. We list for you other cheap places to stay in Colmar, France.
We compare all hostel prices in Colmar for you. So you save money and time!

This section is dedicated to take away all your "I wish someone had told me that before I went!" experiences. This way, you can spend less time settling in, and more time making new friends in your chosen hostel. We share our insider knowledge of tips, tricks and important things to look out for in Colmar. 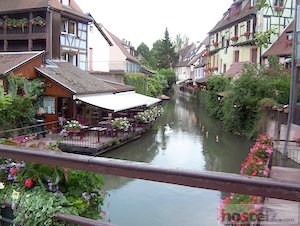 Colmar, Alsace, France, is a city with around sixty-eight thousand inhabitants in the Alsace region, in the east of France. The city is only around fourteen kilometres from the border between France and Germany. It is a popular tourist destination thanks to its lovely historic centre with well-preserved architectural landmarks. If you want to visit the area and you have to take a plane, check out flights to Strasbourg in France, Baden-Baden in Germany, or Basel in Switzerland. Numerous low-cost airlines offer flights to one of these three airports. Therefore, you will find an option for a cheap flight that meets your requirements. The closest of these three airports is the Euro Airport Basel-Mulhouse-Freiburg. It is actually located on the French side of the border triangle. From there you can take one of the regular trains or buses to get to Colmar.

During summer, the maximum temperature usually ranges from twenty-four to twenty-six degrees Celsius. The local microclimate is responsible for the low precipitation throughout the year. In winter, you can expect maximum average temperatures between five and seven degrees Celsius.

The so-called Little Venice is an area with canals and beautiful architecture. It is a perfect spot for pictures and popular on social media sites. There are numerous worth-seeing buildings in the centre; some of them -- such as Maison Pfister and Ancienne Douane, also known by the name of Koïfhus -- were built in the fifteenth and sixteenth century. Do not forget to check out the Maison des Tetes, the House of the Heads, as well. Fortunately, the Old Town is compact and it is easy to get around by foot.

Travel Tips for Colmar - from the Community

Travel Tips for Colmar - from the Community

Hey fam! Here are a few more tips from the community, from them to you, and you to them. This space is dedicated for travellers to share their best tips on backpacking Colmar. Have a closer look - the Hostelz community share real hidden gems, insider knowledge and overall impressions of Colmar. Everyone is welcome to add something useful, funny, unexpected and the "absolutely necessary to know before you go" - share, share and then share a little more!