1 Hostel in Torquay available. Prices start from $9 for a :roomType.
We compare all hostel prices in Torquay for you. So you save money and time!

This section is dedicated to take away all your "I wish someone had told me that before I went!" experiences. This way, you are better prepared for what to expect, what not to expect and can spend less time settling in, and more time making new friends in your chosen hostel. We share our insider knowledge of tips, tricks and important things to look out for in Torquay. To help you make friends with Torquay before you visit, we've included a few helpful and fun things you should know about the area. Enjoy!

Guess what? Torquay is also named and spelled Great Ocean Road - It is the same destination. Goodbye confusion. 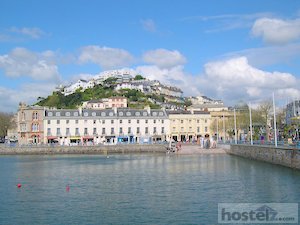 Torquay is a typical English seaside resort town, located on the South Devon coast, in the county of Devon, in the South West of the United Kingdom. Torquay has a lively nightlife, with many nightclubs, good restaurants, pubs (public houses), and bars. There are also a number of local fudge shops, selling a range of different flavoured homemade fudge and nougat. If you want to try some real British food, then try some fish, chips, and mushy peas from one of the many "chippies" located along the waterfront; just watch out for those seagulls, as they have been known to swipe food right out of unsuspecting tourists' hands.

The popular British comedy “Fawlty Towers,” which is about a slightly crazy hotelier called Basil Fawlty, is set here. Torquay is also the birthplace of Agatha Christie.

Bed and breakfasts (B&Bs) and hotels dominate the accommodation options in Torquay, with only a few Torquay hostels to be found. Some bed and breakfasts do, however, offer a dorm-style room, which includes a full English breakfast (bacon, sausages, toast, tomatoes, mushrooms, baked beans, eggs, and plenty of tea or coffee). Torquay hostels that can be found offer the usual hostel amenities, such as communal areas, complimentary breakfast, free Wi-Fi or internet access via modern connection, and free city maps and information about local events and activities.

During the winter months (December through February), many shops, bars, and restaurants close down for the low season. If you're visiting Torquay during this time, the town will be a lot quieter, and will be a completely different atmosphere compared to visiting during the summer months.

There are plenty of frequently asked questions about hostels in Torquay. We've collected the most common questions and doubts when it comes to picking your preferred accommodation in Torquay. The more you know, the better you can plan with confidence and ease, right?

This makes this very website the best place to find cheap accommodation in Torquay.

Hostel? Check! Now let's have at your hostel packing list for Torquay and England.

Above we list every single hostel there is in the city. Let us take a broader look at what you can expect - and what not. We created this cheatsheet for you to get a more complete picture of the hostel quality in Torquay, average prices and types of hostels to choose from.
1 Total number of hostels
6.6 Average rating of all hostels

Travel Tips for Torquay - from the Community

Travel Tips for Torquay - from the Community

Oh man, so far no one from the community has left a comment or travel tips for Torquay. How about you kick start the discussion here? Gather your best backpacking recommendations for Torquay and jot them down below. The community thanks you.