Hostels and Cheap Places to stay in Salisbury, England

There is no hostels in Salisbury listed. We list for you other cheap places to stay in Salisbury, England.
We compare all hostel prices in Salisbury for you. So you save money and time!

This section is dedicated to take away all your "I wish someone had told me that before I went!" experiences. This way, you are better prepared for what to expect, what not to expect and can spend less time settling in, and more time making new friends in your chosen hostel. We share our insider knowledge of tips, tricks and important things to look out for in Salisbury. To help you make friends with Salisbury before you visit, we've included a few helpful and fun things you should know about the area. Enjoy! 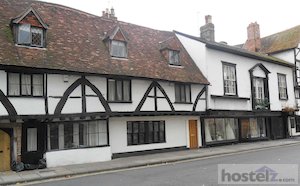 Salisbury is popular with tourists because of its close proximity to Stonehenge. Both the bus and train station are stops for the shuttle bus that can take you from your Salisbury hostel to Stonehenge (for a pretty steep fee), so it is not difficult to reach the ancient site. However, be sure to spend some time checking out the city of Salisbury itself, as it is home to plenty of history.

The must-see sight in Salisbury has to be the cathedral; not only does it have the tallest spire in the UK, but it also has the world's oldest working clock. The cathedral survived the London bombings in World War II because the Germans used it as a landmark to find London at night. It's also home to one of the four copies of the Magna Carta, which is on display as well. Aside from Stonehenge, Old Sarum is another interesting historical landmark -- you can see the city of Salisbury from the site of Old Sarum, as well as some great scenic views of the surrounding countryside.

There are a few shopping centers and grocery shops in the city, which isn't too large (mostly everything is within walking distance). Driving around the city is a bit problematic, since there aren't any major motorways leading to the city, so it can get fairly congested during peak driving times, but there are a few parking lots, so parking isn't ever too difficult.

The attraction of Stonehenge siphons off a good deal of tourists from the city so it's not always very crowded (especially when the weather is bad), so take time to explore the various historical sights around the city.

Hostel? Check! Now let's have at your hostel packing list for Salisbury and England.

Travel Tips for Salisbury - from the Community

Travel Tips for Salisbury - from the Community

Oh man, so far no one from the community has left a comment or travel tips for Salisbury. How about you kick start the discussion here? Gather your best backpacking recommendations for Salisbury and jot them down below. The community thanks you.