25 hostels available. Prices start from $20 for a dorm bed.
We compare all hostel prices in Zadar for you. So you save money and time!

This section is dedicated to take away all your "I wish someone had told me that before I went!" experiences. This way, you can spend less time settling in, and more time making new friends in your chosen hostel. We share our insider knowledge of tips, tricks and important things to look out for in Zadar. 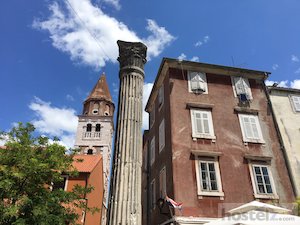 Zadar, a Croatian city on the Adriatic Sea, is the center of the Zadar County and the Northern Dalmatian District. The Zadar area has been inhabited since the Stone Age. Before the settlement of the Illyrian tribes, this area was inhabited by ancient Mediterranean people who were later assimilated by other civilizations. Later, the city was part of the Roman Empire; it was ruled by the Ostrogoths, Venice, Austria, and Italy.

The population of Zadar is more than seventy thousand, but it can rise in the summer when tourists can outnumber the local population. Most visitors come to the city because of the sandy beaches, the summer festivals, and the parties (the city is truly one of the best summer party places in Europe), but there is a lot else to see and do in Zadar, as the city is very beautiful. You can visit the Church of St. Donat from the ninth century, built on the ruins of a Roman Forum; the Cathedral of St. Anastasia in Gothic style; the Archaeological Museum in Zadar, founded in the nineteenth century; and the Church of St. Simon.

The city is a paradise for budget travelers, as there are so many Zadar hostels that it is very hard to choose one. Not surprisingly, most property owners choose to base their Zadar hostels near the beach because Zadar is one of the most famous summer resorts in Croatia. Even so, most Zadar hostels operate all year long and you will not have a problems booking a Zadar hostel, even during a snowy winter. Most Zadar hostels offer excellent facilities and service at moderate prices. Some Zadar hostels go even further and offer an airport pickup or transport to some of the summer festivals near Zadar.

There are plenty of frequently asked questions about hostels in Zadar. We've collected the most common questions and doubts when it comes to picking your preferred accommodation in Zadar. The more you know, the better you can plan with confidence and ease, right?

This makes this very website the best place to find cheap accommodation in Zadar.

What are the best party hostels in Zadar?
The Lazy Monkey Hostel is the best rated hostel for partying in Zadar.

Above we list every single hostel there is in the city. Let us take a broader look at what you can expect - and what not. We created this cheatsheet for you to get a more complete picture of the hostel quality in Zadar, average prices and types of hostels to choose from.
25 Total number of hostels
$26 Average dorm price
$99 Average private room price
$19 Cheapest hostel in Zadar
Sky Hostel is the cheapest
11 Party hostels in Zadar
The Lazy Monkey Hostel is the best rated
7.4 Average rating of all hostels

Travel Tips for Zadar - from the Community

Travel Tips for Zadar - from the Community

Hey fam! Here are a few more tips from the community, from them to you, and you to them. This space is dedicated for travellers to share their best tips on backpacking Zadar. Have a closer look - the Hostelz community share real hidden gems, insider knowledge and overall impressions of Zadar. Everyone is welcome to add something useful, funny, unexpected and the "absolutely necessary to know before you go" - share, share and then share a little more!