1 Hostel in Rovinj available. Prices start from $9 for a :roomType.
We compare all hostel prices in Rovinj for you. So you save money and time!

This section is dedicated to take away all your "I wish someone had told me that before I went!" experiences. This way, you are better prepared for what to expect, what not to expect and can spend less time settling in, and more time making new friends in your chosen hostel. We share our insider knowledge of tips, tricks and important things to look out for in Rovinj. To help you make friends with Rovinj before you visit, we've included a few helpful and fun things you should know about the area. Enjoy! 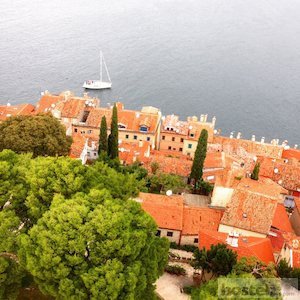 Rovinj, Croatia -- located on the Istrian Peninsula, north of the Dalmatian coast and just south of Slovenia -- is one of the country’s most beautiful, old coastal towns. It may be suitable to call Rovinj the next Cinque Terre, for just like said Italian coastal area, travel writers have praised Rovinj and rated it one of the three top destinations in all of Croatia; they liken it to a “Little Venice,” and say it is the most Italian town in Croatia’s most Italian region. Aside from Venetian cultural influence, Rovinj’s Old Town is built straight onto the water, with a port on one side and rows of crumbling, colorful homes on the other. Less visited than Cinque Terre or Croatian cities Split and Dubrovnik, Rovinj is an idyllic treasure trove of Mediterranean flavor.

While most affordable hostels in Rovinj, Croatia, are located outside the Old Town, none are far from the port and city center, where restaurants selling fresh seafood and homemade pasta line the cobblestone streets, and a tree-topped hill leads to a chapel overlooking the sea on three sides. The church’s tower is open to climb, and its stunning views are more than worth the winding staircase and small entrance cost. Terrace seating at a restaurant in the port offers fantastic sunset dining, and rocky beaches give adventurers exciting dive spots. Then there’s the gelato, which is just as good as and cheaper than the stuff across the Adriatic.

Croatia is filled with guesthouses and apartments for rent called Sobe, so many of the country’s “hostels” are simply guesthouses renovated or in disguise. There is a true Rovinj, Croatia hostel with large dormitories located at the entrance of the city, with guesthouses and apartments either right in the Old Town or a ten- to fifteen-minute walk up the road that leads to the highway. It can be expected that in the coming years, the numbers of Rovinj, Croatia hostels will increase substantially, along with its backpacker and general tourist numbers. For now, though, the city remains rather undiscovered, waiting for you.

There are plenty of frequently asked questions about hostels in Rovinj. We've collected the most common questions and doubts when it comes to picking your preferred accommodation in Rovinj. The more you know, the better you can plan with confidence and ease, right?

This makes this very website the best place to find cheap accommodation in Rovinj.

Hostel? Check! Now let's have at your hostel packing list for Rovinj and Croatia.

Above we list every single hostel there is in the city. Let us take a broader look at what you can expect - and what not. We created this cheatsheet for you to get a more complete picture of the hostel quality in Rovinj, average prices and types of hostels to choose from.
1 Total number of hostels
1 Party hostels in Rovinj
Roundabout Hostel is the best rated
6 Average rating of all hostels

Travel Tips for Rovinj - from the Community

Travel Tips for Rovinj - from the Community

Oh man, so far no one from the community has left a comment or travel tips for Rovinj. How about you kick start the discussion here? Gather your best backpacking recommendations for Rovinj and jot them down below. The community thanks you.