Welcome to your detailed guide for hostels in Bol, Croatia. You can choose from 2 Bol hostels. In total, there are 6 cheap places to stay in Bol such as guesthouses and bnbs. Prices start from $9 for a dorm.

This section is dedicated to take away all your "I wish someone had told me that before I went!" experiences. This way, you are better prepared for what to expect, what not to expect and can spend less time settling in, and more time making new friends in your chosen hostel. We share our insider knowledge of tips, tricks and important things to look out for in Bol. To help you make friends with Bol before you visit, we've included a few helpful and fun things you should know about the area. Enjoy! 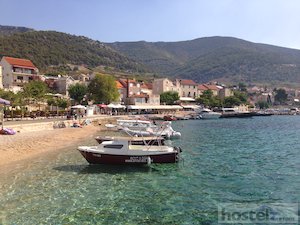 Bol is a city in Croatia that is famous for its location. It is found on the island of Brac in Croatia, situated on the Dalmatian Coast of the country. It is a number one tourist spot because of its romantic location, family-friendly activities, and unique setting. The local cuisine is also very different from what is considered normal food. Local people are fun, friendly, and welcoming.

There are some hostels in Bol, with more around it as well. You should be able to find a cheap hostel if you look in the city. It is growing more popular though, so you may want to book your stay in advance. Try to find a hostel as close to the Zlatni Rat Beach as you can. No, it doesn’t have rats. This long beach with pebbly, golden sand is almost a peninsula, with blue water around it.

While the beach is fine, the wine in Bol is finer. The Stina Winery can be found in the main promenade of the city. In action since 2009, this winery makes wine from grapes grown locally, and it has some of the finest wines in Croatia.

If you want a journey into the past, check out the Blaca Monastery and Museum. Built in the 16th century by two refugee monks, the monastery features a cave and a church that surrounds it. Today, it is a museum with over 8000 books, old pianos, armor, telescopes, and other artifacts that were bought by the monks using wine and honey.

An even more attractive monastery in Bol is the Dragon’s Cave. This is one of four largest monasteries thought to be built in a cave in the 15th century. You start the tour of the cave in the city and head up to the hills with a two-hour hike. Inside, there are ancient carvings depicting parts of Croatia’s colorful history.

There are plenty of frequently asked questions about hostels in Bol. We've collected the most common questions and doubts when it comes to picking your preferred accommodation in Bol. The more you know, the better you can plan with confidence and ease, right?

How to find hostels in Bol?

Hostelz.com shows all 2 Hostels in Bol. Simply filter by neighborhood and price to find your perfect budget place to stay.

Which hostels in Bol are good for families?

Hostel Kiki is the best hostel in Bol for families.

What is the best way to find cheap accommodation in Bol?

Hostelz.com compares prices for 2 hostels in Bol, Croatia. We list for you other cheap places to stay in Bol such as

This makes this very website the best place to find cheap accommodation in Bol.

Travel Tips for Bol - from the Community

Oh man, so far no one from the community has left a comment or travel tips for Bol. How about you kick start the discussion here? Gather your best backpacking recommendations for Bol and jot them down below. The community thanks you.

Hostel? Check! Now let's have at your hostel packing list for Bol and Croatia.