17 hostels available. Prices start from $12 for a dorm bed.
We compare all hostel prices in San Andrés for you. So you save money and time!

This section is dedicated to take away all your "I wish someone had told me that before I went!" experiences. This way, you can spend less time settling in, and more time making new friends in your chosen hostel. We share our insider knowledge of tips, tricks and important things to look out for in San Andrés.

Guess what? San Andrés is also named and spelled Isla San Andrés - It is the same destination. Goodbye confusion. 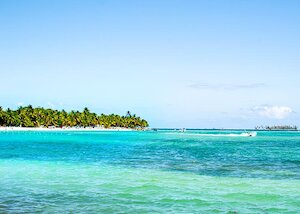 Isla San Andres is an island in the Caribbean Sea, more than 700km off the Colombian coast. Historically, San Andres is tied to the United Kingdom but is politically part of present-day Colombia. It is part of a UNESCO Biosphere Reserve called the Seaflower Biosphere Reserve. Go for the rich marine life, sparkling white beaches, relaxed Caribbean lifestyle, birdwatching, and lush mountain views among the national parks.

The capital of the island is also San Andres but is typically called El Centro or North End; it is on the northern end of the island and is the main urban centre.

Budget hostel accommodation on Isla San Andres is found in and around El Centro. The majority of backpacker hostels are along the coastal road at the north of the island, but there are a few hostels toward La Loma and Loma Cave, which you should visit once you have your accommodation sorted. San Andres is only 12.5km from north to south and 3km from east to west, so getting around the island is very simple. To get here, fly to Aeroporto Internacional Gustavo Rojas Pinilla. From there, buses or taxis can take you right to your accommodation.

If you’re a keen scuba diver, snorkeller, or simply a beach fan, you will feel right at home here. Johnny Cay, a popular beach and coral reef on Isla Sucre, is only 1.5km offshore. It’s easy to catch a boat across for dinner at one of the many seafood restaurants or bars on the island. Outside of El Centro, you can get around the island in less than half a day. Don’t miss the Old Point Mangle Regional Park, with its extensive mangrove system, the Big Pond Lagoon, a freshwater lake where you can view alligators, native birds, and turtles, or the colourful San Luis beaches, in the south where few tourists venture.

There are plenty of frequently asked questions about hostels in San Andrés. We've collected the most common questions and doubts when it comes to picking your preferred accommodation in San Andrés. The more you know, the better you can plan with confidence and ease, right?

This makes this very website the best place to find cheap accommodation in San Andrés.

What are the best party hostels in San Andrés?
Blue Almond Hostel - San Andres is the best rated hostel for partying in San Andrés.

Travel Tips for San Andrés - from the Community

Travel Tips for San Andrés - from the Community

Oh man, so far no one from the community has left a comment or travel tips for San Andrés. How about you kick start the discussion here? Gather your best backpacking recommendations for San Andrés and jot them down below. The community thanks you.