Welcome to your detailed guide for hostels in Pasto, Colombia. You can choose from 2 Pasto hostels. In total, there are 3 cheap places to stay in Pasto such as guesthouses and bnbs. Prices start from $9 for a dorm.

This section is dedicated to take away all your "I wish someone had told me that before I went!" experiences. This way, you are better prepared for what to expect, what not to expect and can spend less time settling in, and more time making new friends in your chosen hostel. We share our insider knowledge of tips, tricks and important things to look out for in Pasto. To help you make friends with Pasto before you visit, we've included a few helpful and fun things you should know about the area. Enjoy! 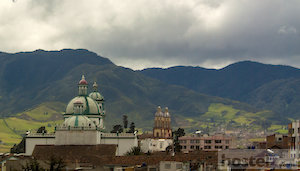 Most people breeze through Pasto, Colombia, either on their way down to the Ecuadorean border or on their way north to Popayán from the border. While most people don't generally stay here, if they do, then it is usually one night to break up the long journey between Quito and Popayán.

For the hostels in Pasto, Colombia, that are located in the downtown area, navigating the city centre is fairly easy. It is a bustling mecca where cars don't stop to let you walk on the green man and people are everywhere hustling on the dirty streets. While it's not the prettiest of Colombian cities, it does have somewhat of a charm to it, given how few tourists it attracts. It is locals going about local day-to-day business and definitely interesting to observe despite most Colombians from other cities telling you not to bother.

There are a few different museums that you can visit, such as the Museo del Oro, and also a few nice churches if you have time to explore while you're here. There are loads of restaurants and places to eat down Calle Seventeen, and if you are in the mood to do a spot of clothing or shoe shopping, they have a load of these shops doing good deals down the same street.

Pasto is one of those places that is interesting enough to spend a day, but if you skip out on it and keep moving, then don't be stressed, as there is nothing hugely noteworthy to see here. But if you've got the time, it's a decent rest spot.

There are plenty of frequently asked questions about hostels in Pasto. We've collected the most common questions and doubts when it comes to picking your preferred accommodation in Pasto. The more you know, the better you can plan with confidence and ease, right?

How to find hostels in Pasto?

Hostelz.com shows all 2 Hostels in Pasto. Simply filter by neighborhood and price to find your perfect budget place to stay.

What is the best way to find cheap accommodation in Pasto?

Hostelz.com compares prices for 2 hostels in Pasto, Colombia. We list for you other cheap places to stay in Pasto such as

This makes this very website the best place to find cheap accommodation in Pasto.

What are the best party hostels in Pasto?

Casa Hospedaje La Bohemia is the best rated hostel for partying in Pasto.
It offers: Bar.

Travel Tips for Pasto - from the Community

Oh man, so far no one from the community has left a comment or travel tips for Pasto. How about you kick start the discussion here? Gather your best backpacking recommendations for Pasto and jot them down below. The community thanks you.

Hostel? Check! Now let's have at your hostel packing list for Pasto and Colombia.