3 hostels available. Prices start from $9 for a :roomType.
We compare all hostel prices in Armenia for you. So you save money and time!

This section is dedicated to take away all your "I wish someone had told me that before I went!" experiences. This way, you are better prepared for what to expect, what not to expect and can spend less time settling in, and more time making new friends in your chosen hostel. We share our insider knowledge of tips, tricks and important things to look out for in Armenia. To help you make friends with Armenia before you visit, we've included a few helpful and fun things you should know about the area. Enjoy! 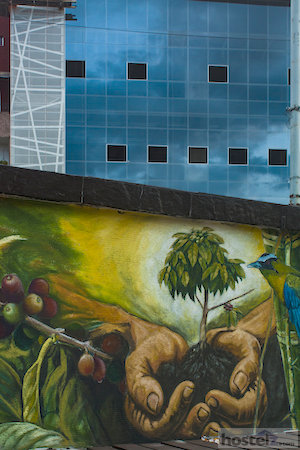 Armenia is a city in the mountainous, coffee-growing region of Colombia, on the northwestern coast of South America. It is the capital of the Quindio Department, between Medellin, Bogota, and Cali. The city was devastated by an earthquake in 1999 and has seen quite a bit of rebuilding in the last seventeen years; it is now one of the top tourist destinations in Colombia. Many travellers pass through Colombia on their way to coffee plantations or the Los Nevados National Park, where snow falls year round. There are also two agricultural theme parks near Armenia. The first is the Colombian National Coffee Park, where you can see each precise step of the coffee-making process, and the second is Panaca, where you can learn about and interact with the region’s agriculture and animals.

Budget hostel accommodation in Armenia can be found on the north side of the city, where most businesses moved post-earthquake, or on the road out to the airport. There are also a few hostels in the foothills of the Los Nevados mountains as well, which are perfect to use as a base for hikers. The hostels in Colombia are traditional backpacker hostels, with shared rooms and facilities; don’t expect luxury settings or air-conditioning in most places though.

After the earthquake, Armenia built a new airport, El Eden International Airport (near La Tebaida), which has direct flights from Bogota, Medellin, and Fort Lauderdale. The city is about a six hour drive from Bogota, Medellin, and Cali. Transport within the city is relatively easy as there are city and regional buses as part of the Friendly City transport initiative.

The main attractions in Armenia are the city centre. Don't miss the modern, post-earthquake Catedral La Inmaculada Concepcion and the Plaza la Bolivar, or the El Parque de La Vida, near the city centre. In the north end of the city, where most shopping, dining, and nightlife are, check out the Museo del Oro de Quimbaya.

There are plenty of frequently asked questions about hostels in Armenia. We've collected the most common questions and doubts when it comes to picking your preferred accommodation in Armenia. The more you know, the better you can plan with confidence and ease, right?

This makes this very website the best place to find cheap accommodation in Armenia.

What are the best party hostels in Armenia?
Casa Quimbaya Backpackers Hostel is the best rated hostel for partying in Armenia.

Above we list every single hostel there is in the city. Let us take a broader look at what you can expect - and what not. We created this cheatsheet for you to get a more complete picture of the hostel quality in Armenia, average prices and types of hostels to choose from.
3 Total number of hostels
$39 Average private room price
2 Party hostels in Armenia
Casa Quimbaya Backpackers Hostel is the best rated
2.9 Average rating of all hostels

Travel Tips for Armenia - from the Community

Travel Tips for Armenia - from the Community

Oh man, so far no one from the community has left a comment or travel tips for Armenia. How about you kick start the discussion here? Gather your best backpacking recommendations for Armenia and jot them down below. The community thanks you.