3 hostels available. Prices start from $7 for a dorm bed.
We compare all hostel prices in Xining for you. So you save money and time!

This section is dedicated to take away all your "I wish someone had told me that before I went!" experiences. This way, you can spend less time settling in, and more time making new friends in your chosen hostel. We share our insider knowledge of tips, tricks and important things to look out for in Xining.

Guess what? Xining is also named and spelled Xi'ning - It is the same destination. Goodbye confusion. 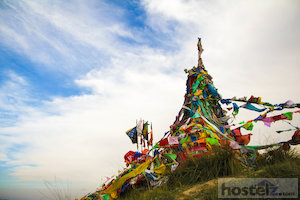 Have a hankering to visit Tibet but can’t manage the visa and expensive flight? Have Xinjiang’s safety warnings scared you away? Then Qinghai— a Chinese province lodged between disputed territories of Tibet to the south and Xinjiang to the north— is the destination for you. A hub for both Buddhist and Muslim minorities and the geographical home to both frozen deserts and the beginnings of the Tibetan plateau, Qinghai is a blend of all of western China’s most fascinating aspects. At the heart of its province, sitting at a comfortable 2,275 meters above sea level, is its capital city of Xining.

Xining is the fly-in destination for most travelers headed to Qinghai, though it is not usually the only stop. Not far from enormous Buddhist monasteries, China’s largest lake, seas of sand dunes, and small Tibetan communities, Xining is a jumping off point for tourists and backpackers alike. Historically, the city served a similar purpose, acting as a large refuge point for nomadic communities flooding in and out. Most of the city’s hostels today take advantage of this same philosophy; run by Tibetan families, they open their doors for fellow nomad travelers.

Hostels in Xining are few and far between, so you won’t have to make difficult decisions regarding the location of your choice of hostel. Downtown Xining is small and walkable, filled with streets selling local produce, breads, and Yak meat. This is most likely where any Xining hostel will be located and all of the city’s restaurants and nightlife can be found. As soon as you have settled into a hostel somewhere in Xining, you will be set to explore the city on foot.

The city’s most famous two sites are both religious but fundamentally different; one is the Dongguan Mosque that blends Muslim and Chinese architecture and serves the city’s large Muslim community. The other is Kumbum Monastery (Ta’er Si), the religious center of Buddhist monks and followers of the Yellow Hat Sect. This is an enormous site with miles of walking paths that could easily take up a full day. Another great walking destination is one of the city’s many surrounding peaks, Laji Shan, where colorful Tibetan prayer flags await you at the summit.

There are plenty of frequently asked questions about hostels in Xining. We've collected the most common questions and doubts when it comes to picking your preferred accommodation in Xining. The more you know, the better you can plan with confidence and ease, right?

This makes this very website the best place to find cheap accommodation in Xining.

Above we list every single hostel there is in the city. Let us take a broader look at what you can expect - and what not. We created this cheatsheet for you to get a more complete picture of the hostel quality in Xining, average prices and types of hostels to choose from.
3 Total number of hostels
$8 Average dorm price
$8 Cheapest hostel in Xining
Hehung Hostel is the cheapest
3 Party hostels in Xining
Hehung Hostel is the best rated
Most Xining hostels are located in
Chendong District, Chengdong District
4.9 Average rating of all hostels

Travel Tips for Xining - from the Community

Travel Tips for Xining - from the Community

Oh man, so far no one from the community has left a comment or travel tips for Xining. How about you kick start the discussion here? Gather your best backpacking recommendations for Xining and jot them down below. The community thanks you.