3 hostels available. Prices start from $9 for a :roomType.
We compare all hostel prices in Nanjing for you. So you save money and time!

This section is dedicated to take away all your "I wish someone had told me that before I went!" experiences. This way, you are better prepared for what to expect, what not to expect and can spend less time settling in, and more time making new friends in your chosen hostel. We share our insider knowledge of tips, tricks and important things to look out for in Nanjing. To help you make friends with Nanjing before you visit, we've included a few helpful and fun things you should know about the area. Enjoy! 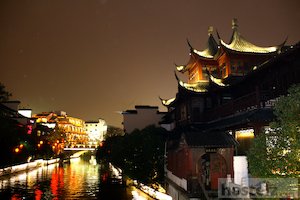 Nanjing, China -- whose name is literally translated from Mandarin as “South Capital” -- is one of China’s old capital cities located on the mainland’s eastern coast and built on the banks of the Yangtze River. A destination in its own right, Nanjing is filled with fascinating sights, enormous parks, and one of the world’s most beautiful and heart wrenching museums, but it is also only a short distance from the more frequently visited Shanghai. Whether you’re planning to come for only a weekend from Shanghai or to give the city more time, Nanjing will not disappoint.

With just over three-and-a-half million residents, Nanjing is considered a small city for China, but it isn’t short on history. The Ming Tombs date back to Emperor Hongwu (born in the fourteenth century), and can be found in the enormous Zhongshan Park. The park is named after Sun Yat Sen, the founding father of the PRC (People’s Republic of China), who was buried there in the twenties. Just south of the railway station and near Zhongshan is another park, Xuanwu Lake, a permanent fixture of the city whose own history is believed to date back to the second century AD. South of all these sites lies the Nanjing Massacre Memorial Hall, built in the eighties to commemorate the three hundred thousand victims of the Nanjing Massacre by the Imperial Japanese Army during the Second Sino-Japanese War. The museum is mostly outdoors, filled with haunting sculptures that are larger than life, and a grassy square representing future peace.

Like many Chinese cities, Nanjing is very spread out and is divided into residential districts. Most travelers will choose to stay near Xuanwu, a downtown district close to the station, both parks, and many Nanjing, China hostels. Though the metro system is not extensive and everything is far away, it is not necessarily a detriment to stay far from downtown. Buses are aplenty and taxis are cheap. Other hostels in Nanjing, China, can be found in Qinhuai, along the river of the same name, and Fuzimiao, both of which are a bit far from the parks but closer to the museums and Nanjing University. In coming years, Nanjing will no doubt grow as a top China tourist destination and more Nanjing, China hostels will build up all over this magnificent city.

There are plenty of frequently asked questions about hostels in Nanjing. We've collected the most common questions and doubts when it comes to picking your preferred accommodation in Nanjing. The more you know, the better you can plan with confidence and ease, right?

This makes this very website the best place to find cheap accommodation in Nanjing.

Hostel? Check! Now let's have at your hostel packing list for Nanjing and China.

Above we list every single hostel there is in the city. Let us take a broader look at what you can expect - and what not. We created this cheatsheet for you to get a more complete picture of the hostel quality in Nanjing, average prices and types of hostels to choose from.
3 Total number of hostels
1 Party hostels in Nanjing
Nanjing Fuzimiao International Youth Hostel is the best rated
Most Nanjing hostels are located in
FuZiMiao
4.6 Average rating of all hostels

Travel Tips for Nanjing - from the Community

Travel Tips for Nanjing - from the Community

Oh man, so far no one from the community has left a comment or travel tips for Nanjing. How about you kick start the discussion here? Gather your best backpacking recommendations for Nanjing and jot them down below. The community thanks you.