10 hostels available. Prices start from $10 for a dorm bed.
We compare all hostel prices in Plovdiv for you. So you save money and time!

This section is dedicated to take away all your "I wish someone had told me that before I went!" experiences. This way, you are better prepared for what to expect, what not to expect and can spend less time settling in, and more time making new friends in your chosen hostel. We share our insider knowledge of tips, tricks and important things to look out for in Plovdiv. To help you make friends with Plovdiv before you visit, we've included a few helpful and fun things you should know about the area. Enjoy! 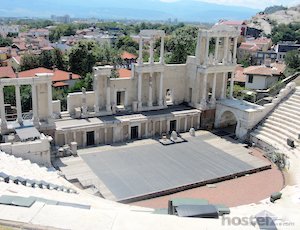 Plovdiv is a very beautiful city in Bulgaria which is just a few hours from Sofia and Bourgas. Istanbul is also not far from it and there are cheap buses that go there. It's underrated as it can offer its visitors a reat experience.

There are many hostels in Plovdiv and most of them were opened in the last few years. There are three major spots where Plovdiv hostels are located: the first is near the central train station, the second is near the Plovdiv University and the third is in the Old Town. Hostels in Plovdiv do not differ much in price with a few exceptions. Hostels in the Old Town are a bit hard to find as the streets are small and the whole place looks like a labyrinth but the view is amazing. However, the Old Town is in the center so you can go there easily even if your hostel is in other place. Taxis are very cheap and a better option than public transportation.

Plovdiv has been inhabited since ancient times and is one of the few constantly inhabited places in the world for the last several thousands years. It has been a major city in Medieval Ages, during the Ottoman rule, after the Independence, and now as well. There are many sights from almost any time in history and only a few cities in Bulgaria can match Plovdiv. It has two Roman theatres, more than 10 museums, Roman stadium, mosques, cathedrals and churches and of course, the Old Town which has preserved many houses with architecture from the 19th century.

There is an airport which serves a few lines to Europe. The airport is far from the city – about 25 km and there is only one bus that stops there once a day only on days when there are flights. The bus is often overcrowded. Otherwise, train connections are very good and you can go to any place in Bulgaria within a day and there are several old monasteries less than 100 km, the most famous of which is Bachkovo.

Food in Plovdiv is ridiculously cheap and you can have a great lunch for 3-4 Euros at a restaurant. There are bars and clubs for any taste and pocket and night life is quite good. There is also an annual trade fair which attracts many international companies. You need to spend at least several days in Plovdiv.

There are plenty of excellent hostels in Plovdiv and the Hostelz.com Plovdiv Hostels list is the best way to find the right hostel for your trip.

There are plenty of frequently asked questions about hostels in Plovdiv. We've collected the most common questions and doubts when it comes to picking your preferred accommodation in Plovdiv. The more you know, the better you can plan with confidence and ease, right?

This makes this very website the best place to find cheap accommodation in Plovdiv.

What are the best party hostels in Plovdiv?
Bed & Bike Rooms is the best rated hostel for partying in Plovdiv.

Hostel? Check! Now let's have at your hostel packing list for Plovdiv and Bulgaria.

Above we list every single hostel there is in the city. Let us take a broader look at what you can expect - and what not. We created this cheatsheet for you to get a more complete picture of the hostel quality in Plovdiv, average prices and types of hostels to choose from.
10 Total number of hostels
$11 Average dorm price
$32 Average private room price
$10 Cheapest hostel in Plovdiv
Hostel Old Plovdiv is the cheapest
4 Party hostels in Plovdiv
Bed & Bike Rooms is the best rated
Most Plovdiv hostels are located in
Old Town
6.4 Average rating of all hostels

Travel Tips for Plovdiv - from the Community

Travel Tips for Plovdiv - from the Community

Hey fam! Here are a few more tips from the community, from them to you, and you to them. This space is dedicated for travellers to share their best tips on backpacking Plovdiv. Have a closer look - the Hostelz community share real hidden gems, insider knowledge and overall impressions of Plovdiv. Everyone is welcome to add something useful, funny, unexpected and the "absolutely necessary to know before you go" - share, share and then share a little more!