This section is dedicated to take away all your "I wish someone had told me that before I went!" experiences. This way, you can spend less time settling in, and more time making new friends in your chosen hostel. We share our insider knowledge of tips, tricks and important things to look out for in Bandar Seri Begawan. 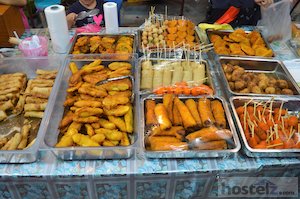 Bandar Seri Begawan, often referred to as BSB, is the capital city of the Nation of Brunei. Brunei is located on the island of Borneo. Bandar Seri Begawan is the city with the most interesting places to visit for travelers and the only place providing hostels in the country. BSB is much more developed than most other cities in Southeast Asia. Poverty hardly exists, although immigrants are poorer than natives.

As most places of interest are located within Bandar Seri Begawan or easily accessible via a day trip, BSB is a good base to explore Brunei. The area near the Sultan Omar Ali Saifuddien Mosque and the riverside can be considered as the city centre. As it is close to the ferry, bus station, and nearly all of the city’s places worth visiting, this area is the best place to book a hostel in Brunei and BSB in particular. Other places are accessible by bus during the day. From late afternoon on, only cabs are available.

Hostels in Bandar Seri Begawan generally offer small dorm rooms and a local vibe. They don't always have a hot shower facility, so you may want to check this before you book. Due to the low competition and cost of living, hostel prices are higher than in the rest of southeast Asia. The cost of food and non-alcoholic drinks are also more expensive than in surrounding countries. Alcoholic beverages are not for sale in Brunei, but it's allowed to bring a limited amount from other countries.

As mentioned before, most places worth visiting as a tourist are located within BSB. All the major sights are within walking distance from each other or a short ride by water taxi. Drivers will normally try to overcharge, so ask locals. Typical places to visit include the Sultan Omar Ali Saifuddien Mosque, the Kampong Ayer water village, the Istana Nurul Iman (the Sultan of Brunei’s residential palace), and the Jame'Asr Sultan Hassanil Bolkiah mosque. Within a 20- to 30- minute walk from the centre, visitors can find the Tasek Lama Recreational Park. This is a popular place for locals to go in their free time and a good starting point for hikes through the jungle, which is surprisingly close to the city’s centre. Visitors may see wild monkeys, crocodiles, lizards and other animal species if they’re lucky, especially when visiting in the early morning. The hike is easy and signs can be followed along the trails.

At BSB's riverside, visitors can find offers for day trips to go farther into (a different) jungle. Hostels or hotels in BSB may also sell tours into the jungle in Temburong.

A good time to visit Bandar Seri Begawan is around its national day or the birthday of the king. The city becomes more alive with several activities, markets and fireworks which continue for up to a week.

Travel Tips for Bandar Seri Begawan - from the Community

Travel Tips for Bandar Seri Begawan - from the Community