Welcome to your detailed guide for hostels in La Paz, Bolivia. You can choose from 27 La Paz hostels. In total, there are 59 cheap places to stay in La Paz such as guesthouses and bnbs. Prices start from $5 for a dorm.

Above we list every single hostel there is in the city. Let us take a broader look at what you can expect - and what not. We created this cheatsheet for you to get a more complete picture of the hostel quality in La Paz, average prices and types of hostels to choose from.

(Paitití Hostel is the cheapest)

(The Rooftop Bolivia is the best rated)

Most La Paz hostels are located in

Hostels in La Paz for all Traveller Types

from $5
Best for Solo Traveller

from $16
Best for Female Solo Traveller

Travelling on your own to La Paz? Fabulous!

Pick a great hostel designed with solo travellers in mind, and you're bound to meet plenty of like-minded people who have also dared to venture to La Paz alone. Here are the top hostels for solo travellers in La Paz. We've also highlighted which hostel offers special perks you, as a solo traveller, will love. Each hostel offers great social spaces to meet fellow backpackers and wonderful opportunities for making new friends. You'll soon realise that travelling on your own definitely does not mean travelling alone.

This section is dedicated to take away all your "I wish someone had told me that before I went!" experiences. This way, you are better prepared for what to expect, what not to expect and can spend less time settling in, and more time making new friends in your chosen hostel. We share our insider knowledge of tips, tricks and important things to look out for in La Paz. To help you make friends with La Paz before you visit, we've included a few helpful and fun things you should know about the area. Enjoy! 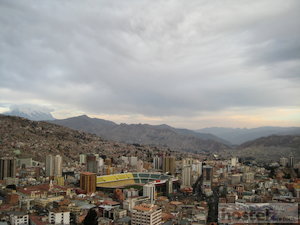 At at three thousand six hundred sixty meters, La Paz is the world´s highest city, which you will realize as you try to labour breathlessly up its unforgivingly steep, dusty, and noisy streets. Its more than one million inhabitants crowd its cobbled zonal streets, which circuit and sprawl around the sides of the bowl-shaped valley upon which it is built. La Paz is notorious for pickpockets; be careful to avoid losing your wallet.

There are hordes of backpacker hostels and hotels to suit every budget and taste around the tourist area of Sagarnaga, LLampu and Murillo in central La Paz. Check out a few hostels in La Paz before making a choice, as they vary widely in price and quality. It is also possible to bargain down, especially during midweek or if you're intending to stay a few days. If you have a specific hostel in mind, it is worth booking ahead to ensure you get a room, as the most popular hostels are often booked out, especially during La Paz´s frequent festivals. Many of the hostels include a substantial breakfast worthy of considering when making your choice.

The temperature reflects the high altitude; although on sunny afternoons it can reach the mid-teens Celsius, the nights often drop below freezing. Be sure to grab an alpaca jumper at the craft shops splashing through the tourist streets, alleyways, and marketplaces in an endless sprawling maze. Besides the craft shops, there are plenty of museums covering everything from South American musical instruments, ancient gold and silver artifacts, and coca production (Calle Linares). These are clustered around Calle Jaen and Plaza Murillo, all within the tourist zone.

For bars, pick up some of the flyers dotted around hostels and eateries. For a cultural experience, head to one of the illusive Penas to check out some traditional Andean folk music and sink some beers with the locals.

La Paz is a great base for countless activities such as the World's Most Dangerous Bike Ride to Coroico (you can book from any number of agencies on Sagarnaga -- it is worth paying extra for good, safe gear). Alternatively, hiking, skiing, nature walks, and Amazon boat trips can all be organised from La Paz.

There are plenty of frequently asked questions about hostels in La Paz. We've collected the most common questions and doubts when it comes to picking your preferred accommodation in La Paz. The more you know, the better you can plan with confidence and ease, right?

How to find hostels in La Paz?

Hostelz.com shows all 27 Hostels in La Paz. Simply filter by neighborhood and price to find your perfect budget place to stay.

What are the coolest hostels in La Paz for female solo travellers?

What is the best way to find cheap accommodation in La Paz?

Hostelz.com compares prices for 27 hostels in La Paz, Bolivia. We list for you other cheap places to stay in La Paz such as

This makes this very website the best place to find cheap accommodation in La Paz.

What are the best party hostels in La Paz?

The Rooftop Bolivia is the best rated hostel for partying in La Paz.
It offers: Bar, Nightclub.

Travel Tips for La Paz - from the Community

Oh man, so far no one from the community has left a comment or travel tips for La Paz. How about you kick start the discussion here? Gather your best backpacking recommendations for La Paz and jot them down below. The community thanks you.

Hostel? Check! Now let's have at your hostel packing list for La Paz and Bolivia.