This section is dedicated to take away all your "I wish someone had told me that before I went!" experiences. This way, you are better prepared for what to expect, what not to expect and can spend less time settling in, and more time making new friends in your chosen hostel. We share our insider knowledge of tips, tricks and important things to look out for in Stradbroke Island. To help you make friends with Stradbroke Island before you visit, we've included a few helpful and fun things you should know about the area. Enjoy! 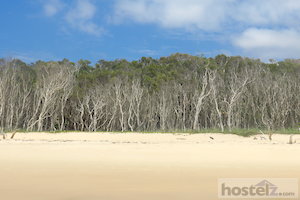 Less than an hour from downtown Brisbane, Stradbroke Island is a world away from the noise and chaos of city life. The second-largest sand island in the world, it’s situated in Moreton Bay, just off the coast of southern Queensland and enjoys a warm sub-tropical climate. For travel-weary backpackers looking for a hostel to chill out, Stradbroke Island is the perfect place to connect with nature and linger for a few days, or more, savouring all the best of island living.

Although Stradbroke Island was originally a single mass of land, after a wild storm in the late nineteenth century, the island was cut in two, separated by what is now called Jumpinpin Channel. What attracts most visitors to both North and South Stradbroke Islands is the pristine natural environment, and its sense of tranquillity. North Stradbroke Island is renowned for its many freshwater lakes, beautiful beaches, and wetlands. Although the island has three townships, almost half its area is protected by the Naree Budjong Djara National Park, while the waters off its coast come under the jurisdiction of the Moreton Bay Marine Park.

With such a rich natural heritage, there is much that backpackers can see, do, and learn on Stradbroke Island. To learn about the lifestyle and culture of the island’s traditional Indigenous landowners, an escorted tour is highly recommended. Apart from hearing the ancient stories, you also learn about the traditional bush tucker and bush medicine that are found on the island.

There are several good walking trails on North Stradbroke Island, and these are a great way to explore its unique landscape and see the native flora and fauna. Exploring the coastline is also very rewarding, and if you’re fortunate you may spot dolphins or even whales frolicking in the waters surrounding the island. Point Lookout on the northeast coast is often considered the best vantage point for whale watching.

If you’re a thrill-seeker there’s also plenty to entertain you on North Stradbroke Island. Apart from the above-mentioned swimming, hiking, and beachcombing, other fun things to do include surfing, snorkeling, scuba diving, and sand-boarding. The small towns on the island are also worth exploring, or you might enjoy taking a ferry to check out some of the other neighbouring islands. For further information, the friendly staff at your Stradbroke Island hostel can help you, while many accommodation places hire out equipment such as surfboards, snorkels, and bikes.

How to find hostels in Stradbroke Island?

There is exactly 1 Hostel in Stradbroke Island, Australia. Hostelz.com compares the prices for this hostel so you can get the best price on any major booking site.

What is the best way to find cheap accommodation in Stradbroke Island?

This makes this very website the best place to find cheap accommodation in Stradbroke Island.

Travel Tips for Stradbroke Island - from the Community

Hey fam! Here are a few more tips from the community, from them to you, and you to them. This space is dedicated for travellers to share their best tips on backpacking Stradbroke Island. Have a closer look - the Hostelz community share real hidden gems, insider knowledge and overall impressions of Stradbroke Island. Everyone is welcome to add something useful, funny, unexpected and the "absolutely necessary to know before you go" - share, share and then share a little more!

Excellent place to chill out, have a bonfire on the beach, and smoke some good weed.

Hostel? Check! Now let's have at your hostel packing list for Stradbroke Island and Australia.