18 hostels available. Prices start from $11 for a dorm bed.
We compare all hostel prices in Salta for you. So you save money and time!

This section is dedicated to take away all your "I wish someone had told me that before I went!" experiences. This way, you can spend less time settling in, and more time making new friends in your chosen hostel. We share our insider knowledge of tips, tricks and important things to look out for in Salta. 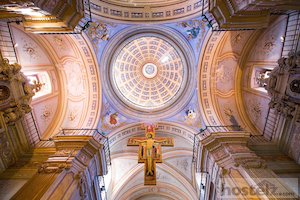 The city of Salta, Argentina, also known as Salta La Linda (Salta the Beautiful), is known to be a locals' favorite in Argentina. Located in northwestern Argentina, around four hundred kilometers to the Bolivian border to the north and two hundred fifty kilometers to the Chilean border to the west, Salta is a popular stopover along the Gringo Trail through South America. When staying at hostels in Salta, Argentina, you'll meet a fun mix of foreign travelers as well as plenty of local Argentinians, many of them Porteños, heading from Buenos Aires to spend a long weekend in Salta to explore the region.

Housing a popular university of twenty thousand students, Salta is a lively and colorful town that is sure to impress. A dramatic blend of different architectural styles from around the world line the low-lying streets, offering outstanding views on nearly every city block. Salta also offers many attractions in town, including the Museum Arqueología de Alta Montaña (MAAM) that is home to three mummified children who are said to be the most well-preserved mummies on the planet. You can also take a free walking tour from the center of Plaza 9 de Julio to learn the ins and outs of Salta's fascinating history. There is also a lively daily market at Mercado San Miguel, where you can buy cheap fruits and vegetables as well as local eats at the upstairs food court. Just be prepared to be bombarded with offers for cheap milanesa (a breaded chicken dish) and muzzas (a pizza dish). Don't be afraid to say "No, gracias," and do your own looking around for the best spot.

A bright nightlife scene (naturally commencing post-midnight and never ending before 5 a.m.) is prominent in Salta. Head to Balcarce Street anytime after midnight for a thrilling opportunity to see plenty of live music; dance your face off in clubs; and sip Salta's own Cerveza Negra while chowing down on those famous Santeña empanadas, said to be the best in all of Argentina.

If you're interested in getting a good view of the city, you can take to the sky on the Teleférico, Salta's own gondola that takes you three hundred fifty meters up to the peak of San Bernardo park. You also have the option to scale the more than a thousand steps up to the top, which offers a great workout for visitors and locals alike. If you head up for sunset on a clear day, you are guaranteed panoramic vistas of the town and surrounding landscapes, joining the many others at the top of the Cerro that had a similar plan. Allow at least forty-five minutes before the sunset if walking and fifteen minutes for the gondola.

Salta is also a great base camp for travelers looking to further explore the region of northwest Argentina, offering many day tours to popular towns such as Humahuaca (home of the mountain of fourteen colors, Hornacal), Pumamarca (Cerro de los Siete Colores), Cafayate (stunning wine-country and home of some of the most beautiful driving in Argentina along the Quebrada de las Conchas), museum-filled Cachi, or the grand salt flats of Salinas Grandes. Tours leave daily and there are many rental car options in town, as well.

We've collected the most common questions for hostels in Salta. The more you know, the better you can plan with confidence and ease, right?

This makes Hostelz.com the best place to find cheap accommodation in Salta.

What are the best party hostels in Salta?
COYA HOSTEL is the best hostel for partying in Salta.

Above we list every single hostel there is in the city. Let us take a broader look at what you can expect - and what not. We created this cheatsheet for you to get a more complete picture of the hostel quality in Salta, average prices and types of hostels to choose from.
18 Total number of hostels
$23 Average dorm price
$59 Average private room price
$10 Cheapest hostel in Salta
El Chabot Hostel is the cheapest
5 Party hostels in Salta
COYA HOSTEL is the best rated
Most Salta hostels are located in
City Centre
7.6 Average rating of all hostels

Travel Tips for Salta - from the Community

Travel Tips for Salta - from the Community

Hey fam! Here are a few more tips from the community, from them to you, and you to them. This space is dedicated for travellers to share their best tips on backpacking Salta. Have a closer look - the Hostelz community share real hidden gems, insider knowledge and overall impressions of Salta. Everyone is welcome to add something useful, funny, unexpected and the "absolutely necessary to know before you go" - share, share and then share a little more!