Westcliff
7.9
7 Reviews
Westcliff
Cheapest Hostel in Hermanus
We compare all hostel prices in Hermanus for you. So you save money and time!

Hermanus Backpackers is listed at the following booking sites:

It is the only way to book Hermanus Backpackers

How is Hermanus Backpackers rated on booking websites?

The Most Awesome Backpackers in South Africa!

This is an awesome backpackers! They have a fantastic Great White Shark cage diving deal too. You get either a free dorm night or R100 per person discount on accommodation if you book your shark dive through them.

The Great White Shark cage diving deal at Hermanus Backpackers was excellent. It was only R995 per person with a very reputable company and you get either a free nights accommodation in a dorm included or R100 per person off the cost of private rooms. The bar and the new cafe was great too. Staff was so friendly, the pets cool, good security and close to town! This is one of the best backpackers hotels I've stayed at.

Hermanus Backpackers hostel is very popular and is the closest to the sea out of the three hostels in Hermanus.

It is in a quiet residential area, overlooking a green at the front, and is less than five minutes' walk to the sea cliffs and a ten minutes' walk into the town. There is unsecured parking at the front but this is a safe town. It is difficult to get to Hermanus by public transport with no coaches or trains going here, only mini bus taxis, so it is easiest to get here by self-drive or Baz Bus (which stops in a town half an hour's drive away which the hostel picks up and drops off at for a fee).

There are several dorms, mostly with bunks plus a single for seven sharing. The dorm is locked and each guest has a key for their room. There are plenty of showers. Upstairs there is a shower with a WC, and also a unisex shower room with two showers, a WC and two sinks. The shower cubicles are large enough to change in. They are slightly tired but clean with plenty of hot water. These serve two dorms, and then there is another shower room at the other end of the building for two more dorms. There is an almost identical layout downstairs in terms of a shower and WC, and a shower room with two showers and a WC and sinks. There is also a WC and sink by reception.

Off the locked front door is a large reception area which is also used as a travel centre, booking many activities in the area and further afield, and a foreign exchange - a fantastic benefit which saves going to a bank in town (although best to exchange money in the morning as it is likely to run out in the afternoon). Off here is a reading lounge with book exchange and internet connection (this is rather expensive especially considering that there is one of the cheapest internet cafes in the country in the town). Next to this is a large open plan lounge with sofas, an open fire and TV with videos and DVDs regularly being played. At the back is are two dinng tables and a large kitchen with two wings. There is dinner served nightly here. From here are doors to the outside, which has a patio with picnic tables, a very clean swimming pool, and a grassy area with seating, all overlooked by mountains. There is outside access to the bar which has a pool table and seating.

The hostel is busy and sociable with a great vibe. The people there are very helpful, there are lots of activities to do, and the forex facility is a huge bonus. A fantastic place to stay in a really picturesque seaside town. 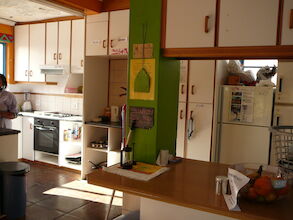 Hermanus is a very nice place as it is pretty and safe. The hostel is within walking distance of the shops and restaurants -- and it is safe to walk here for a change. The rooms of the hostels are nice, clean, and individual and face the pool area. Breakfast is included and a whole lot of activities can be booked with the hostel. The staff is very friendly and helpful.

The staff are extremely friendly. This is the place where I discovered and tasted the MEALIE MEAL most South Africans have several times a day. Great!

I had a great time here due to the fantastic staff. They are really friendly and make you feel welcome. They did a great shark dive trip from here and I got a discount on the room. Large room with ensuite, reasonably priced. The atmosphere is what really makes this place stand out (along with Bouffy, the HUGE but friendly dog) and it is one of my fondest memories of our 6 month trip.

You guys ROCK!!! What a great place to stay!

This is a very popular backpackers with a nice relaxed atmosphere and a bar filled with interesting characters. The staff were helpful when it came to suggesting activities, and the presence of a security guard made me feel far more comfortable about leaving my car parked outside over night.

I was travelling with friends who were out on their honeymoon. They were very impressed with their double room by the pool, which featured plenty of space, tasteful decor and a comfortable bed. I took a dorm bed, which was comfortable enough but unfortunately stank of stale cigarette smoke. Can't win them all, I suppose...

Hermanus Backpackers Reviews from the Web

The owners were so friendly and really helpful in booking a whale watch for us, then also canceling it when we realized we wouldn't have enough time in the morning to get to the game reserve we were staying at the next day. We joined in the braai dinner and the steak was delicious! Met a ton of great people and played pool, chatted by the outdoor fire with wine in hand :). The music was buying but quieted down around 1pm. Highly recommend staying here if you are shark diving, whale watching or just passing through town.

nice environment,good service ,if come again ,i will choose it again

Super helpful staff made organising things to do very easy and really went out of their way to make things run smoothly. Their dog Jock is a great character.

Good kitchen, fireplace, bar until ten or so.

Great deal on a room when you book a shark dive. Rooms were clean and staff was friendly.

Really liked the bar, free pool table and the swimming pool. Hostel only 10 min walk from centre of Hermanus.

I liked the staff very much, they were nice and the atmosphere was also very good. We meet a lot of nice people over there.

We had such an awesome time at Hermanus Backpackers! The rooms were really spacious and the colors were so lively. Nico - one of the staff was the MAN! He gave us great recos and was a real cool dude.

We stayed in the smaller house. Perfect if you want a quieter stay (which we did). Very clean, and very helpful staff, thanks.

secure and close to town. easy to walk to town

A good backpack, quite clean and comfortable. Very friendly staff and relax atmosphere. Perfect for surfers ;-)

the location nreaf the sea

Hermanus Backpackers is considered one of the best hostels in Southern Africa. It is a clean, well run, vibey place with friendly, clued up staff and has all the facilities you could possibly need. We're very close to town and the ocean. Off street parking, security guard & security gates. Hermanus Backpackers is well known as THE place to book your Great White Shark cage diving trip, R795 per person and get a free night's accommodation in a dorm or R80 off the cost of a private room. All types of room available, from dorms to private triples, doubles, twins and doubles, en-suite. Free breakfast included. We are also kid friendly, we have perfect rooms for parents travelling with children. A sun trap back garden courtyard, swimming pool, bar and free pool table makes for lovely lounging and relaxing! Braai available every evening for R60, you sit around drinking beer, we do all the work! Free book exchange, cheap internet, cosy fireplaces, chill-out lounge and DSTV lounge - a place for everyone to find a corner!

Close to town centre and the ocean. One block behind No. 8 Main Road, we are wedged between the Main Road (R43) and the ocean. You can contact us if you'd like a map emailed to you.

Hermanus Backpackers is listed on the following booking sites:

hermanusbackpackers.co.za/
Phone Number: +27 28 312 4293
To add or correct information for this listing, please use the Listing Correction Form.

See all 3 hostels in Hermanus

See all 3 hostels in Hermanus