8.8
2,116 Reviews
Top Location
We compare all hostel prices in Kilkenny for you. So you save money and time!

Kilkenny Tourist Hostel is listed at the following booking sites:

How is Kilkenny Tourist Hostel rated on booking websites?

All a hostel should be

Great place, with a ridiculously helpful and nice staff. Thanks to Brendan and awesome eye-patch girl. Rooms are generally extremely clean, as are bathrooms. The rest is a bit less so, cobwebs in windows and stuff. Kitchen is good, could be bigger, but it works. Fix the dripping faucets, guys, you're wasting a ton of water! Rooms are good, with matching linens and all, so it's pretty nice. Dorm we saw was an 8 bed, and kind of crowded with no tables or anything, just a couple of tiny chairs. Still, the location is awesome, right next to some of the biggest attractions in town.

The staff were miserable and very unhelpful. Wash facilities needed cleaning and fixing. On a weekend other guests were coming back early in the morning and carrying on (singing and talking) till the morning thus rendering sleep impossible. Good location though in the centre of town but not easy to get parking spot if in car. Wi-Fi connection poor. Worst we visited in Ireland.

I cant understand how this hostel has got higher ratings than 1. The staff are so ignorant and cannot converse with you. We had a horrible room that stunk of paint and one of the staff barged in with 4 fellas at 12 (it was a female room) and said that we had to close the window; we were going to have extra people and we were not allowed alcohol (she saw a can in the bin) even though none of this was specified at reception when we first checked in. Having worked at a hostel previously, I would not recommend this hostel in any way -- it is a definite waste of money!

Alright, could be cleaner

This hostel has a great location right in the center of town and a lot of stuff going for it -- the lounge room with the fireplace is absolutely gorgeous, the kitchen is small but ok, the dining area is also fairly small but shows off the beautiful Georgian architecture. The rooms are pretty dingy and crowded, and while the shower room was clean, some of the toilets were pretty dirty with trash overflowing from the garbage cans. The sheets were also threadbare with lots of holes, the beds creaky, and the mattresses pretty worn out. Also it is next to a club popular with what seemed like mostly teens, so it can get a bit loud on the weekends.

Kilkenny isn't a large town to start with, and the hostel has an excellent location just a few blocks from the center of town. From the intersection of Rose Inn Street, the Parade, Patrick Street, and High Street, just west of the bridge in the center of town, head north on High Street about five blocks or so and it turns into Parliament Street. The hostel is on the right. If you come to a "T" intersection with Dean Street and Vicar Street, double back about a block.

The hostel reception is open until 11 p.m. If for some reason your arrival will be even later than that, they are flexible and will make an effort to accommodate your situation. The kitchen, common rooms, bedrooms, and bathrooms are all OK, but the one downside is that the kitchen and common rooms are locked up from 11 p.m. until morning. If you're a fan of hitting the road early, perhaps bicycle touring or the like, you may want to reconsider storing your food in the kitchen the night before you depart. There is also no breakfast served at the hostel.

Kilkenny has a well-earned reputation for per capita partying, and the hostel is certainly no exception. Odds are you will have to deal with at least one fellow guest who's either had too much or is dealing with the after-effects. There are exceptions to every rule, of course, and more philosophical students can be found visiting the hostel, too.

For the opportunity to visit a great party town with a lot of history as well, the Kilkenny Tourist Hostel is a decent overall value for the budget-minded traveler. If you're coming from Dublin, hostel rates in Kilkenny will seem like a steal! Otherwise they'll seem pretty normal compared to other parts of Ireland. 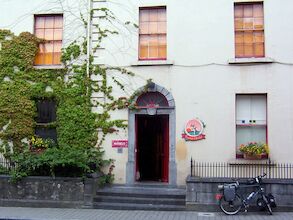 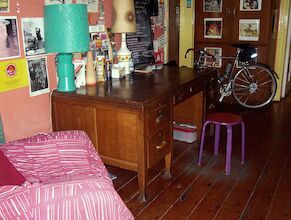 We stayed here for only one night, but I would stay again. The building is kind of old but that added character to it. Shower was warm although not too much water pressure. Security was good, you had to enter a code at the door to get in. There were not as much extras as other hostels in larger cities, but this was a very nice place and I would stay here again.

Atfer I stayed in this hostel I couldnt see what all the hype was about I found it to be a bad experience. The staff were on a different planet and werent interseted in anything we had to say The place was run down and dirty. I certainly would not recommend this place to fellow travellers.

Great hostel in an old building. Much cheaper than hostels in Dublin and Galway. Located at the centre of all attractions! Would be wonderful if they had power plugs on each bed and curtains but would definitely return!

Visited better hostels elsewhere. If you come, Ask not to get the room out to the street... Staff was friendly and welcoming.

Good location, friendly and helpful staff, great size for the room. Our room lock didn't work but there was such a friendly vibe that I wasn't too stressed. Sink in room was a bit clogged, some pots in the kitchen were on their last legs. Wifi was weaker up in the room but still reached. On the whole, a good stay, thanks team.

A nice hostel right in the center of Kilkenny. The staff were lovely and the beds were clean. Would recommend!

I liked the casual atmosphere at this place and the facility to make complimentary hot drinks in the kitchen and sit in the dining room, but I found the usual rules of consideration for other guests to be absent when males returning to the room next to mine - top floor room 9 was mine, theirs was 8 - at just before 3am made terrific noise allowing bedroom door, which is a fire door, to slam shut by itself multiple times as they went back and forth to bathroom. Ruined my sleep after 12-hr journey

gorgeous hostel, staff are really friendly and the atmosphere is fab. kitchens really good as well

This hostile has great location. The rooms werent anything special, but I slept well and felt clean. The showers were okay The people were very friendly!

Super nice hostel in a cute town. :) would stay there again.

Door did not shut fully to room, therefore not locked so that kind of worried me. I locked my bags but still, never know. Washrooms were ok, girl at reception was really nice. Good location.

Oh how I love the smaller hostels that feel like home!!!!!!! Not the super business conglomerates in the big cities!!!!! This hostel was my favorite in Europe so far! Not only was Kilkenny my favorite in all of Ireland, this hostel was amazing!!!! SUPER friendly staff! I would have stayed longer but it was completely booked. 10/10 hostel! Rooms were HUGE. WIFI in the rooms. Kitchen with free coffee with milk free all day. Clearly labeled free things in kitchen. Location in the heart of the city, 15 min walk

the 6 bed dorm i stayed in was quite spacious. the hostel is opposite a bar which can slightly loud at night so just bring ear plugs. the kitchen is really well equipped and very easy to use. the hostel is in a really central location with easy access to the main things to see. there isnt really an atmosphere, quite a lot of families that stayed but that could have been because it was school holidays - this may not be the case otherwise

Kilkenny is now one of my favourite cities to visit in Ireland, and thats partly due to this very well run hostel. The staff is very friendly and helpful. Shower was better than the one I have at home. If there was one thing I would like to see changed, its the lack of privacy, a blackout bed curtain would be very nice.

Location is great and overall everything is great, even for an old building. Staff is nice, always someone in there 24h.

But the dorms are tiny and not convenient. There is a real proximity with others peoples as there is just a few space between beds...

This hostel is suitable for all types of tourists, of all ages.

The location is very good: close to the castle, cathedrals, museums, supermarkets, pubs, restaurants. The bus station is in front of the hostel KK1, KK2.

The staff is really helpful and mature to understand and fulfill the client's needs.

There are lockers on the hallway, hand sanitizer at every 20 m.

The cleanliness deserve a 10.

Good atmosphere for everyone: a quiet sitting room and a conversation and party room

One of the best hostels to be found anywhere, brilliantly run, and epitomising the pleasure and value of travelling and encountering new people, experiences and ideas. A fine, spacious townhouse with a modern, stylish, charming interior, and a relaxed, friendly athmosphere, right in the heart of a beautiful, vibrant, historic city.

Just decent enough. And another hostel that does not offer breakfast.

One of my favorite hostels Ive stayed at. The rooms are adorable and it is super super clean. The staff was so nice and the kitchen amenities are a huge plus. Very centrally located. Stay here!! :)

We loved it! The location was perfect, many restaurants and pubs around. The staff was very friendly. Our room was nice and warm. Definitely I recommend this place!

Cute hostel, super friendly staff and comfortable beds. Kilkenny Castle is right down the street as well as many Cafe's and shops.

Ours is a family-run, medium-sized hostel, located right in the center of downtown Kilkenny.

The hostel is in a beautiful 260 year-old Georgian townhouse with most of the original features still intact.

The atmosphere is cosy, mellow and relaxed. You will get a warm welcome at what is generally regarded as the best budget accommodation in the city.

We have a kitchen where you can cook and a sitting room.

The hostel aims to to provide clean, low-cost and friendly accommodation for visitors to Kilkenny

It is the only hostel in the city that is approved by the official Irish Tourist Board and it is a member of the most important group of independent hostels- the Independent Holiday Hostels.

Just 100m from the main street which is called High Street.

Kilkenny Tourist Hostel is listed on the following booking sites:

kilkennyhostel.ie
Phone Number: (056) 7763541
To add or correct information for this listing, please use the Listing Correction Form.

See all 4 hostels in Kilkenny

See all 4 hostels in Kilkenny