How is Paddy's Palace Dublin rated on booking websites?

The hostel building we stayed in seemed a bit rundown. It also sounded like there was some sort of water pump constantly running in the room next to us. But, the beds were clean and had a basic breakfast included. Also in a convenient location next to the busaras bus station.

Paddys place is very very far from beeing a Palace. Few toilets and showers for many people. No electic sockets in the sleeping roooms so no way to charge safely electronic devices ... the sockets are all based in the central room, nude without a single chair. This room is also used by young adults, coming back from the pubs to exchange experiences and music from 0 to 6 AM. So if you can manage to sleep despite the traffic jam noise from outside (there's no double glazed windows) no way to rest for long ... Only if you have really nowhere else to go.

Cold showers and unhelpful (if rude) night staff. Otherwise, rooms, bed linen and breakfast were ok. Be careful with their schedules. They didn't let us check in 20 min earlier and when we tried to stay in the lounge until the first airport shuttle (staying for 3h until 5am) they told us we would have to be in the cold outside instead. Hard to recommend given the rudeness. I should add that the official photos are quite old and clean.

Paddy's Palace certainly sounds like the perfect Irish hostel -- 100% Irish owned, cute yet classy name, and a trumped up transportation service that can take some stress out of travel. But don't be fooled.

This hostel claims that by taking their airport shuttle you save money. This is ridiculous. Perhaps there are buses that cost that much, but directly outside of the Dublin airport is a bus station where you can take a public bus (only a couple euro) that stops minutes from Paddy's Palace. And, when you're ready to head off to your next adventure, you have several stops along Gardiner Street where you can grab a bus back. That said, the hostel is centrally located, easy to find, and in a safe area. However, so are all the other hostels that are on the street. Dublin isn't a large city, chances are nothing will be more than a fifteen-minute walk from where you decide to stay.

The rooms are nothing special -- a bunch of bunk beds placed close together in a small room. The rooms seem decently clean, but we found left over wrappers and other objects in our "clean" bed. There is a required key fee (returned at the end of your stay if you return the key) and a charge for paying with a credit card. The rooms lack storage space -- making tricky business of storage, dressing for a night on the town, or trying to quietly pack while your roommates are sleeping. Security, however, seems sufficient, as room doors lock automatically behind you (don't forget your key!). Overbooking does occur. During our stay, two travelers with reservations arrived late at night and were met with no beds and unsympathetic staff. Also, Paddy's Palace claims on their website that all rooms come with an attached bathroom. This is not accurate, as the room we stayed in had bathrooms down the hallway instead. The bathroom had one shower (limited hook space, your clothes will probably get wet), two stalls, and a double sink with counter space.

The lobby area could be the redeeming feature of the hostel, but is ruined by the fact they shut it down at midnight. When the clock strikes twelve, social time (or internet time) is over and the staff lock the lobby. The building is divided into sections with separate entrances, so if you're staying in a separate section you're told to leave and if you're staying in the same area of the lobby you're sent to your room (childhood style). During the day, however, the area is lovely. Since the building is located on a corner, the large windows let in sunlight and give a good view. There is free wireless internet, but it costs to use the lobby computer. The lobby also has an area where you can buy soft drinks (overpriced), a large TV, several comfy couches, and a decent book exchange. There is also an option to book tours here (don't wait though, they sell out early). A large kitchen is down the hall and has a decent complimentary breakfast (toast, jam, cereal) but charges for use of utensils.

Though a hostel can sometime be an awesome destination in itself, typically all a traveler really requires is a decent place to fall asleep at night. Paddy's Palace meets this requirement. However, false advertising, rude staff (just one example -- we overhead a phone conversation between a staff member on duty two travelers who, due to a delayed flight, missed the last hostel shuttle. Instead of telling them alternative ways to get there, the staff member informed the travelers that "it isn't our responsibility" (and hung up). And rules that are not consistent with a traveling lifestyle keep the Palace from achieving its possible potential. 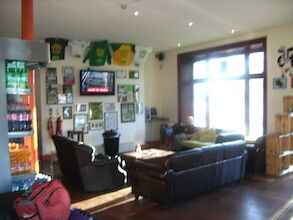 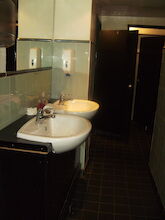 Poorly run hostel, cold showers, dirty linen left on the beds, and very unhelpful staff. I would not recommend Paddy's Palace to anyone!

Where to start? We went here when we were jetlagged right after an overnight flight. We booked a room for the night we flew over so we could get to our room right away in the morning instead of having to wait until three p.m. -- like I'm sure many people do -- and then the night after. They charged both nights to my creditcard when we didn't show up that night and then gave my room to someone else! So when we arrived they told us we paid for a room, but we couldn't have it! Luckily the people had left early. Then they told us to go the wrong way to get to the room so we went up four flights of stairs for nothing (it says

"reception" but that's where the rooms are?). And then that night, because they filled the paperwork out wrong, the night guy wouldn't let us in! Total idiots working there. The room was totally hot and faced a loud road where traffic starts at six a.m. Also there is a "secret" shower room no one bothers to tell you about and it has no sign on the door. On the plus side, this is closest to the bus station, but seriously, it's so poorly run, it's laughable.

The dorms are mixed and there is only one bathroom on each floor, but the place is clean. Breakfast is cereal, toast and tea. The staff are unhelpful, which is off-putting. I wouldn't stay here again, as compared to other hostels on the same street, it's a rip-off, as I found out when the staff lost my booking and I had to find a bed for the night.

It sucks having to share the bathroom with the whole floor, but that's forgivable. The hostel has a friendly staff and a pretty good location.

Paddy's Palace Dublin is listed on the following booking sites:

www.paddyspalace.com
Phone Number: +353 (1) 8230822
To add or correct information for this listing, please use the Listing Correction Form.

Open Dates: All Year except December 24-25

See all 20 hostels in Dublin

See all 20 hostels in Dublin