8.0
3 Reviews
We compare all hostel prices in Shanghai for you. So you save money and time!

But wait! There are more hostels in Shanghai...

HI - Shanghai - Le Tour Shanghai YH Hostel (not to be confused with the associated Shanghai Le Tour Traveller's) is a traditional-style hostel located close to metro stations. The initial impression is that it's rundown, but that's not really the case when you move inside. The dcor is YHA and homey with several connected common areas. It's strictly nonsmoking inside and there is good Wi-Fi throughout the building. As it's a bit further out of town than most hostels, it is often quieter and especially worth thinking of when other hostels are busy.

The hostel is located right under an elevated metro line -- so to some, it will feel noisy -- and about a five-minute walk from a metro stop. By the metro and on the corner of Bailin Lu, it is not difficult to find. It's certainly further from town than most hostels, but using the metro it's not too much of a problem. It is across the street from small food stalls and shops, small restaurants, and modern convenience stores. On the other side of the tracks is a massive modern shopping complex with stunning architecture (you are likely to be stunned one way or the other!), catering to an ever-growing Chinese upper class.

The dorms are spacious, and, like most of the hostel floors, are carpeted (and badly stained). Each dorm person is provided with an enormous-locking locker. The bunks are solid, as are the mattresses (this is China!) and each has a shelf and light, and there are several power points. All the rooms are air conditioned. The modern bathrooms are kept very clean and have both western WCs and squattie potties, while the showers are quite adequate.

There is a large, cosy common area with multiple sub-areas or alcoves, each with varying types of sofas and chairs or tables and chairs all with good Wi-Fi reception and minimal dropouts. The front common area, where quiet background music is played, contains a small bar with just a small range of drinks and slightly expensive food. In the larger common area, one section has free TV/DVD; in another there are three free, internet-connected PCs. Magazines (though they are mostly in Chinese), a book exchange, and hot water are useful extras. There's even a mini gym -- there's only three pieces of equipment but hopefully it's enough to keep the addicted at peace with themselves! There are plenty of flyers for other YHA hostels and useful maps and tourist info for Shanghai and the hinterland. Out via the small back patio is a small kitchen, with just microwaves (as good as it gets in Chinese hostels) and a fridge, and a laundry (though the dryer is expensive).

This is a good hostel, with quietly helpful staff. Unfortunately it's a bit far from the main tourist attractions, but is not too difficult to get to them. As the metro is just ten metres away -- that is ten metres sideways and ten metres above -- it can seem a bit noisy at first, but we found that we soon ignored the rattlers (anyway, they do do not run through the night). The hostel is a bit lacking in social atmosphere during the day but there is always lively chatting in the evenings. Le Tour does not have the problem of excess of long-term residents that affects many other Shanghai hostels. We don't consider this the best hostel in Shanghai, but it's most definitely not the worst. 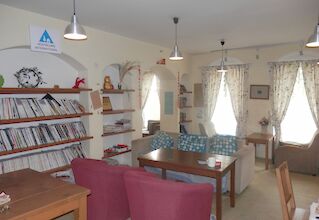 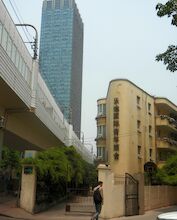 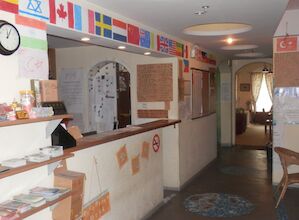 I received a warm welcome when entering the hotel. All the information was written on the walls of the entrance. The staff speaks English, this made it easy to communicate and ask for detailed information. The rooms were clean and basic, I received all the needs I expected for the paid price. The nice thing about this hotel is the fact that there are a lot of international visitors. As English speaking European I made some friends at this hotel. This was caused by the nice hotel lobby, visitors have the opportunity to share a drink and chat with each other at cheap prices. As a conclusion you can define this hotel as well priced, friendly, well equipped and at a pleasant distance from the city center.

HI - Shanghai - Le Tour Shanghai YH Hostel is located right near the metro station (in fact, it is almost underneath the metro line). It is in a somewhat more poor area of Shanghai (compared to the area around The Bund and around the Pearl Tower), however, within a five-minute walk of the hostel is an area with street food as well as McDonald's and convenience stores. The rooms are air conditioned and the beds are comfortable.

The hostel is located right under a metro line, and about a five-minute walk from a metro stop. It is across the street from some stall food and small restaurants, as well as a very large, inexpensive internet cafe. The hostel is easy for cab drivers to find if you give them the name of the subway station it is near, and of course is accessible by subway during the metro operating hours. The instructions provided by the hostel should be okay, but if in doubt have a map with you and ask a local at the exit of the subway which direction to walk.

It is not far, so don't be fooled into paying for a ride on a motorcycle. At the subway exit, as is the case everywhere in Shanghai, there are a number of motorcyclists offering a ride. There is no need to because the hostel is close enough. Walk along the metro line (which is above you), and without turning on any street, you will see the hostel from this road. Be careful though, as there can be a lot of high speed motorcyclists who will not slow down for pedestrians.

The rooms are spacious and provide a place for books as well as a light for each bed. All the rooms are air conditioned. The washrooms provide western-style sitting toilets, and they are reasonable clean. Each bed also has the option of a locker with a lock -- these are spacious and should hold most reasonably sized backpacks. The blanket and pillow provided are sufficient, and the mattress is reasonable thick and soft. the showers are located in communal bathrooms attached to the hallways. Each shower is in a stall.

There is a very cozy common area in this hostel. the hostel has free internet for short periods of time (and for longer internet sessions, an internet cafe right across the street is very inexpensive). The hostel offers a good selection of meals including a good all day breakfast. For much cheaper food, the food stalls all around this hostel offer Chinese food at very low prices. Very close is a place that sell baozi at very cheap prices. There is a DVD room as well as a number of couches and tables good for reading.

This is a good hostel. However, it is rather far from The Bund and the Pearl Tower, but is closer to other attractions in Shanghai. It may be cheaper than hostels closer to The Bund, but remember it may be a costly cab ride to get there if you plan on going there at night. Like most hostels in China, it provides a decent selection of western and Chinese food, albeit at much more expensive prices than the Chinese food you can buy around the hostel. 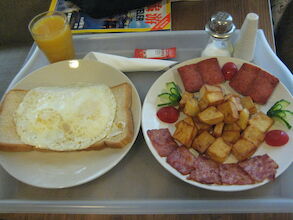 Hey. This is a great place! Friendly staff, very clean rooms, and a nice and cousy commenroom with dvd, sofas and a great atmosphere.

But wait! There are more hostels in Shanghai...