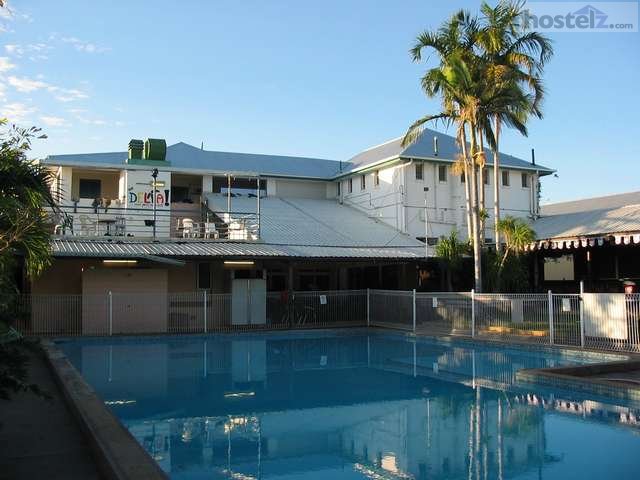 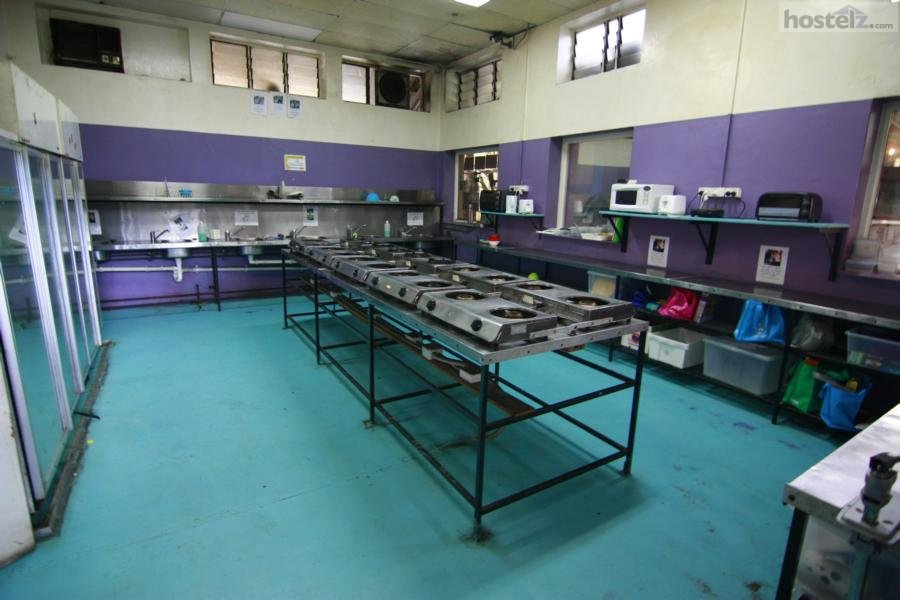 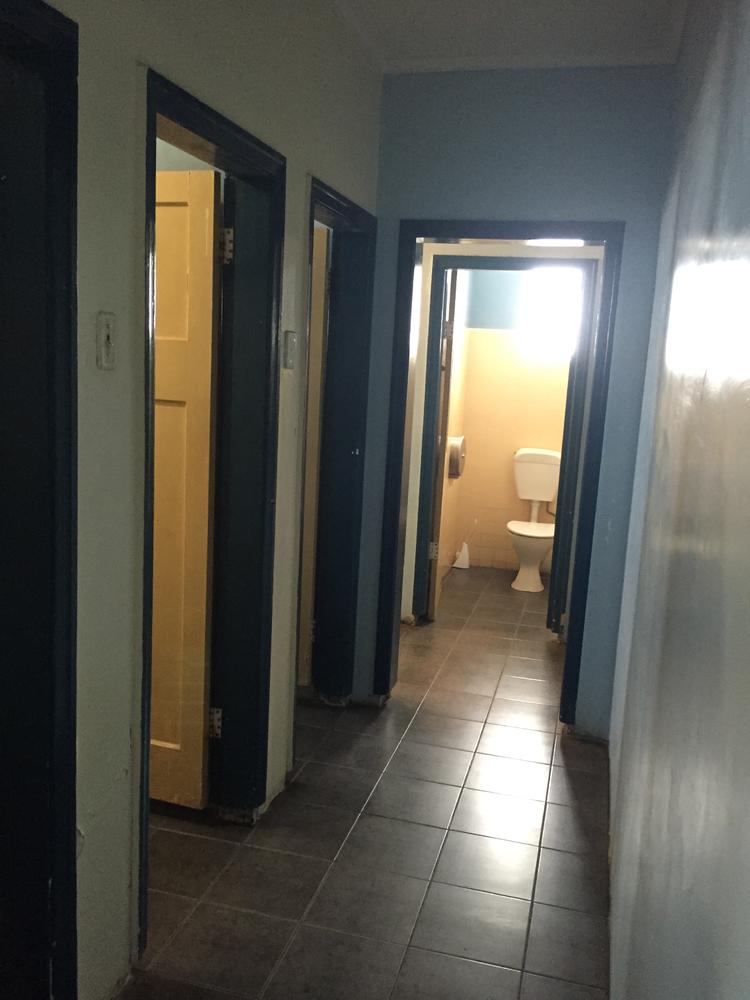 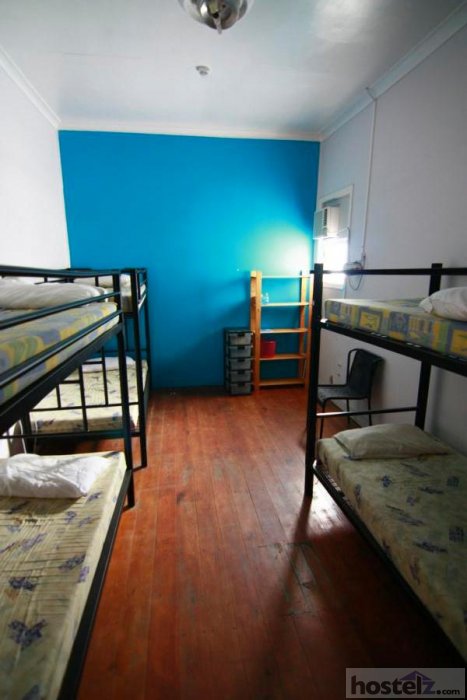 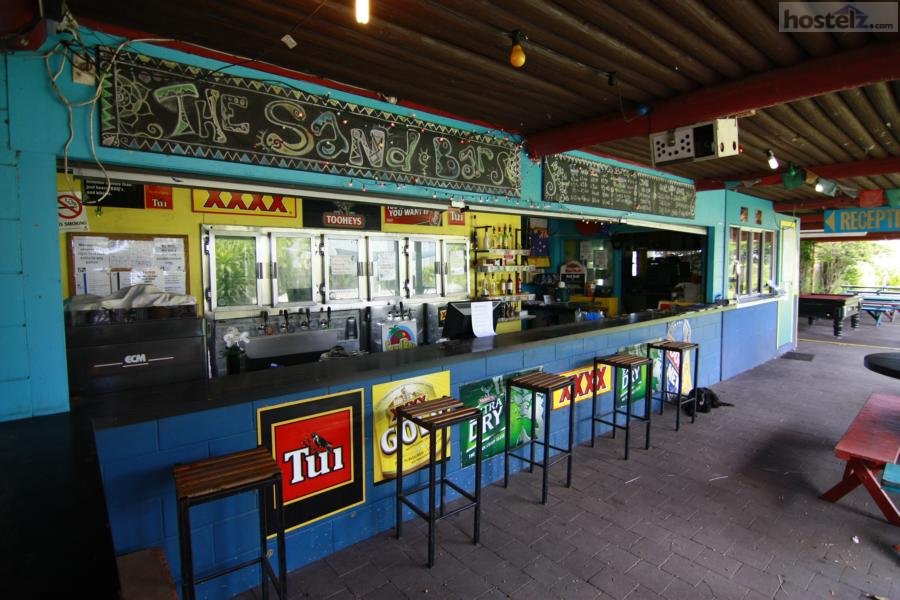 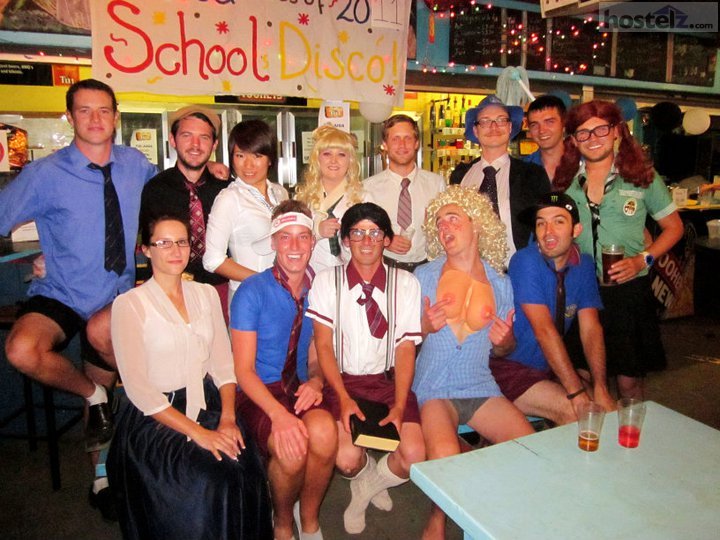 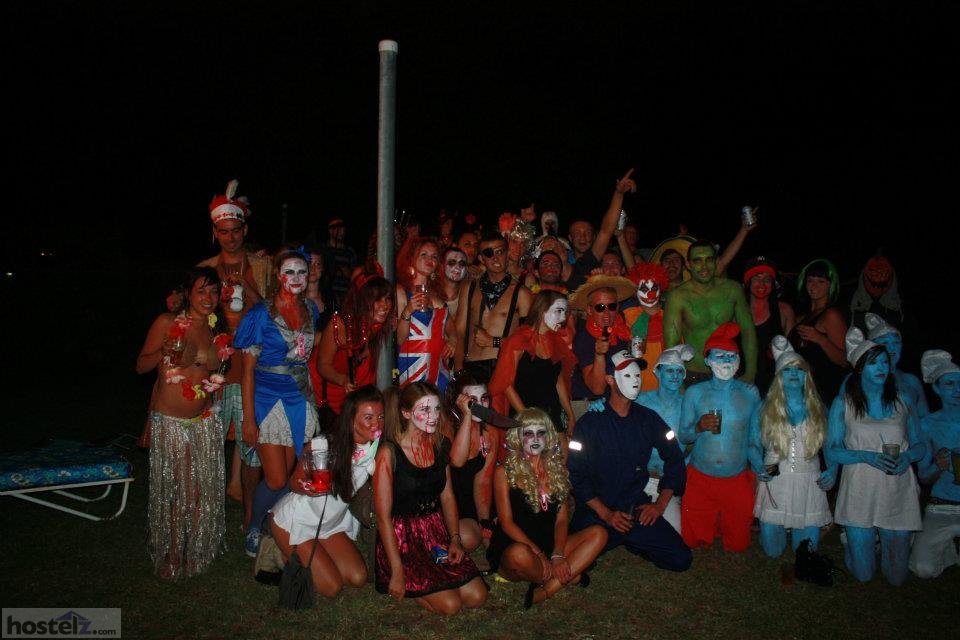 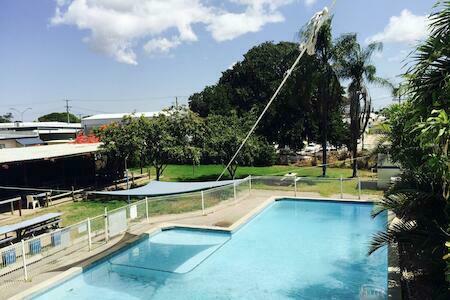 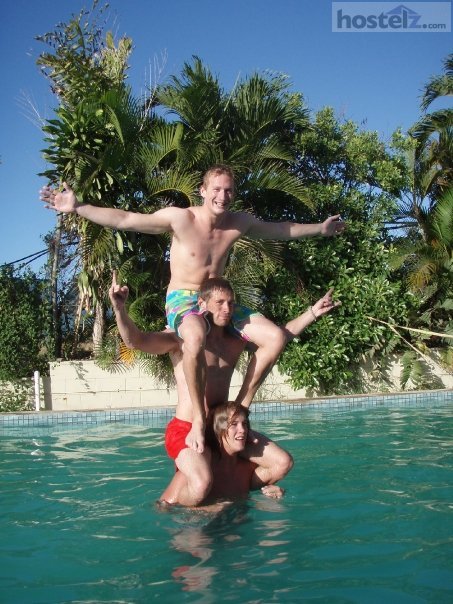 Delta Backpackers is listed on the following booking sites:

www.deltabackpackers.com
Phone Number: +61 (7) 4783-3991
To add or correct information for this listing, please use the Listing Correction Form.

It's a shithole but it serves its purpose!

Honestly could not have asked for a better place to do my farm work. Yes it is true that they will tell you its a 2 week waiting period but with farm work its so unpredictable that it is near enough impossible, in any area, not just here, to give an accurate estimation of when you will be working. Admittedly, the hostel is a bit of a dive and could really do with some renovation but at the end of the day you are working on a farm, the place is always going to be dirty because people come from work and have mud, shit and god knows what else everywhere. However, the facilities are big enough to accommodate for the 115 people even though it might not seem it on first impressions. Craig, the hostel owner is a legend. Show him respect and you'll get it back. He's hilarious and full of great stories and the reason that he thinks backpackers are dicks is because of the high horse backpackers come to Delta in. The work is bloody brutal, however generally the farmers are just looking for hard workers. So just push through the pain and get on with it and even though it may not feel it. I went in 2015 and went back in 2016 and yes it did go under new management which did, at first, cause a lot of confusion and mayhem. However, Ree the receptionist managed to put it all back together. That woman cares so much about the backpackers and obviously its going to take time learning the ropes but when I left Delta nearly every body in the hostel was working and if people weren't then she would continuously call farmers every day to see if people could even do a day here and there. Ree pretty much single-handedly runs the hostel and does a really good job now. I went back like 3 times during my stay in Australia and can honestly say that the people make the place what it is and I have made life long friends there and that includes the staff. I never got to say bye to Ree and Craig so when you read this Thanks for everything that you did for me! Although, lets be realistic I hope to find a way I can come back next year but only if you get some new cars for work!

I wouldn't give this place any stars -- I checked in and was planning on doing my farm work here, then got inside and seen how dirty and disgusting the place was. I stayed one night and had to leave! I don't think this place has been cleaned for months ... at least! cats in the kitchen cutlery, blue molded showers and sinks, floors and walls were black and filthy, and old food stuck to the plates they gave you. Honestly its the worst place i have ever seen, it's hard to describe how bad it is but a few people I was with said they would rather be in prison than stay here! prison would be much nicer. It's just grim and I don't know how it's legal to let people sleep here!

If you're up for meeting an amazing group of individuals, getting drunk whenever you feel like it, and simply doing absolutely nothing for the best part of your experience in Australia, go to Delta. I wouldn't class the hostel itself as a working hostel. Because they find work just as much as Craig smiles (Never). I was at the hostel for 11-12 weeks and was promised work after 2 weeks. That obviously didn't happen. This place is run on lies and false hope. Many people at the hostel were working. But only because they looked for the work themselves. Management really didn't do anything! The pool however, is beautiful and clean! Because that is the only the the owner Craig does and knows what to do. If you do end up staying here, I will warn you now. Don't mess with Kiley! Kiley worked in the hostel last year, but went Home for a while. She has recently come back to the hostel and although she has found a little bit more work, she has got to be the most power hungry individual I have ever met. Whilst I was at delta, one of the guys there was kicked out due to not being able to pay the rent. He did go through a job or two, but surely being a working hostel, they should have been able to find work suitable for him? Honestly, this woman has a stick shoved so far up her a** it's hitting her tonsils. When she got back from her holidays she held a meeting at the hostel to tell us all what was going to change. It's was like being at school. "If you do this, you get kicked out." "If you do that I'm fuming you $20." It felt like you could do nothing at the hostel because she'll be watching you. I won't lie to you, I have had the most amazing time here and met some amazing people. But if you want work, go to another hostel in Ayr. You will not find it here.

You are basically being fined for being there

I was told it was going to be around 2 weeks of waiting time for work. Fair enough, I thought. 9 weeks later I ended up picking fruit 3-4 days a week. The worklist is an absolute joke, unless you have some friends that are already working on a farm you are basically without chance. Many people are coming back from previous year and take their old jobs back straight away and requests to work with their friends. You have the best chance to getting work if youre female and are from the UK, tho many farmers prefer them. After being there for 2 months, they cleaned my room for the first time. (Which was mostly scrubbing the floor with a dirty mop). Regarding the kitchen, even tho it is big with many stoves, the poor amount of frying pans/pots makes it hard to cook anything. The dishwasher soap bottles are ALWAYS empty every evening, which made all the equipment dirty. Watch out for it, cause the receptionist will try to fine for not doing your dishes properly without the dish soap. I can go on all week with negatives about this place, but will end my review with these 'hilarious' things. In the beginning of may when the hostel bar opened for the season, they had a costume party and did write on the big black board that the best costume would win a trip to Magnetic Island. Did anyone win it? No, they never mentioned a word about later on. That tells a bit about their mentality i believe. The bar itself is by the way over priced compared to the local pubs, and youre not allowed to bring your own alcohol inside. On the positive side I can mention that they have a good location on the main street in Ayr. Will leave it as soon as possible!

I stayed there last week, it was awful! So dirty! A cat was in my bed, kitchen and bathrooms are so dilapidated and dirty as well. Some guys were waiting about 4 weeks for work. The "working list" makes no sense because your position changes everyday but not just in a better one. The kitchen equipment is so bad and less. I didn't feel well there. The rooms are so dark. I can't recommend it!

I actually loved my time at delta, but sadly it had absolutely nothing to do with how the place was run. I arrived early April after being told over the phone work was expected to start in a week or two. By the time I left I had been there for 7 weeks and hadn't got a single days work through the hostel. The hostel operates on a work list but there were so many exceptions to the rules listed it's purpose was nearly defunct. Besides the work list fiasco, the facilities were ok. I stayed in a 3 bed dorm which was pretty cosy for space but the aircon and fan worked fine so there's nothing really to complain about on that front. The hostel houses about 100 or so people, and to my knowledge there is only 3 showers upstairs and 3 downstairs (I assume the same for female) which is ok but they can get really busy during peak times. The kitchen is reasonably well fitted, lots of gas stoves so there's usually room to cook even in peak hours but there's not really enough saucepans/frying pans to go round. Each resident is given a pantry box upon check in containing a plate/bowl/cutlery but this ends up getting passed around so cutlery ends up being a bit of a free for all. My only real negatives come from the current manager. Multiple times we heard him badmouth backpackers and make snide comments about guests, which sort of begs the question; if you don't like backpackers, why on earth would you run a backpackers hostel? He was barely ever actually on premises and it appeared that he put a lot of stress on the receptionist to do practically everything. When I first arrived we had to wait for the receptionist to get back from her lunch break because he didn't even know how to check someone in. This hostel could be great and I'm sure it once was, because when I arrived the place had a really high rating and it's a shame to see bad management dragging the place down. I would say overall my stay wasn't worth the $155pw I was paying for my room. It may have been if they actually provided the service of helping their guests find work, but just for accommodation it's far too much money.

Where do I start, the manager of the hostel is awful, he's makes you feel like he doesn't want you there, just wants your money! He's never around so any question I had to ask about work he wasn't there to answer them! The electric went off in my room for over 20 hours in the first week of staying there and he wasn't anywhere to be seen so I had to get ready in a dark room! I was told i'll have work in a week and after 4 weeks of waiting I gave up! The hostel has such a good vibe and everyone I've spoken to In there has been recommended it from past users, but this year I feel like it's getting run into the ground! If you want to make friends then here is the place to be (as everyone is sat around all day) but if you want work i'd definitely go elsewhere!

How is Delta Backpackers rated on booking websites?