Kiwipaka Waitomo is listed at the following booking sites:

It is the only way to book Kiwipaka Waitomo

How is Kiwipaka Waitomo rated on booking websites?

Really clean, and nice rooms, we were amazed at the room that we got. we got there late and we had to pick up our key at the bar, which was really nice of them, and they were really nice people!! good place to stay!!

Right behind the information centre, this is a great place to stay. Clean rooms, bar and a cafe/restaurant that makes great pizza!

Staff were friendly and helpful. During my stay, it was either dead quiet, or full of groups that were there for one night. Rooms were warm and clean ... This is a really quiet area, so don't expect a party atmosphere (perfect for what I was looking for).

Kiwipaka Waitomo is located on the bus route of Kiwi Experience -- we don't have to tell you what this does to the atmosphere. The hostel consists of a few separate buildings -- the reception/restaurant/meeting room building, the dorm building, and several self-contained apartments.

The location is pretty neat -- it's set back from the main road directly next to some woods and some nice walking paths. It's really easy to find if you're traveling on your own wheels and there is plenty of parking space available. If you're more of a bus-tour person, you can catch the Kiwi Experience at the daily stop here. It is also convenient enough for some of the attractions -- the glowworm caves can be reached on foot as well as some of the tour providers. The further-flung tour operators can arrange transport to and from their facilities at generally no extra cost if you have booked a tour. It's also easy enough to walk into the village if you don't want to rely on the hostel's restaurant. Bear in mind, though, that the village itself doesn't have much to offer but a tiny general store and a handful of generally pricey cafes and restaurants, so bringing your own supplies wouldn't hurt.

The nicest thing about the hostel is its rooms -- they are bunk-free! Each room has four single beds and decent space to spread your stuff. Rooms are clean and well insulated, which is a good thing, as temperatures drop steeply at night. Unfortunately there are no security lockers, but overall security provided through key cards seems to be ok. All rooms have big windows, some allowing nice views of the surrounding nature.

Bathrooms are shared and separated into male and female and cleanliness can be dependent on whom Kiwi Experience has dropped off that day. Apparently bathrooms only get cleaned once a day, which isn't a lot considering the number of people that stay in the hostel.

The common area reminds us of the youth hostels from school trips -- they are designed to fit in a lot of people and make cleaning easy, which means no frills at all and all stainless steel or polished wood. There is no actual chill-out area with couches -- only the dining area and kitchen, which feels rather like a canteen. The kitchen has big fridges to store food and utensils for cooking. Cutlery and plates, glasses, and cups have to be collected for a deposit at the reception.

The kitchen suffers the same problem as the bathroom -- cleaning once a day, which is not enough! You wouldn't want to be the last person to cook dinner at night there! The dining area is not as bad. There is also a terrace with some outdoor seating right next to the dining area. Internet computers are available inside. In the building with the reception, there is a restaurant and yet more outdoor seating, but the style is the same uninviting sterility.

It surely is a good place to sleep, thanks to good single beds and quiet surroundings, but doesn't have a nice atmosphere. 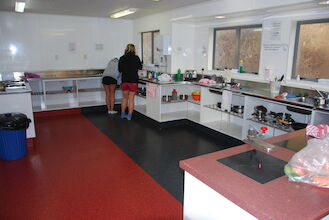 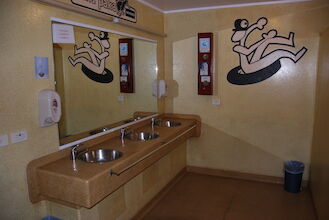 Was a great place to spend a night in Waitomo, the pizzas are incredible, and the big breakfast wasn't only big, it was HUGE. Must say the staff in the cafe were awesome. Definitely worth a visit.

Noisy and over busy

The facilities are good, and the rooms are clean, with helpful staff. But unless you want to share with noisy drunken Kiwi Experience people then this is a good place to avoid. I presume they sleep on the bus because they sure as hell don't sleep during the night. As well as the KE bus there was another coach load of happy travelers there the night we stayed. We finally got to sleep about 3 am, only to be woken up a few hours later when they all rose and made preparations for departure. To their credit the hostel staff were apologetic, and gave us a refund for the nights we decided not to stay. And I do understand its not easy to keep a hundred backpackers quiet. We moved a mile up the road to a quieter Hostel.

You'll be pleasantly surprised when you arrive at Kiwi Paka YHA, set in the lush landscape of the Waitomo area. If you're lucky you'll get the view we got.

This hostel is quite easy to find if you're driving (free parking!) and the village of Waitomo isn't big at all, with only a handful of places to eat and a few tourist shops. The hostel itself has its own cafe, which serves up great pizza and wine -- and a bonus is that the caves are in walking distance!

The hostel has a great atmosphere -- think log cabin meets now. The hostel has several complexes on the site, with a full range of accommodations. Dorm rooms have a maximum of four beds, and best of all no bunks. At the end of a long trip, the beds are a welcome surprise! There is a huge kitchen that is well stocked, maintained, and clean. Outside there is a BBQ that you can use to cook up some New Zealand lamb, and seating ranges from patios, lush grass, and the regular dining room setting.

A floor beneath the kitchen is a lounge room with a laundry facility and pool table. Each floor has its own bathroom -- showers are clean and there are places to hang your towels while you brush your teeth or wash your face. If you're planning on staying at this hostel it might be wise to take into consideration that this is a hostel that the Kiwi Adventure uses (but we still did have a great couple nights' sleep). Book ahead so that you can ensure you get a bed at night -- it's definitely worth the trip to Waitomo. 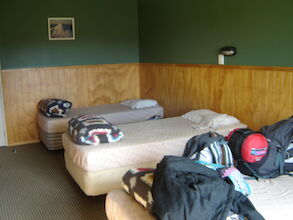 This is a large hostel and is used by several tour bus companies. The night I stayed three tour buses were also staying which made it very noisy both in the night and in the morning. The reception was helpful and the bathroom was fine, I didn't use the kitchen. There is not much to do in Waitomo beside the black-water rafting so I doubt people stay here longer than a night, which would explain why the hostel had no atmosphere.

Waitomo is beautiful and mysterious both above and below ground. Take the Ruakuri bushwalk through lush forest, enter the underground caves to see our world famous glow-worms or go on an adrenaline filled black water rafting trip.

Kiwipaka is a unique and relaxed rural New Zealand getaway, nestled in mature trees in Waitomo Village. Only a 2 minute walk from the glow –worm caves. Large sunny decks over look awe-inspiring scenery.

Our accommodation is alcohol free but we have our licensed Morepork Pizzeria & cafe on site open for breakfast, lunch & dinner. We also have conference facilities and can accommodate groups.
(Under new management since Jan 2010)

Kiwipaka Waitomo is listed on the following booking sites:

www.waitomokiwipaka.co.nz
Phone Number: +64 7 878 3395
To add or correct information for this listing, please use the Listing Correction Form.

Reception Hours: 8am to 8pm

See all 3 hostels in Waitomo

See all 3 hostels in Waitomo