8.8
63 Reviews
We compare all hostel prices in Wellington for you. So you save money and time!

On the bright side, there are more hostels in Wellington...

your hostels in Wellington

How is YHA Wellington rated on booking websites?

The hostel is average, nothing major exciting. The rooms are very small -- I stayed in a 6-Bed Dorm room. The kitchen area is nice and the seating area. You need to pay for Wifi, which I find a joke. The bathroom & toilets are clean. Ok, for a short stay. Next time I would stay closer to the Bus/Railway station as you have to take a bus from this hostel to get there.

Wellington is the city much different from Auckland. I got many people's help and most of them are strange. Here the YHA Wellington City has very neat room. May be here is not luxury hostel. It is enough to relax myself and got a good rest. BTW, there is a very beautiful, humorous and friendly staff in this hostel. Restaurant is big and has well management.

Large and rather impersonal college-dorm-like accommodation

This was our first and only YHA stay in NZ. It was huge -- a huge commercial kitchen, a huge high-rise of rooms, a huge sitting/games room, a huge eating space. The staff is nice, but very sparse. We stayed in a private double, and the weird thing was there was only 1 bathroom (with 3 showers and 3 toilets each) per floor, and each floor easily had over 20 private rooms. Overall, it lacked the character we found in all other NZ hostels. Pros -- great location in downtown Wellington,

HI - YHA Wellington City Hostel is a bustling six-story urban hostel. Reception is open until midnight, and common rooms are in use around the clock.

The hostel is within easy walking distance of Te Papa, and there's a New World supermarket right across the street. Once you're there, it's conveniently located. The difficulty lies in getting to it. If you're traveling light, you can catch a city bus from the railway or bus station, or take a shuttle from the ferry to the railway station and then a city bus. With luggage, however, you'll need a shuttle or a taxi.

There are four-, six-, and eight-bed dorms and most if not all dorm beds are double bunks. There are gender-segregated bathrooms on each floor, as well as an accessible unisex bathroom. Single, double, and triple rooms are also available. Our mattress was a bit thin, but the bed was soft.

There are two large kitchens, well-equipped with pots, pans, and appliances but lacking in spices -- when we were there, they did not even stock salt! Each kitchen has its own dining area. There are several other lounge areas, including a smokers' lounge and an internet lounge with kiosked computers. The Global Gossip Wi-Fi is reliable in common areas, but less usable in the bedrooms; we saw many people bringing their laptops to the lounges and dining areas.

YHA Wellington has an excellent location and it does well at being what it is -- a big-city hostel serving hundreds of guests every night. When we were there, there seemed to be little interaction among groups; there was much lively socializing in the lounges, but the participants all seemed to be traveling together. Most of those we saw in the common areas were young -- college-aged or below -- though some older people were staying in the hostel's private rooms.

Be aware that no heat is provided in the hostel from December to April, even though nighttime temperatures in Wellington in summer can plunge to 50 F. If this is not an issue for you, or if you are traveling to Wellington in the off-season, you may have a pleasant stay at YHA Wellington. 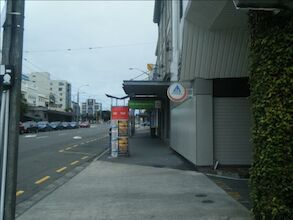 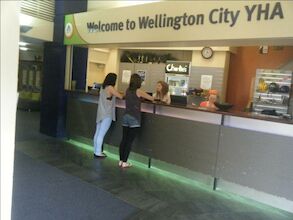 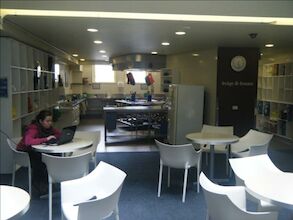 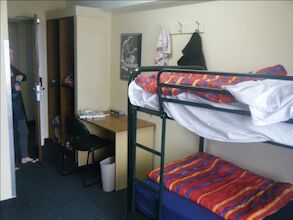 This place was great! Very clean -- facility, rooms, bathroom, laundry room. The front desk staff was very friendly and cheerful and nice to us. The hostel has all kinds of information posted, such as the weather report, transportation information, and things to do in Wellington for free. It felt like a comfortable and friendly place. They have a travel desk for bookings (this was helpful, though the girl working there tried to push us into a couple of things, and the hostel she recommended wasn't good), and a guy gave us a cup of coffee while we were there. The building is very conveniently located near the Te Papa museum and a short walk from cafes and such. We had an en-suite twin private room, which was very nice, had a table and chair and a free chocolate bar. We hadn't wanted to pay for an en-suite, but it was the only private room available, so the guy gave it to us at the YHA discount price, which was nice. Our beds were comfortable, there was a heater in the room (only stayed on 30 min at a time, but generated a fair amount of heat), and we felt just very relaxed and comfortable there. A shuttle stops there each morning to take passengers to the ferry to picton, which was also very convenient. Altogether, I would thoroughly recommend this hostel.

A fantastic place to stay in the Capital!

I and my children spent a seven-week odyssey Down Under late Spring and Summer 2006. We arrived in this hostel after a train ride from Christchurch and then ferryboat to North Island. Wellington is often called the Chicago of the South due to the winds, but I've never seen Chicago this windy! We arrived unannounced at this hostel as the Sun was setting, and the smiling reception took us in. We shared a four-bed room with another man. It was quite acceptable as we were all courteous with each other. The hostel is very clean, quiet, and surprisingly spacious. Unfortunately, we didn't really get to see too much except that we were very close to bars and night life. We had to catch a bus to Auckland early the next morning!

Excellent all round hostel!

Brilliant hostel. Centrally located, good facilities and reasonably priced. I stayed in a twin room with my girlfriend and found it to be better than many of the guesthouses we'd stayed in! I cannot fault it.

Our travel booking service boasts experienced staff that are happy to plan, reserve and ticket a huge range of activities, transport and accommodation for you.

Very clean, atmospheric and well maintained. This is backpacking in style. Check out our famous Activities Program including pub and quiz nights and special DVD movie theatre nights.

Ferry: Catch the 'free' Interisland ferry shuttle bus to the railway station - platform 9. Walk via the subway to Stagecoach bus stop. Catch the Number 1 or 2 bus to the last stop on Courtenay Place for $1. Turn left onto Cambridge Terrace, Hostel 50m on your left.

Coach: (InterCity) Ask your driver to drop you off at the Fire Station opposite the Hostel.

Airport: Buses depart from the south end of the terminal every 20mins. Get off at Courtenay Place and turn left onto Camridge Terrace, Hostel is 50m on your left. Alternatively, take a shuttle direct to the hostel. We have a Freephone at airport for hostel bookings, for your convenience.

NZ' Harbour Capital, Wellington is a compact and diverse city. Easily navigable on foot, make sure you plan a couple of days to explore. A feast of cultural attractions, over 50 galleries and museums, including the monumental Te Papa, NZ's National Museum. Stunning scenery makes outdoors a real highlight.

Visit seals and penguins in the wild, take the famous red cable car up to the botanical gardens, try a ferry trip across the harbour or climb Mt Victoria for breathtaking views. Alternatively relax or play in one of the many cafes, restaurants, clubs and bars. An easy city to walk around, high rise downtown gives way to suburbs of attractive architecture that cling to beautiful green hills. Catch the historic cable car to the Botanic Gardens. Visit galleries, parliament buildings or take in the views from Mt Victoria. The spectacular national Museum of NZ (Te Papa), only a short walk from the hostel, will ensure a true New Zealand experience. This dynamic city boasts some fantastic cafés, bars, clubs, restaurants, cinemas and theatres that are second to none. Alternatively, just stop and relax.

See all 11 hostels in Wellington

On the bright side, there are more hostels in Wellington...