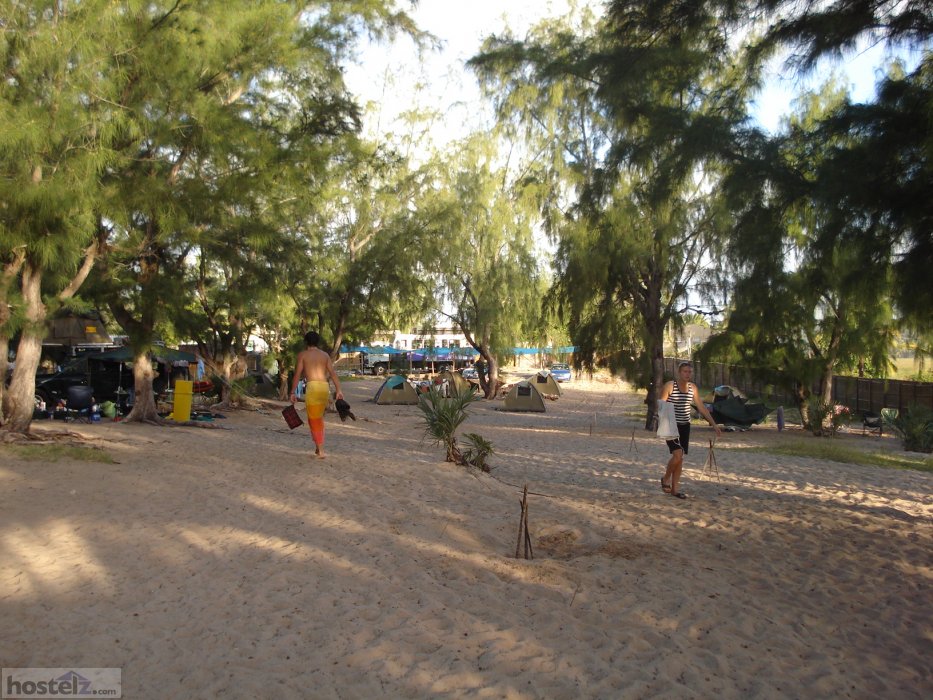 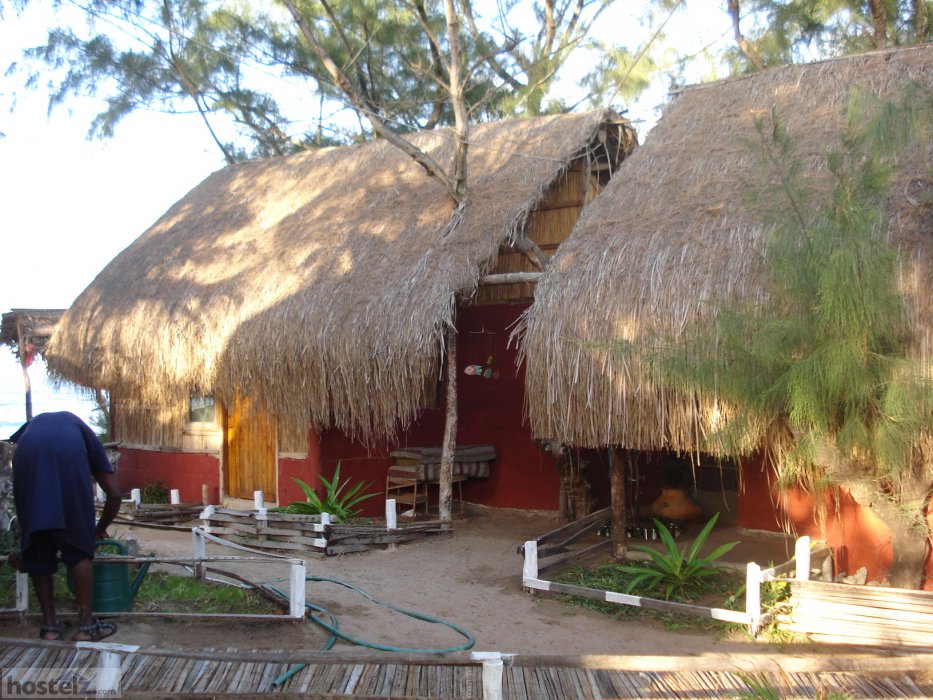 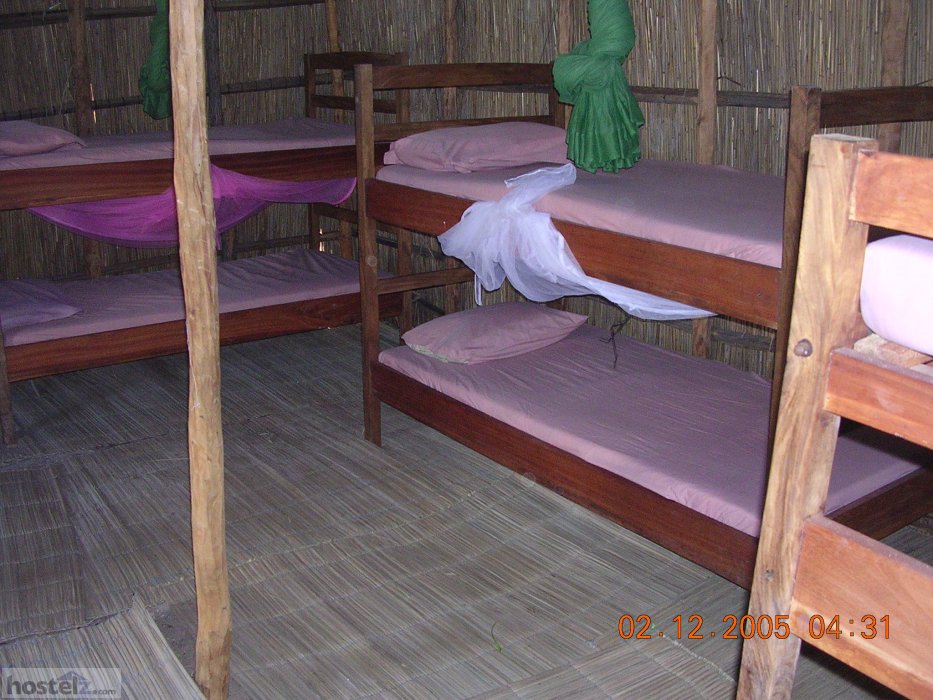 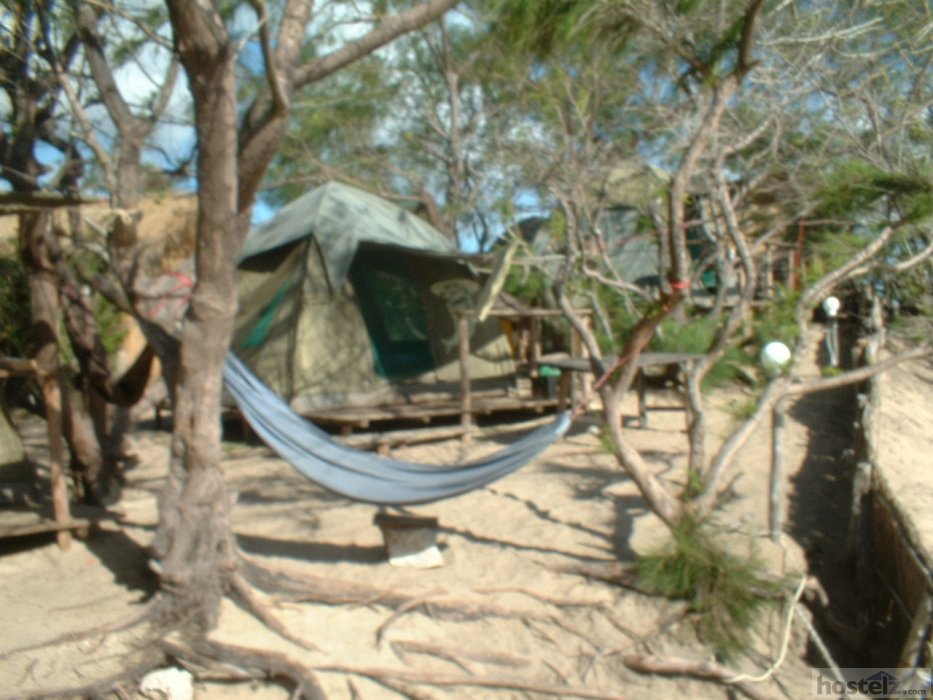 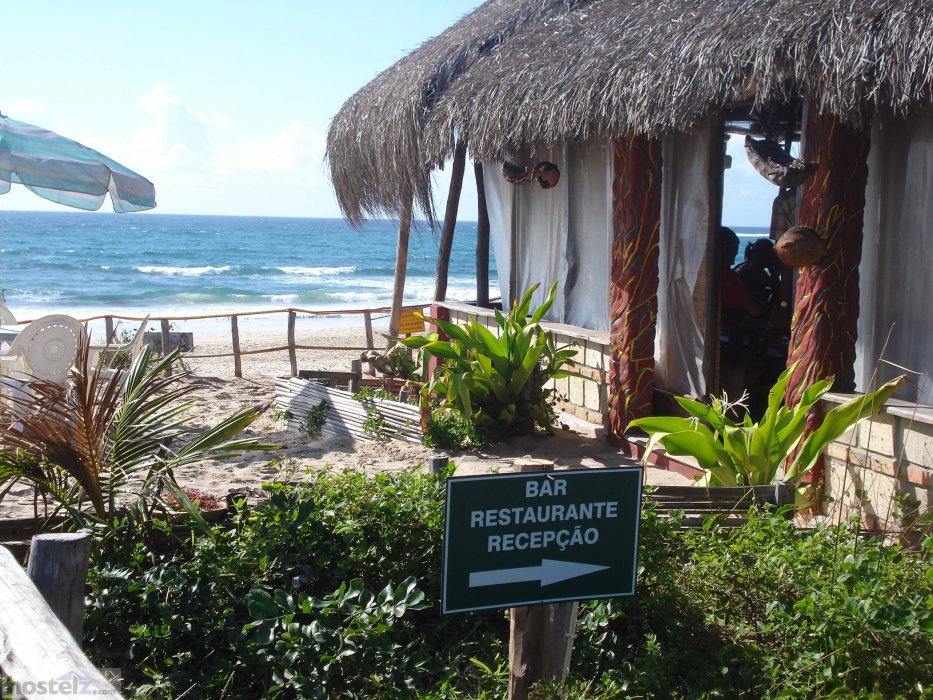 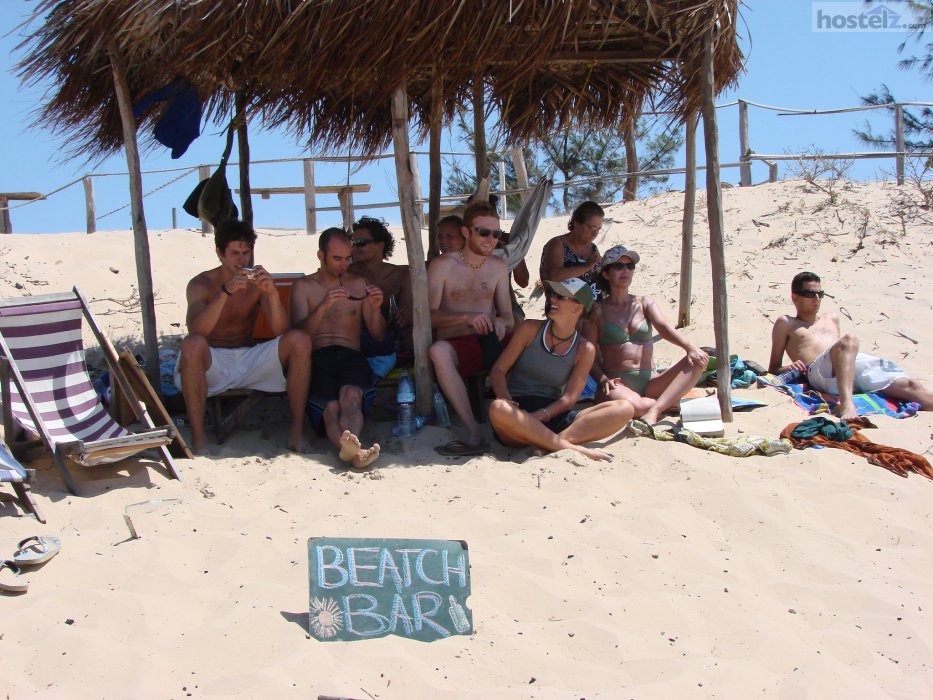 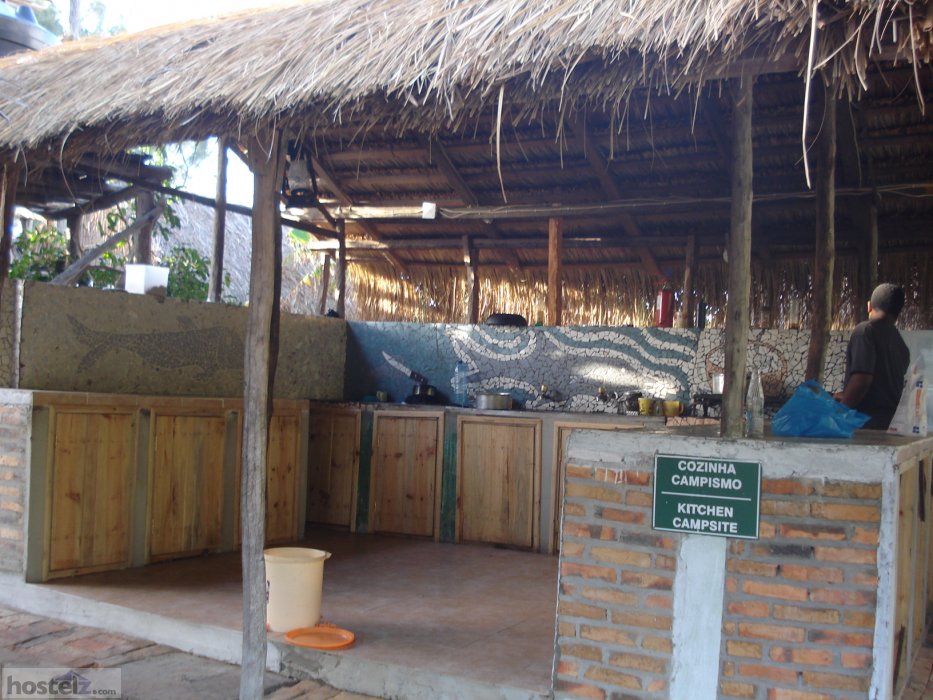 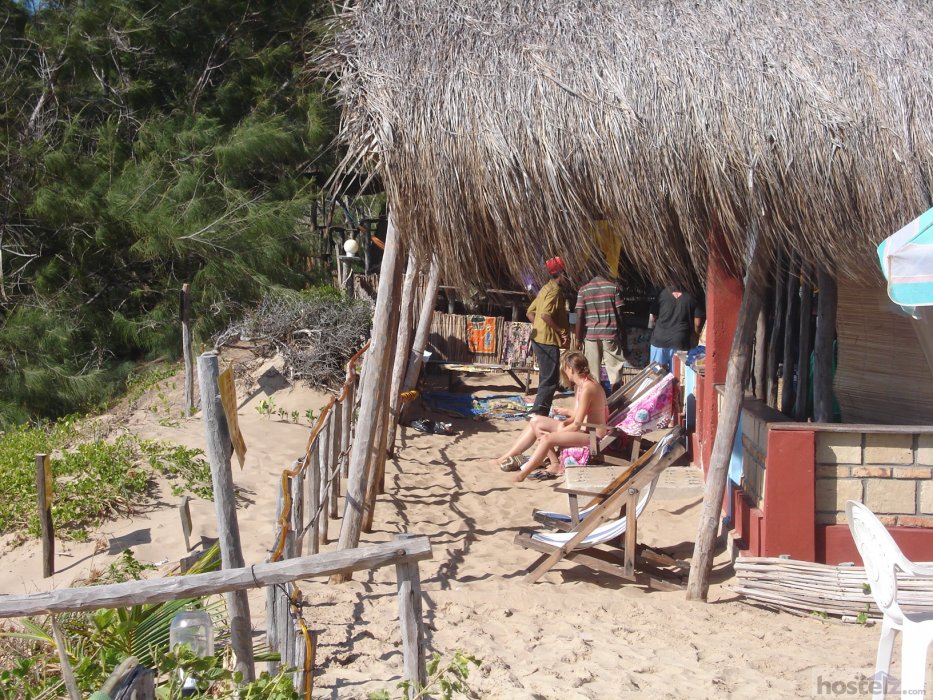 Fatima's Nest is a great place to base yourself to experience all that the area has to offer. Tofo Beach has long been the big draw for travelers in Mozambique with its wide, clean, sandy beach and a plethora of water activities, not to mention the chance to see whales, dolphins, and whale sharks.

Tofo is a thirty-minute minibus ride from Inhambane, itself, reached by a thirty-minute ferry from Maxixe, the nearest big town on the north-south Highway One. Situated along a stretch of sand dunes right by the beach, this place oozes rustic charm with its thatched wooden chalets, huts, and its lively bar. It's just five minutes’ walk from the center of the village, the market, bus stop, dive shops, and a ten-step walk down the wooden steps from the bar to the beach. Fatima's has long been established on the backpacker route, due in part to its sister lodge in Maputo.

This large, walled property has a multitude of huts and chalets from which to choose. In fact, it can feel a little claustrophobic -- there are so many! The backpacker option are the dorms, of which there are four (ranging from six to fourteen beds). Each room comes with mosquito nets and fans and it's all reasonably clean, though the foam mattresses are a little cheap. The bed linen, however, comes at the cost of quite a hefty deposit. There are plenty of lockers and cupboard space, and the communal toilets and hot water showers are all kept pretty clean.

The centerpiece of Fatima's is the large wooden bar/restaurant with that great view across the beach to the ocean just meters away. It boasts an extensive menu with a cocktail list. The prices are ok. Plenty of tables and chairs are provided. Evening Wi-Fi is free and there is a pool table. There is a sprinkling of hammocks and deck chairs around the grounds with a couple of sun decks by the bar. The communal kitchen is useful for self-caterers, but you'll need to bring all your own pots, pans, and utensils, as there are virtually none here.

All in all, this is pretty good value, as it sits mid-range in pricing and facilities. There is a little hard sell on tours here, but that's easy to brush off and do your own thing. There are plenty of dive shops and operators in the village. Fatima's also run their own minibus to Maputo every morning at 4 a.m., which takes you to their sister lodge Fatima's Place. A little more attention to detail would make this place stand out, but you won't go too wrong here. It's all about the location.
Photos taken by the Hostelz.com reviewer — Genuine photos you can trust. 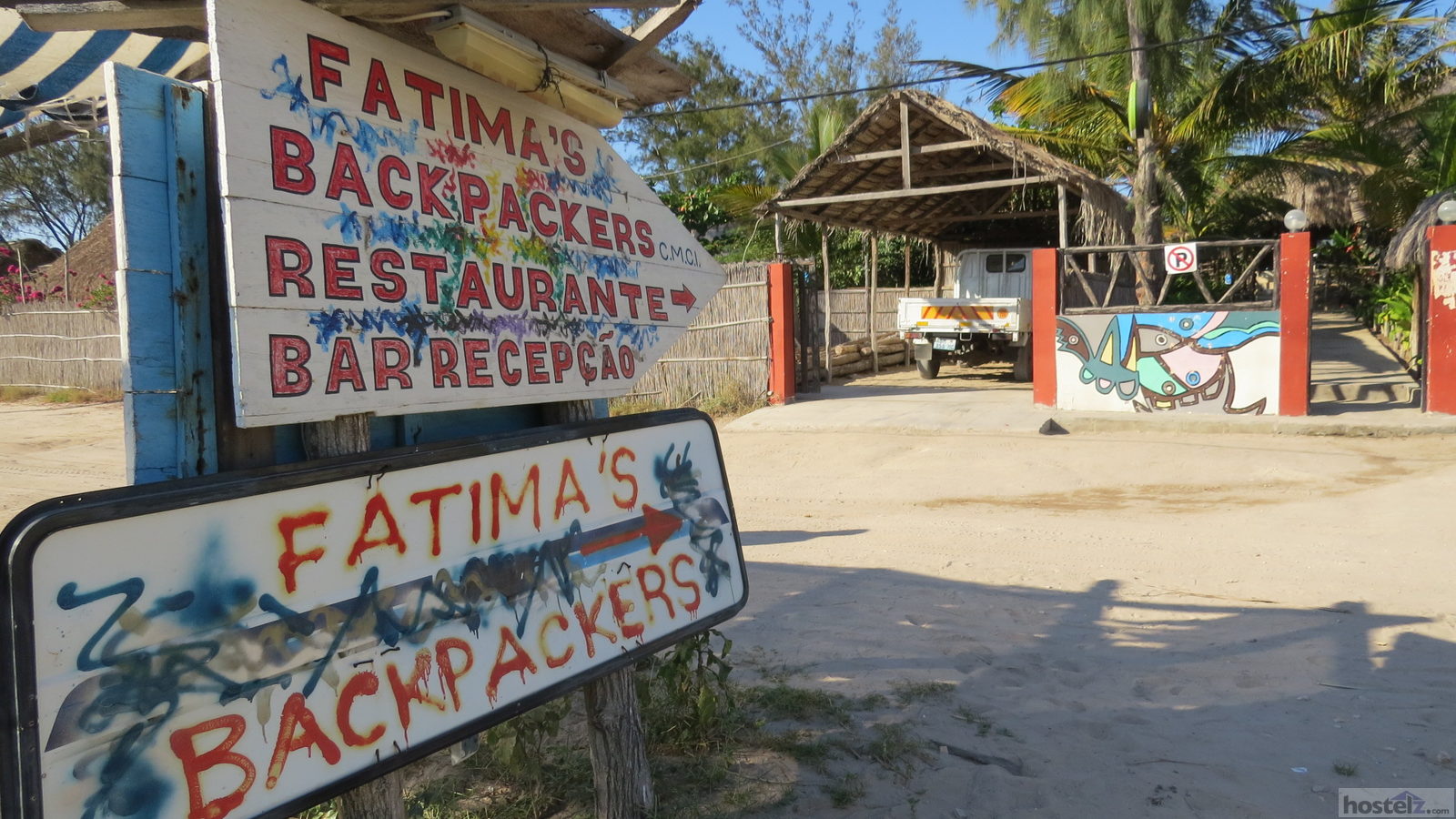 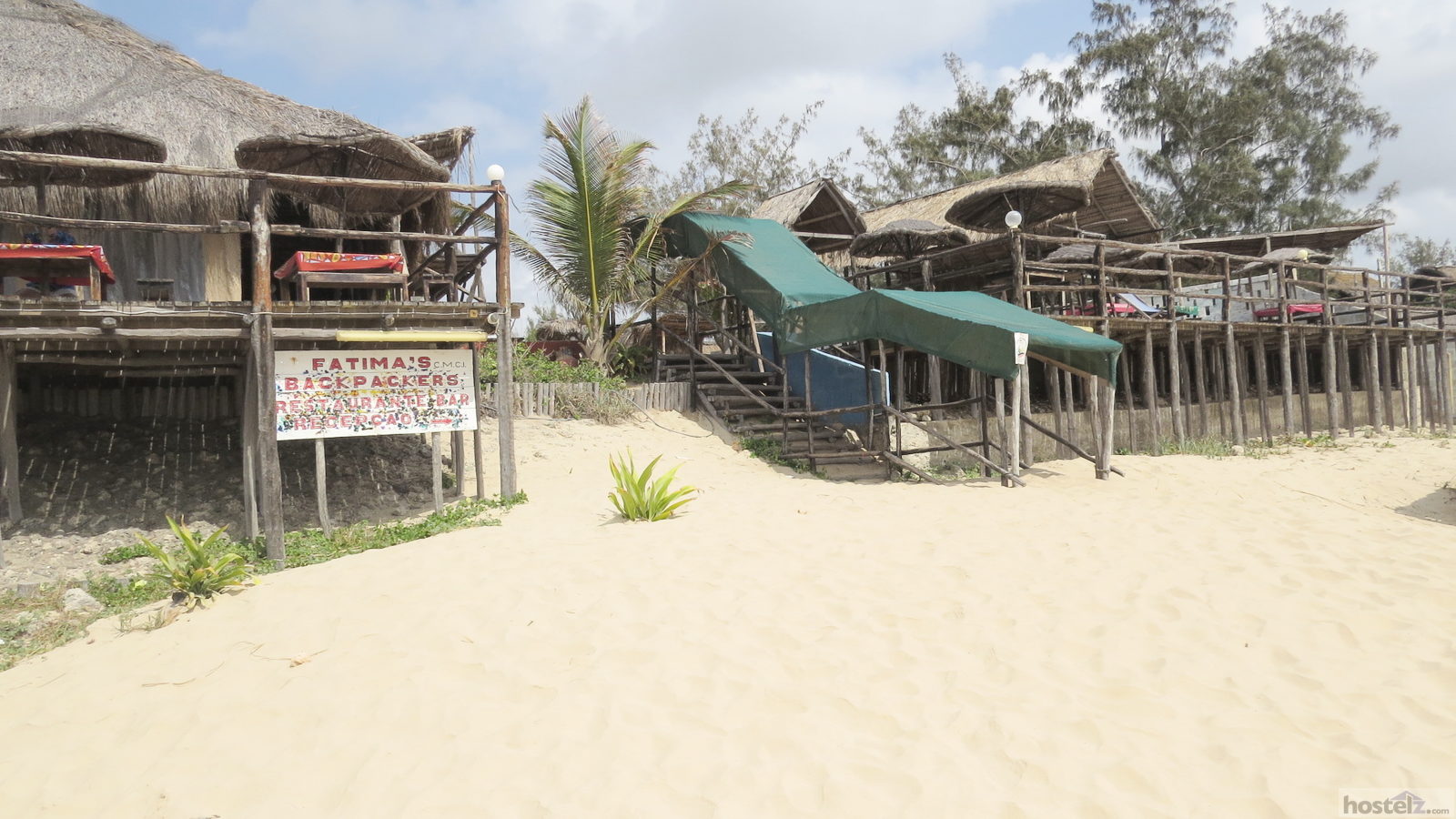 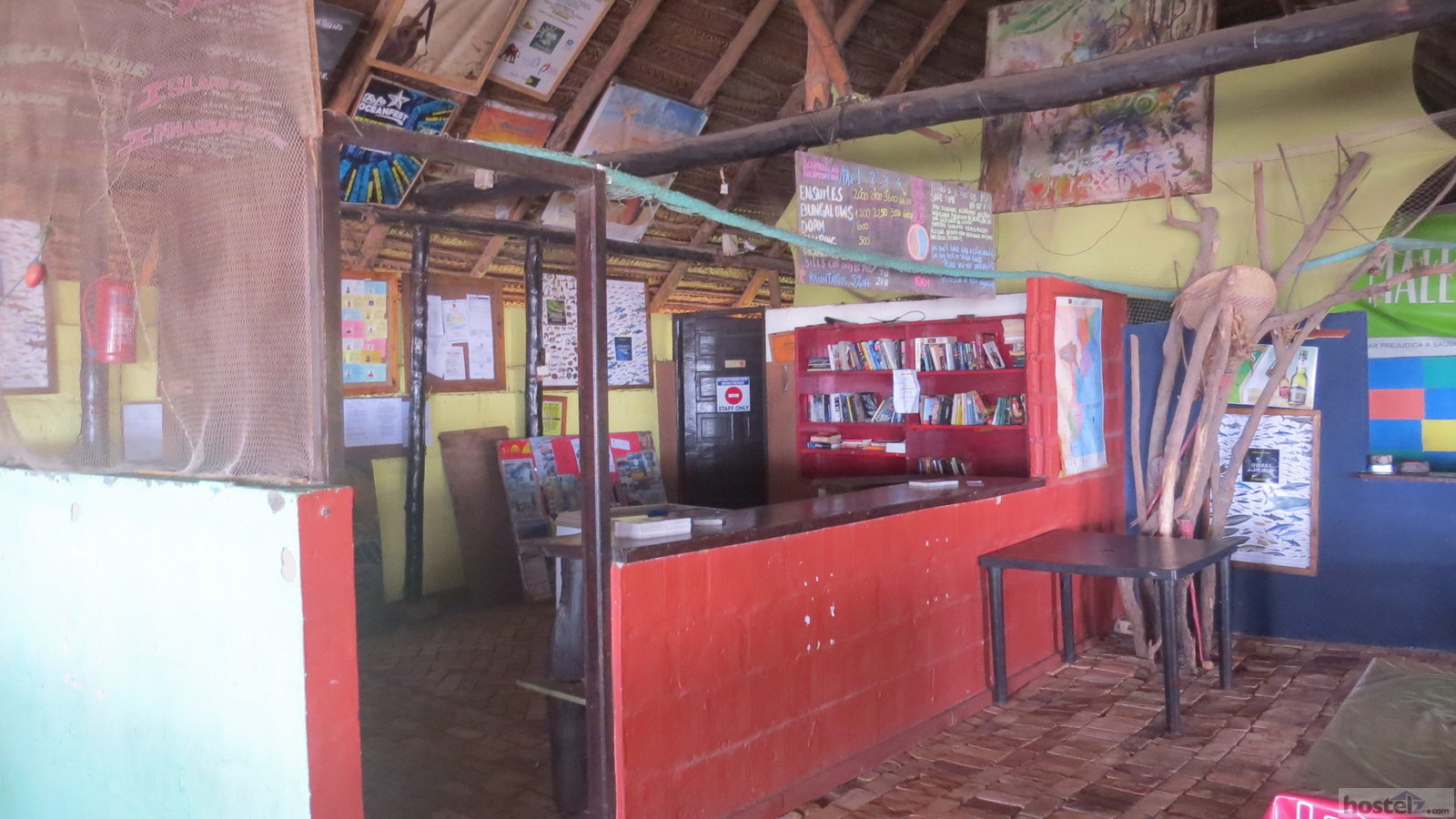 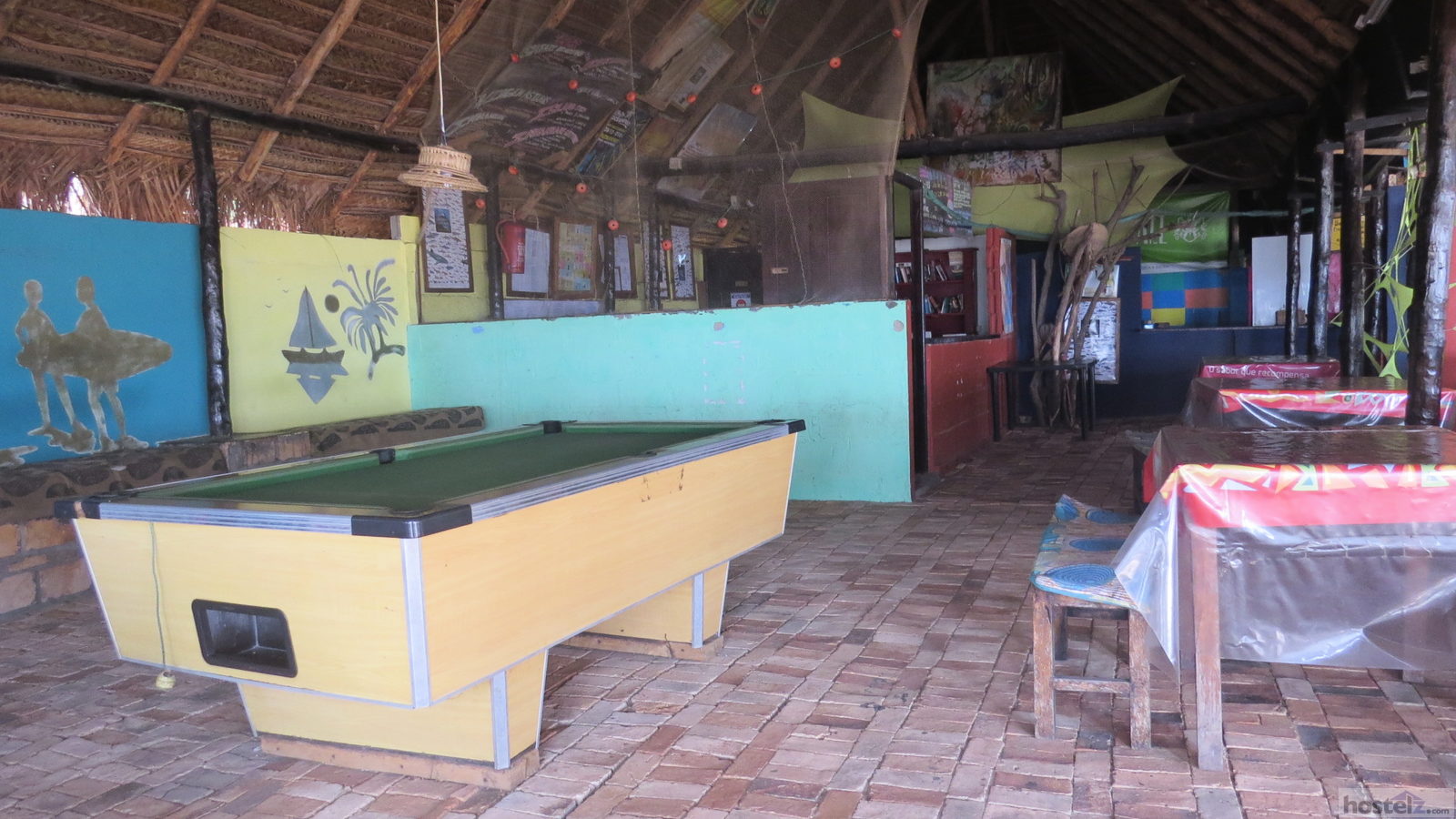 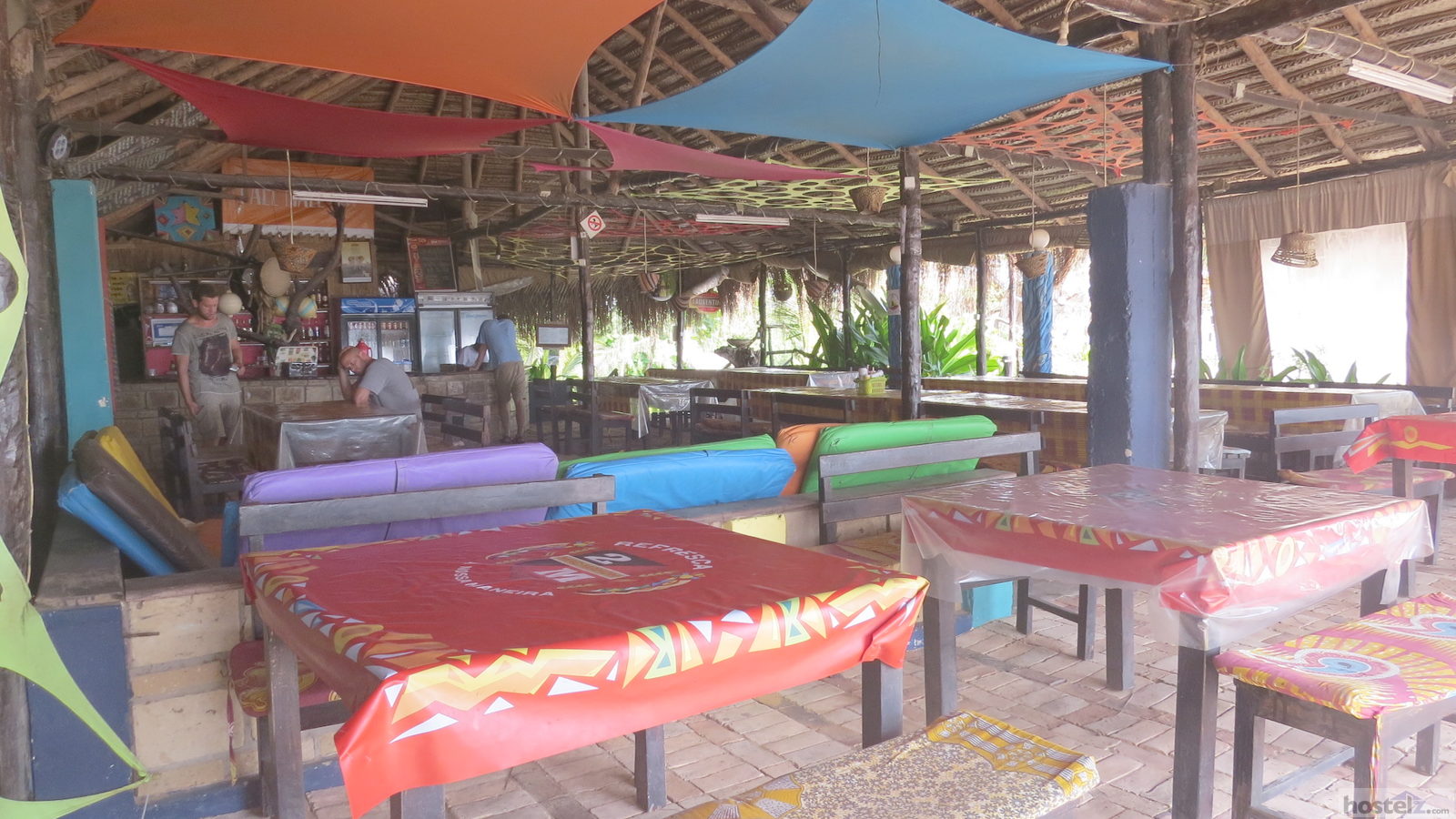 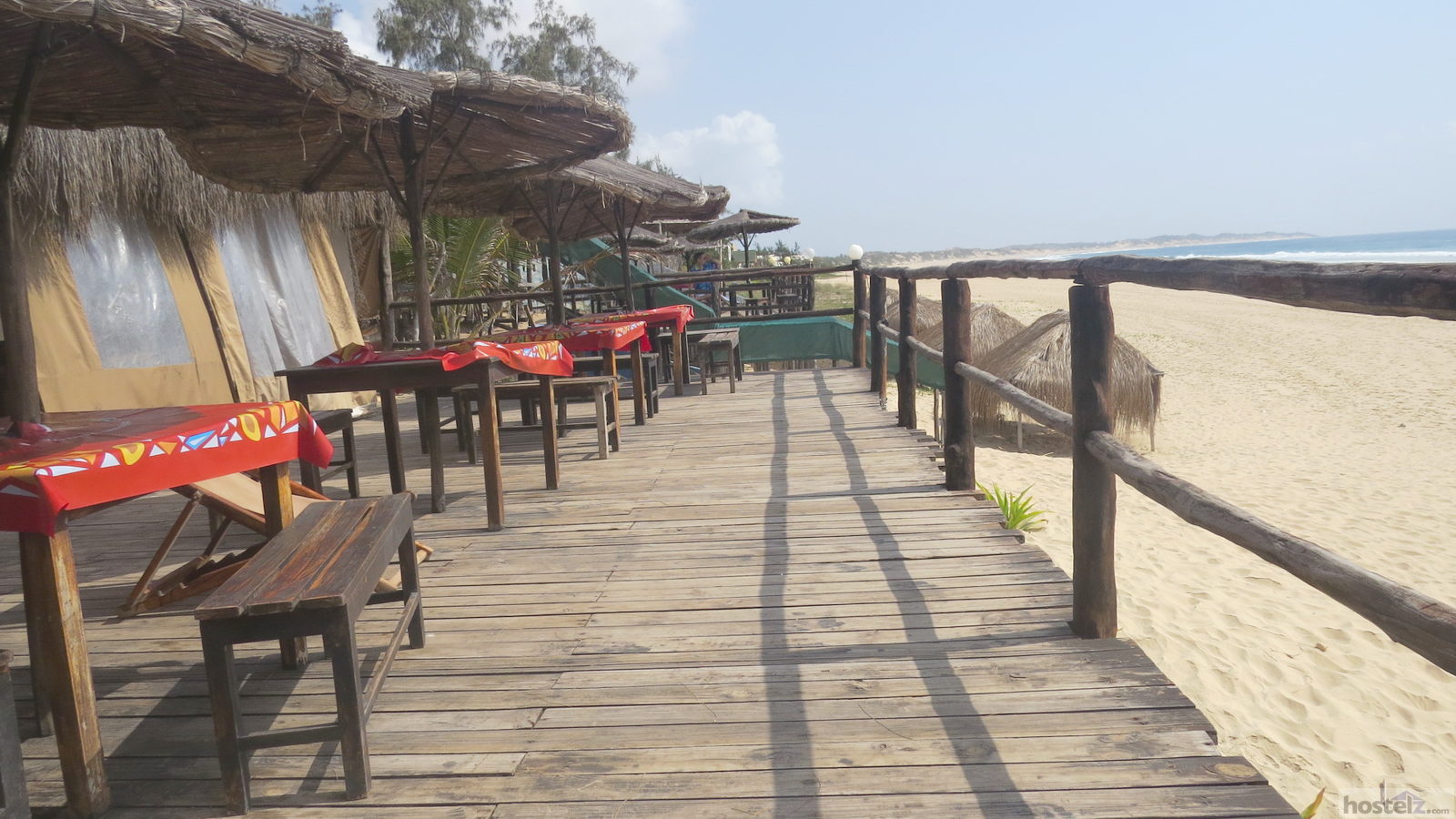 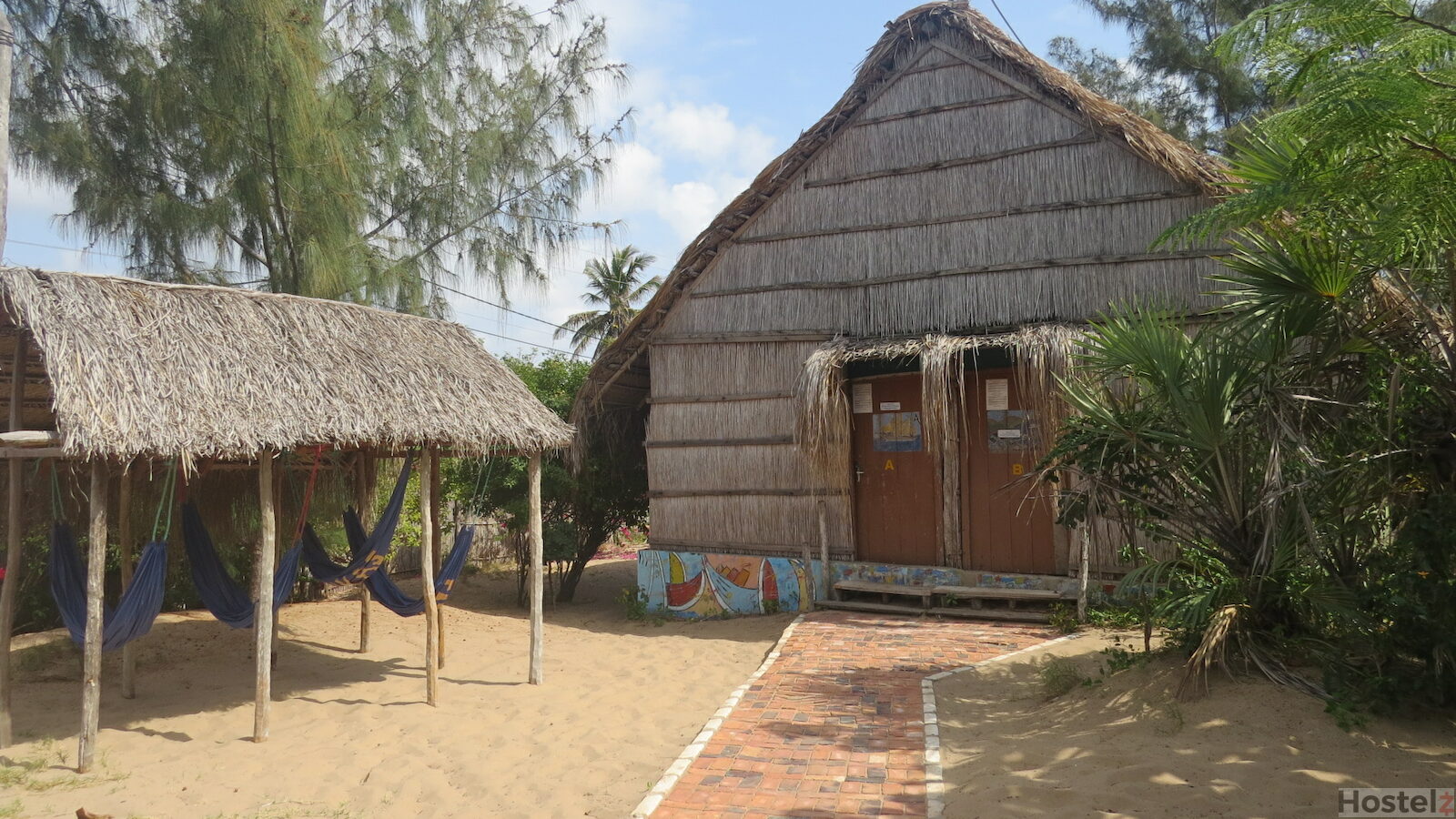 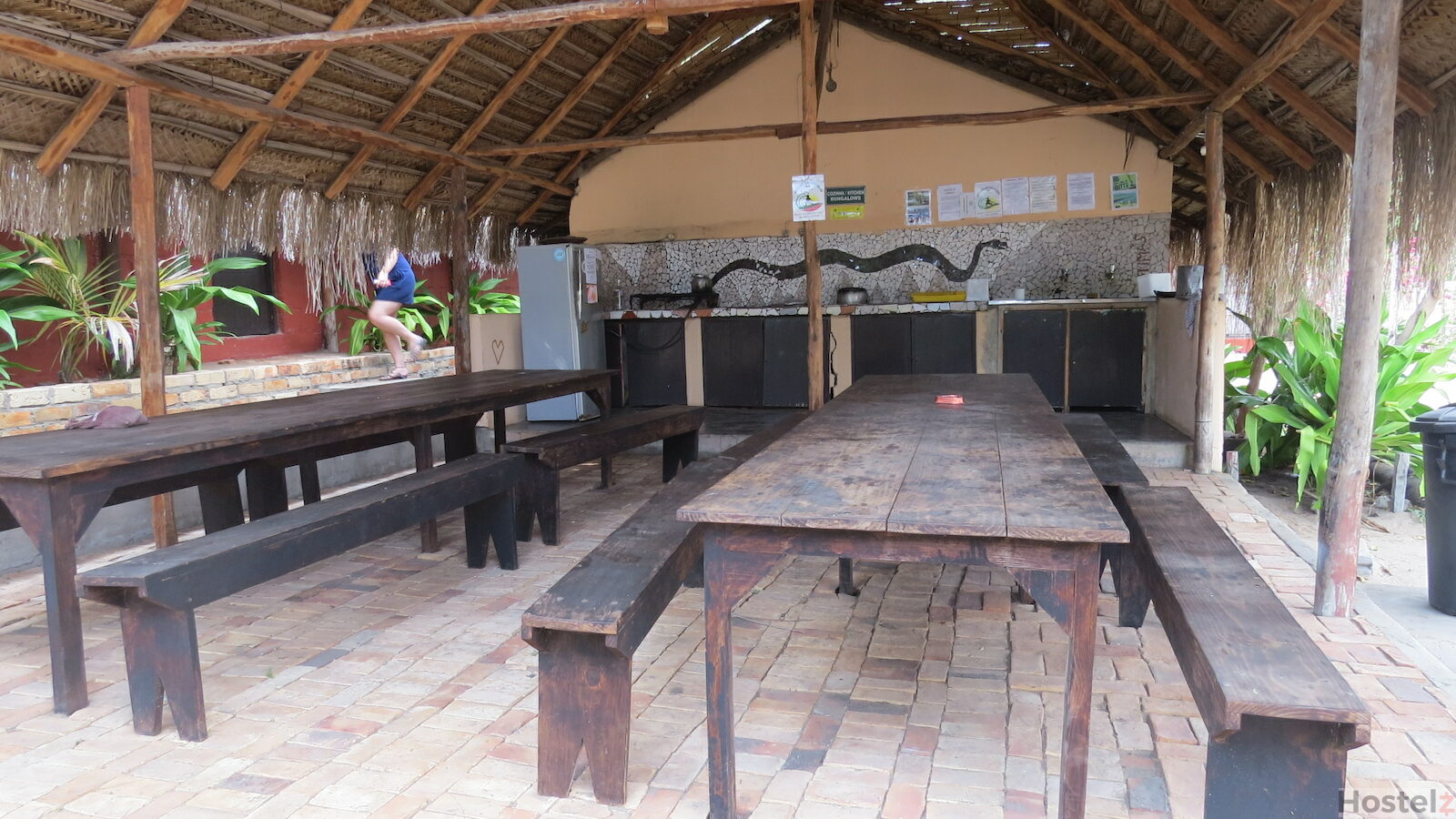 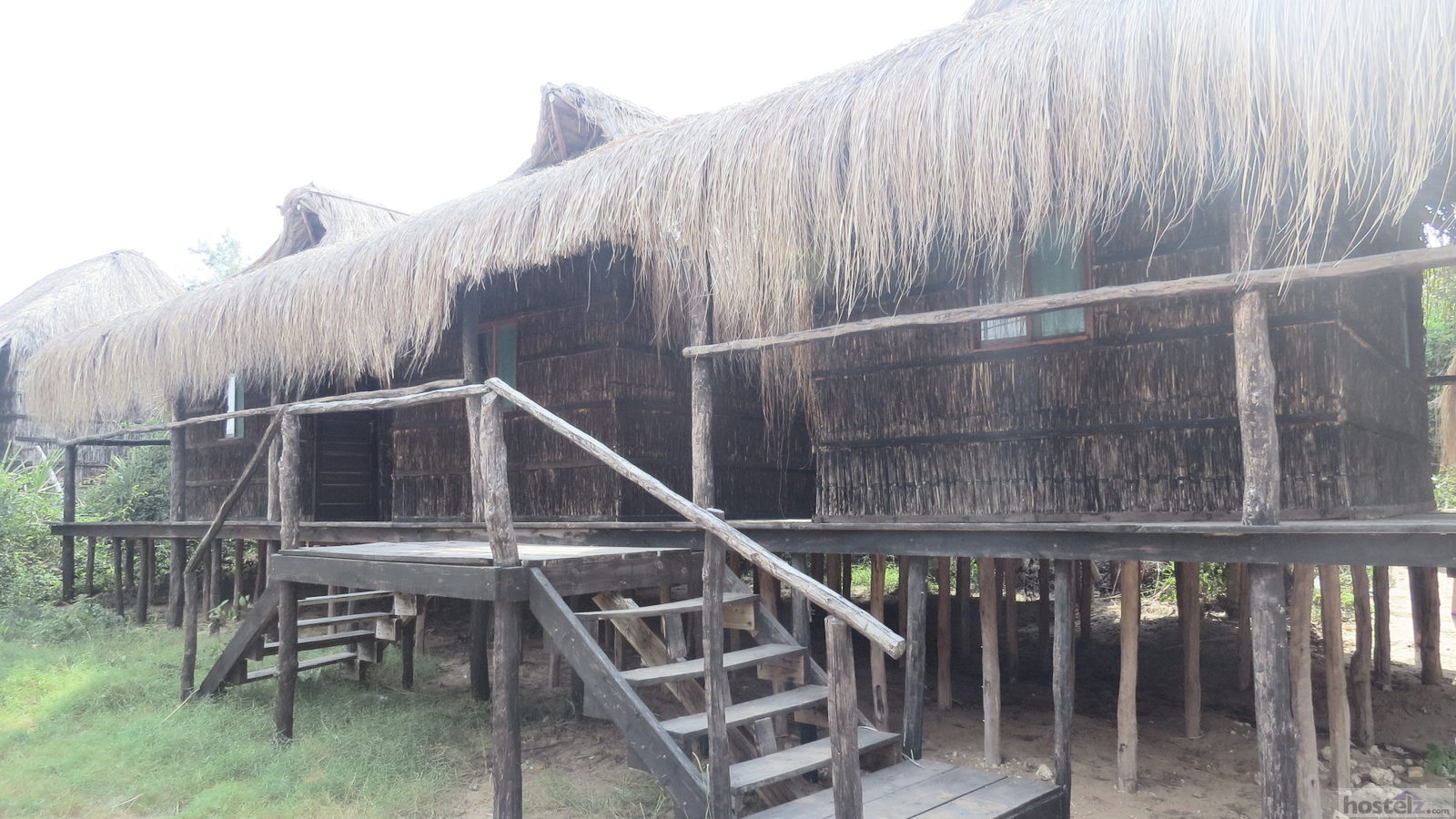 Fatima's Nest is listed on the following booking sites:

www.mozambiquebackpackers.com
Phone Number: +258 (0) 1 302 994
To add or correct information for this listing, please use the Listing Correction Form.

Fatimas is undoubtedly one of the best places we visited. which features great music. good food and service 5 stars. who is going to Fatimas is to know always want to come back. and we look forward to another year of the greatest festival of the end of the year in Moz.

I have stayed at Fatima's Nest several times and I loved it every time I was there. The casita with private bath was cleaned everyday, food was very good and cheap, comparing with other places.

I had a wonderful seafood platter for less than USD10. The location is unbeatable. We wake up in the morning and the beautiful was there. Clean sand, magnificent ocean. I was happy in this place.

For value, Fatima's is best in Tofo and Maputo

Fatima's is an amazing woman, who mostly employs locals (many of whom she adopts as children when they are left homeless (poverty, disease etc) and raises them as her own. Many still work for Fatima for many many years and are extremely loyal to her for obvious reasons. People come to Mozambique knowing full well that Mozambique is a third world country wracked with abject poverty, if they bother to research their holiday destination. Do not expect cloud 9 beds and service, do not expect everyone to speak English, do not expect to find junk food, do not expect to pay cents for art and craft, and do not bargain desperate hawkers down to nothing. Do treat locals with respect, do speak to Fatima's staff for the best activities and prices, do learn some Portuguese, and do not complain about locals' apparent lack of communication skills when you are a foreigner in their land, do not think you can just do whatever you like in Mozambique -- use your brain!

all in fatimas was great, staff, place, food magical.

Watch out for a South African man called Peter who will try and rip you off by getting you to pay 600 USD to hire a boat to go to a nearby island for snorkeling. He will try to make a pass at any young women on the trip and employs some scare mongering tactics by telling you that Maputo's beach is not safe. You can take a ferry to the island for much cheaper or hire a boat for much cheaper. Also the visibility is poor for snorkeling around the island and him and his mate on the island will try to scam 45 USD (per person) for the snorkeling. This guy is to be avoided at all costs. He particularly likes to prey on tour groups.

Fatimas Nest was terrible. Everything was ridiculously overpriced and service was bad. Bathrooms were terrible and often no running water. the location is great but spoilt by this backpackers. Our trip to Mozambique was seriously tainted by this badly run institution. the owners and managers should have a serious rethink!

For what we paid, I expected more. The bed sagged in the middle and they had no path to the restaurant or bathroom that was not walking through sand. The restaurant was over-priced for the quality, quantity, and not very sanitary. Walk down to beach to Denos for the good eats. On the up side, they are right on the beach! They even have hammocks and are right on the edge of the city of Tofo. It was not the best, but we liked it better then any of the other options.

Stayed over New Year's. The beach party in Tofo was great, but the hostel was not. Staff are unfriendly, often no running water, they ran out of bottled water several times, toilets and showers are filthy (they just squeegee them out), they got everyone's bookings wrong and backwards creating a huge mess, food was exorbitantly expensive for Mozambique, shuttle between Maputo and Tofo was a ripoff and a falsely advertised way to extort Fatima's guests. The people were fun, but you'd do better to pay an extra few Mtn and head somewhere else further along the beach. Fatima's is fine as long as you're completely wasted the entire time.

How is Fatima's Nest rated on booking websites?