Schaffhausen Youth Hostel is listed at the following booking sites:

How is Schaffhausen Youth Hostel rated on booking websites?

A picturesque, home-like little hostel tucked away a few streets down from the Schaffhausen train station, Belair is an ideal place to spend the night if you are planning to spend a few days around the area.

From the train station, the hostel is about a ten- to fifteen-minute walk away. However this path is quite difficult to find without a map as it involves taking a shortcut through an unnamed road between several buildings, as well as a steep uphill climb. Thus, a better suggestion would be to take a bus to the hostel the first time round, then subsequently, instructions and a map can be obtained from the friendly counter staff. Several buses that go to the hostel leave from the bus stop directly outside the Tourist Information office at the train station.

The hostel consists of a single three-story building, where the rooms are located. They range from four- to eight-bed dormitories. The rooms are very clean and appealingly decorated, with quaint wooden furniture and colourful and cheerful bedspreads. The rooms can be considered to be slightly on the small side, but this just adds to its homey, cottage-like atmosphere. The bathrooms and toilets are also very clean and modern and brightly lighted, though again, slightly cramped. Hot water is available for the showers, however, the heaters are switched off after twelve midnight, which is a major inconvenience, especially when there is a long line for the showers.

Also, for the more sociable folk among us, it would be good to bear in mind the fact that this is one hostel that definitely values peace and quiet. Any noise made after twelve midnight is severely frowned upon and may lead to you being told off!

The breakfast provided in the morning is very good, with various kinds of ham, pate, yoghurt and cheese in addition to the usual bread, coffee, tea, juice, and cereal.

Major sights like the Rhine Falls are only a fifteen-minute bus ride away, and Schaffhausen itself is only a one hour train journey away from Zurich. We would recommend this hostel to anyone desiring a peaceful and convenient place to stay in Schaffhausen. 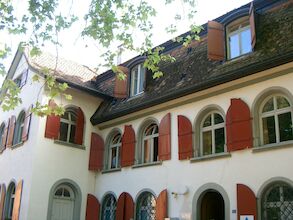 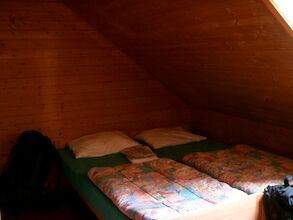 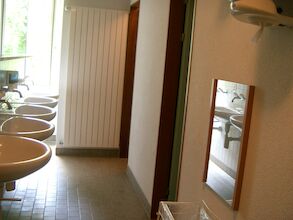 According to the song by Dieter Wiesmann Schaffhausen is just a small town. But what a town! Between Munot, Rhine Falls, Randen and Klettgau lies a medieval little place with an irresistible attraction. And, ten minutes away, a youth hostel in a small castle. At one time the meeting point for writers and painters, today it is open to all connoisseurs of the art of living.

Schaffhausen Youth Hostel is listed on the following booking sites:

www.youthhostel.ch/schaffhausen
Phone Number: +41 52 625 88 00
To add or correct information for this listing, please use the Listing Correction Form.

See all 3 hostels in Schaffhausen

See all 3 hostels in Schaffhausen