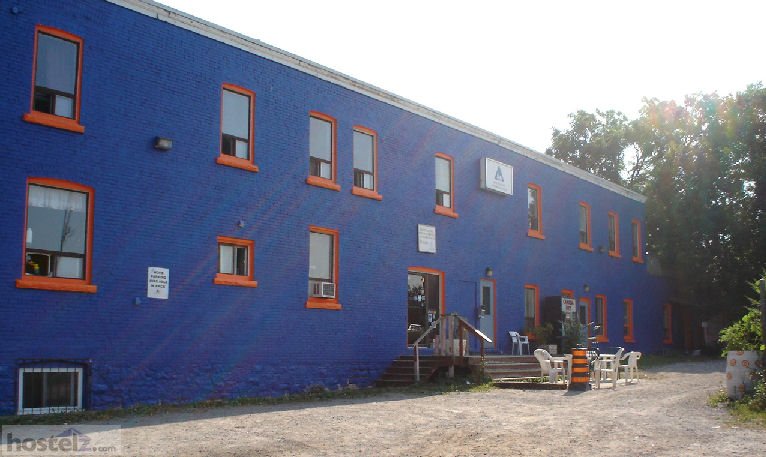 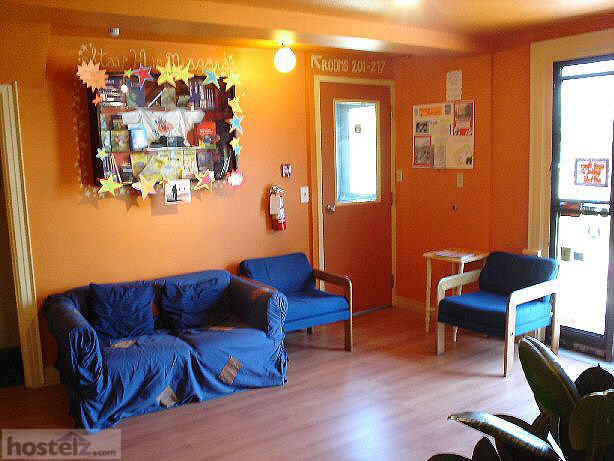 www.hostellingniagara.com
Phone Number: +1 (905) 357-0770
To add or correct information for this listing, please use the Listing Correction Form.

Super cozy hostel. You can easily walk to the falls from here but you are not in the middle oft the tourist crap. The area around is quite vast, but in Queens St close by are nice places to eat. Just follow the staff's recommendations. Breakfast is simple but ok, showers are great. And the ladies at the reception were super friendly, they spent 30 mins answering all my questions and giving me suggestions for how to spend my day best.

Should have just read the bad reviews!!!!

This place is a hole. Don't believe the pictures either. They were most likely taken years ago. The grass area is almost completely mud now and the building has cracks on the outside structure. The building smells like weed constantly from the staff sitting outside and getting high. They have a Hostel dog there. This dogs poops outside in the common area and chews people belongings and then when you question the manager about replacing the damaged items he just ignores you. I would hate to be someone who has allergies to dogs staying there, because the dog has free roaming of the whole property. Avoid at all costs. you can get hotels in the city for the same cost as this hostel and they're 10X cleaner.

Definitely not the best

we have just returned from our trip to Niagara Falls. I have stayed at a handful hostels in three different countries, and i have to say, this one is the worst so far. we are easy to please people, and nothing really went wrong, so honestly we enjoyed our stay very much, but compare to all the other hostels, i had to give a harsh rating. there's not enough bathrooms. we stayed in a private room on the second floor. based on my count, there are sixteen rooms on the second floor, but a total of two bathrooms. on our half (eight rooms) there's one bathroom with one shower, one toilet, and one sink, sharing the same door. that means if someone's brushing their teeth, no one else can use the toilet or shower. the second bathroom in the hall is slightly better, with two sinks and a separate door for toilet and shower. but it's sort of an interesting experience to be taking a dump while two people right outside of the door are brushing their teeth. Sixteen rooms means thirty-two people sharing two bathrooms is just ridiculous in my opinion. this hostel is overpriced. after tax and everything (without membership) our private room came out to be about $60. the hotel next door (with swimming pool and private bathroom) is same price. to me, hostel should be cheaper than hotels, especially when the amenities are this poor. this is the first hostel i've stayed at that charges money for using their computers. the so called "free pool" only has eleven balls. and the so called "free breakfast" is nonexistent, unless you consider coffee to be an entire breakfast. However, the kitchen was big, and pretty clean. the utensils are bountiful. there's a shelf of "free food" left by previous guests with lots of bottles of seasonings, which i thought was a great idea. there are some cheap and good restaurants within walking distance. a hole-in-the-wall Chinese restaurant that was recommended to us by a staff was a real gem of a find! this hostel is definitely very closely located to several bus stops, train stop, and a bus terminal. we had a rental car so we did not take public transportation, but it appeared to be very convenient. the staff are helpful but not friendly. none of them would say hi to you. that didn't bother me, but may bother some people. the game room (basement) is very so-so. it has a smell, the TV is very fuzzy, and the air hockey table has no puck.

The Hostel International Niagara is located at 4945 Cataract Avenue. It is only a two-minute walk from both the bus and train station. It is about a forty-five minute walk along River Road to reach the world famous waterfalls. The hostel is located in a quiet part of town away from the main attractions.

The hostel has private and dormitory accommodation. Towels and linen are provided for guests. Dorm rooms are quite small and offer little space for luggage and belongings. But lockers are available for guest usage in the basement at a small fee. Shared bathrooms are located on each floor and are kept relatively clean. Accommodation is available for monthly rental in the winter months.

The kitchen is spacious and provides all needed facilities for cooking. There is also a dining area which is smartly decorated with mosaic tiles on the walls.There is a lounge in the basement with a free pool table. There is also a television and several movies to choose from. Coin operated laundry is also available for guest usage. A small, somewhat limited book swap is also located in the basement. There are also various board games and video games available. There is wireless internet throughout the hostel -- this service is free of charge for guests traveling with laptops. The hostel also has two computer terminals, which can be used by guests for a fee.

Attractions and tours can be booked at reception. The staff also organises various activities throughout the week, such as pub crawls, pancake breakfasts, and discounted tickets to various tourist attractions.

The hostel is aged but colourful and it offers a friendly atmosphere. It provides a nice base to explore Niagara Falls as well as the surrounding areas. 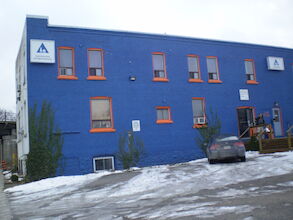 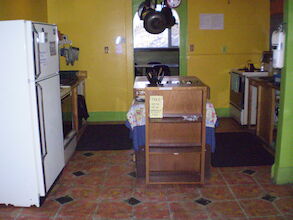 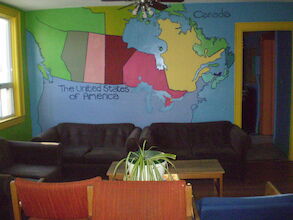 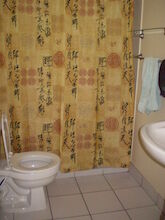 I stayed at this hostel about 6 different times over the past 3 years (although I have yet to stay in the summer months). I live about 3 hours from here in Pennsylvania and often come up for a few days or stop here for a night on my way to/from visiting a friend in Toronto.

The place is nice, better than average. It has a colorful "artsy fartsy" atmosphere to it. One of the best things about it is that it's very near the train/bus station. If your standing in front of the train station just look to you left a bit and back across the street a bit... it's only about 100m. One of the worst things is this place is it's about a 25 min. walk to the falls and downtown area.

The rooms and furniture are alright, and there is no problem with heat in the winter. They have some pretty neat posters and art. The halls, lobby, and kitchen are painted in bright colors of various things, but give the place a sense of being tacky... as if it was done by a group of school children.

The common room located in the basement is a gem of a find. There are plenty of couches, a TV with cable, and a working stove fireplace, which is great in the winter, and a pool table. There are also penty of movies and books. It's a great room just to chill and relax in..... however, the furniture is pretty worn out and dirty. A fellow guest was entertained by the fact he could wack the couch cushion with a stick and a cloud of dust would appear.

The place is not family run, so every few months or so the staff changes. Most of the time they have been nice though, and they did some tours down to the falls. They also have activities most nights, and on one stay a guy who worked there was kind enough to invite me to go with him to a bar about a 10 min. walk away..."The Daily Plannet"... which is a popular bar for locals and guests at this hostel, and a nice fand riendly place I might add.

This is the best place for atmosphere, being social, and meeting international people. If you're looking for a quiet rest or here in the winter, however, there is another hostel only a few hundred meters closer to town that is located in a house and is family run....and they also serve a tasty breakfast, and have better accomodations, but lack social atmosphere (you can see more of my thoughts about here under their listing)

The last time I stayed was December 2006, and they were closed this past winter for the first time, and plan on doing the same for future winters... the manager said she was going to do some renovations over the winter for this place and I'll write an update the next time I'm back (probabbly this August or September) as well as a formal review since I write reviews for Hostelz.com and have this place reserved for writing one. The last time I was there they replaced their dinosour pay kiosk internet computers with new (and faster) desktop ones and a better place to sit...you pay for a code they give you and enter that, which is much more efficent.

I'm looking forward to my next visit, which by then hopefully they will have replaced the furniture downstairs.

Quite a nice place. It's on the edge of town, but at least that means you see the real Niagara falls and not the hollywood version. A scenic walk to the falls. The rec room in the basement was quite fun!

The staff was very, very efficient and friendly and the hostel had a comfortable feel to it. We stayed on two separate evenings during a two-week period. First in a private room, which was clean and cozy enough. The second stay was in a shared dorm type room. It was a little crowded for my taste but for the price, it was convenient enough. The hostel is quite large and tastefully decorated in a bohemian sort of way, great vibrant colors! We also loved what they did with the floor in the kitchen area, cool idea! Overall, the hostel appeared clean and it was comfortable. Also, it isn't very fall from the Falls. We would definitely stay there again.

Hostel looks good on the outside with the colour. The room was also painted in a few colours. That explains the name: Rainbow Hostel. The hostel looked a bit old to us, the washrooms were not that clean. And had old material. And the distance to the centre of Niagara and the Falls was too far. About thirty-minute walk. Some of the reception people seem to didn't like what they were doing at the time we stayed at the hostel.

See all 2 cheap places to stay in Niagara Falls

See all hostels in Niagara Falls