Winkelmatten
8.9
1,391 Reviews
Winkelmatten
Cheapest Hostel in Zermatt
We compare all hostel prices in Zermatt for you. So you save money and time!

Zermatt Youth Hostel is listed at the following booking sites:

How is Zermatt Youth Hostel rated on booking websites?

A good hostel, but beware if you are not a hostelling international member it will cost you a extra six francs a night.

Worth the walk. When I stayed there in May 1992 I had a room to myself on the third floor. I remember having the lace-curtained windows open at night looking at the most beautiful night sky I have ever seen anywhere in the world to this day. Bright stars, millions more I have never seen before. The moon and the Matterhorn were magical. Down the road had raclette and wine by the fire. Excellent accommodations, clean and friendly, highly recommend. I hope to visit again!

Fantastic. Helpful, friendly and efficient staff -- the whole hostel is run with atomic precision -- well what else would you expect in Switzerland?

This hostel is also the best deal in Zermatt -- which is an expensive resort.

This is by far the best hostel I've ever stayed in. Sure, it's a bit of a walk, but it's not that bad and the view more than makes up for it. The whole place was recently refurbished, staff were ok and spoke good English, and the meals (included in the price) were excellent. Can't recommend this place highly enough.

The best thing and the worst thing about this YHA hostel is its location from the rooms there is a magnificent view of the Matterhorn, the valley and the village of Zermatt. But it is a bit of a walk to get to the hostel.

Since no cars are allowed in Zermatt, you'll most likely be coming by train. To get to the hostel, walk along the main street, turn left at the church, cross the Matter Vispa river, take the second right (past the aprs-ski bars), head up the hill and the hostel is in a large Swiss chalet on Staldenweg. It will take a minimum of 15 minutes, but if it's snowing the pathways can get very slippery, especially if carrying luggage - it's easier to take the "Winkelmatten" local bus. Also, a money saving tip for coming by train to Zermatt is to buy a return to Brig. Coming from Interlaken, buy a ticket Interlaken-Brig-Zermatt-Brig since you have to go back via Brig, it's much cheaper getting the return.

Inside, the hostel has been newly renovated and has new facilities during the season it can often be full so it's best to book early. The chalet is large so it can be over-run with school groups, but the majority of rooms hold only two bunkbeds and screen out the noise fairly well.

Staying here is expensive since only half board is offered. CHF47 for bed, breakfast and dinner is not unreasonable for Switzerland but the food choice is limited and may not be to everyone's liking. There are lots of options in the village, albeit expensive ones.

If you're skiing, the YHA is closer to the Matterhorn Express cablecar station to Klein Matterhorn and Schwarzsee, but the other two hostels in town are closer to the Gornergratbahn station and the main BVZ station out of Zermatt. 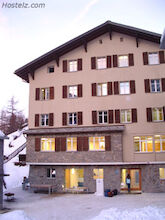 This hostel is brilliant!!! It has had a complete refurbishment very recently, and it is just gorgeous - very modern, clean, and nice. Breakfast AND dinner are included in the dormroom price, which makes it worth every cent - a meal in Zermatt would cost you a fortune otherwise (and my meal was delicious)! I cannot rate the place highly enough, this has been my favourite HI in Europe so far.

Backpackers from all over the world, as well as families, groups and young-at-heart senior citizens receive a very warm welcome in a cosy atmosphere the whole year round. Whether they choose the inexpensive variant in a dormitory or a double room with a separate shower and WC, breakfast in the dining room with a view of the Matterhorn is always included in the price.

Once you arrive in Zermatt, it’s not far to the Youth Hostel. It is located between the town centre and the station of Klein Matterhorn Railways. It is a 15-minute walk from the railway station to the Youth Hostel. A slightly more comfortable journey by electric bus or taxi is also possible. (Zermatt is car-free).

Zermatt Youth Hostel is listed on the following booking sites:

www.youthhostel.ch/zermatt
Phone Number: +41 27 967 23 20
To add or correct information for this listing, please use the Listing Correction Form.

See all 3 hostels in Zermatt

See all 3 hostels in Zermatt