9.6
1,383 Reviews
Top Location
We compare all hostel prices in Füssen for you. So you save money and time!

House L. A. - City Hostel Füssen is listed at the following booking sites:

How is House L. A. - City Hostel Füssen rated on booking websites?

We were very happy with our room. It was clean,comfortable and quite large.

The owner was very nice. I would stay there again.

Affordable and good for the price. All is maintained well. Fairly near the railway station. (15 minutes walk.) The only complaint is that It has the heating system, but early in the evening it was shut off. That was in November.

One could hardly call House L.A. a hostel -- more like a bed and breakfast with dorm rooms.

To get to the hostel from the train station you walk down Bahnhofstrasse to the TI and turn left onto Augusburgerstrasse. Then when you get to the first crosswalk you turn right onto Robert-Schmid-Strasse, walk down the street a little ways until you get to the first intersection and turn left onto Wachsbleiche and the hostel is right there on your right. When you get there you have to go around the left side of the building and there's a free phone by the door to call the owner and the number's listed on the phone. The owner will come and let you in and give you your keys within like five minutes. The hostel really isn't that far of a walk from the train station and there is parking available. Also to note, this hostel has two locations.

The rooms at the hostel are nice if basic, but they're clean. There are different sized rooms with different numbers of beds, depending on the room you book. In the room are wooden bunk beds, a table, chairs, and a trash can. A note about the bunk beds -- the mattress is supported by wooden slats that are not secured in any way, therefore when you sleep, the slats will shift and fall out (hopefully not on the person sleeping on the bunk under you) and your mattress will sag in places. You might want to get under the bed and position the slats in some way to support your weight on the mattress before you sleep on it. Linens and a very small towel are provided in the price of the room (so bring another towel).

There is generally one key per party staying in the room -- this means one key between you and your friends. There are three outlets in the room we stayed in and enough hooks on the bed to hang whatever you might need. There are no lockers in the room or anywhere on the premises that we saw. The bathrooms are one to a floor. That is one shower cubicle, toilet, and sink, all in the same room -- shared between approximately sixteen people. Although the bathrooms are scarce, they are rather large. There is a shelf above the sink to put toiletries on, but no place to hang clothing or a towel. Also, the bathrooms are quite chilly.

The only real common space in this hostel is the breakfast room, which as you may assume, is only used during breakfast. Breakfast is included in the price of the room and includes a hot drink (coffee, tea, hot chocolate), a glass of juice, rolls, an egg, and some cheese and what appear to be sausage slices. There is also a small balcony on the uppermost floor which has a nice view of some on the nearby mountains. Other than that there is a computer in the hallway outside of the breakfast room which you can use provided it's powered on. The atmosphere in this hostel, besides being somewhat spooky, is dull. People don't really spend much time in the hostel itself and when they do, they don't socialize much besides a quick hello.

House L.A. - City Hostel is quiet, maybe even spooky. You wouldn't want to stay here if you're traveling alone. This hostel is spooky mostly because it's empty until rather late at night, people don't check in until well into the evening hours, no one is there manning a reception desk, and it's quiet. This is besides being located not far from the center of town, but still in a rather residential neighborhood that makes it seem somewhat isolated.

A note about the man who runs the hostel/lets you into your room the first time. We're not sure if this happens regularly, but he had to send some people who arrived by car to the other branch of the hostel because this one was overbooked/had a large group coming to stay. When he showed us to our room, he then proceeded to play musical chairs with the people he placed in the room after us and then sent their things to another room while they were out at dinner and left us to notify them that they had been moved and new people were put in their place. He also came around rather late at night (after 10 p.m. but before midnight) and knocked on doors to get the occupants to open up so he could see if there were empty beds in the room where he could place people who were just arriving. We arrived at 9 p.m. maybe, and were amongst the first ones there. He keeps no track of what room he places someone in and therefore has no idea what rooms still have empty beds for new arrivals. 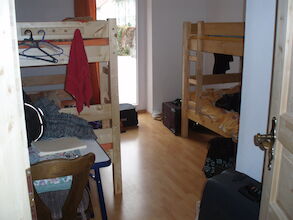 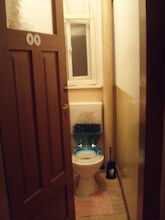 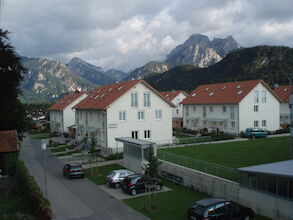 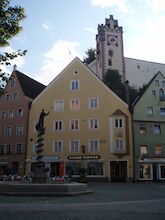 We really enjoyed our stay in the House L.A. in Fssen. The owners are really nice and helpful! great big breakfast, clean rooms and bathrooms, nice house. there isn't a room for all guests just for staying time together and get to know the others.

This is more like a B&B than like a hostel. The hostel is around twenty minutes on foot from the centre but the owner is extremely kind and helpful and can come to pick you up (and bring you back) at the station for free if advised in advance. However with bus n70 you arrive directly in front of the house, ask the driver where to get off. Room and bathroom were spacious and clean. Nevertheless you can hear noise form the room closed to yours. Breakfast (included in the price) is brought into your room at the hour you choose the day before. Very reasonably priced too.

I stayed here for two nights in May of 2006. The rumours are true, this is an absolutely amazing "hostel," which is really a bed and breakfast if you ask me. It's basically a house with a bunch of the rooms converted to have sinks in them and lockable doors. The owner is a great guy who bends over backwards to make people feel comfortable, and get you to the train station when you need to be there. In fact, the morning I left I had resigned myself to catching a later train, but he rushed to get me there on time and I managed to catch the earlier one I thought I had missed. I had read that his English was sketchy before I went, but it's certainly quite decent by now. The breakfast in bed each morning is the kind of thing that, for the price, is just too good and you can't believe is actually going to show up until you wake up and it arrives. Our two-bed room was spacious and had an incredible view of the mountain peaks beyond the owners well kept backyard. Everything is exceptionally clean. Yes, this place is about a half an hour walk from the train station, but I'd have to nominate this place for one of the best "hostels" in all of Europe, so you'd be silly not to stay here. Besides, it's a beautiful walk, and you'll get a ride back to the station when you leave. I absolutely loved Fssen and the combination of that beautiful town and this great place to stay for so cheap should not be missed. If you do stay here, there is a butcher's shop a few blocks back towards the train station, and just off to the right by the little fountain, that had the best bratwurst on a bun I found in all of Bavaria.

this hostel is really really awesome. although it is a far walk from the station, the place is immaculate. very clean, small and friendly. the owner is very helpful, really nice and he brought us breakfast every morning right to our room. he even drove me to the train station because it was pouring rain. i definitely recommend this place.

This hostel is superb! I stayed there on the night of 12 April 2006. Next morning, the breakfast was incredible. I honestly did not expect that much coming straight to my room. Then, on 13 April 2006 I decided to stay there for another night, which there actually was no room available for us. After nine p.m., when it was late enough to assume that the guest who had booked the basement room wouldn't come, they arranged us a room for us. Althought eventually late at freezing night, they showed up, the host still managed to rearrange everything fine. The most impressive thing was on 14 April morning when we left. We had to catch the morning train, so we just left without our breakfast. But you know what? When we were on the train and the train was about to go. The host ran to us at the platform just to give us a big bag of breakfast! He also told as that he intended to give us a lift, but we were just too hurried to ignore that. I would highly recommend this hostel. I'll definitely stay there again if I go back to Fuessen.

"House L.A" is an ideal place to stay in Füssen, for travellers or families on a budget who wish to explore the region or who are looking for a weekend getaway.

The hostel enjoys an excellent location in City-Centre of Füssen 3 Min from the main station lying near Neuschwanstein castle.

The hostel can cater for both small and large groups.

your friendly hostel in fussen

House L. A. - City Hostel Füssen is listed on the following booking sites:

See all hostels in Füssen

See all 6 cheap places to stay in Füssen