7.2
3 Reviews
We compare all hostel prices in North Conway for you. So you save money and time!

Cranmore Mountain Lodge is off the beaten path, so the traffic noise is minimal. Breakfast is included -- the menu is quite varied and very good. There is a path in the back leading to hiking trails that are easily followed. They really embrace the green scene too, with recycling programs, chemical-free cleaners, and many reminders to travel lightly.

Despite being slightly off the beaten path (read, not on the main North Conway drag), it's close enough to get to town within minutes. The location can't be beat -- it's about a mile from the North Conway strip but in a superbly quiet location near hiking trail-heads. North Conway's main shopping area is just a few minutes drive from the inn. Free passes for Great Glen Trails are also provided by the lodge.

We love sleeping with the windows open and hearing the rushing brook outside -- the rooms are clean and the beds are comfortable. The door locks are secure, the bathrooms and rooms are well lit, and it feels like the shower is a waterfall flowing from the Gods! They even have some pet-friendly rooms. Babe Ruth used to own and vacation here, and they've done a great job of memorializing him. You can sleep where the Babe used to sleep, surrounded by historic photos.

It has a beautiful dining room and the breakfast is incredible! There's a separate kids menu with twelve items to choose from. The adult menu is equally grand and the food is filling and scrumptious. We are impressed that there's a completely gluten-free breakfast offered too. One of the views from the dining room is the nice little pond in the backyard -- we have seen ducks swimming and a heron fishing. The kids enjoy the activities outside on the grounds as well as the game room inside -- they're making several new friends on the first day of our stay. The hostel has a great pool and deck and a hot tub (which is awesome).

We have stayed at big luxury inns and at small housekeeping cabins in the White Mountains. We think that this place is the perfect spot. The rooms are historic, yet very clean and beautiful. The breakfasts are gourmet, with immediate coffee. There's a pond out back with happy, croaking frogs, and on the edge of the property flows a crystal mountain stream over ancient rocks with a path to walk along. All this, and you are also close to area attractions. The hosts are always available, yet never intrusive. We wouldn't stay anywhere else, after decades of visiting the White Mountains of New Hampshire. 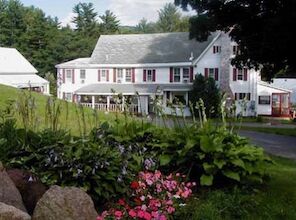 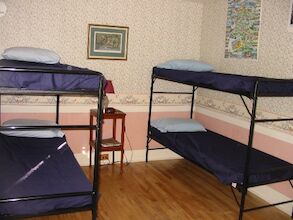 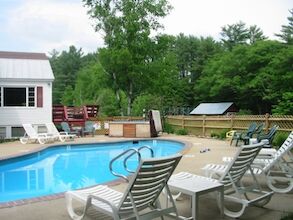 I adore this place. Pricey for a budget traveler to do an extended winter stay but well worth it for a night or two during a week long winter tip when the bivy gets old. The amenities are priceless, the rooms are no more spartan than any climber or outdoorsman shouldn't be able to stand, the food is appropriate, and the owners have been absolutely gracious.

From the outside, the Cranmore Mountain Lodge looks less like a guesthouse and more like the family farm that it probably was at some point. Less than five minutes from tourist-driven North Conway, with its green meadow, barn, and frog pond you can almost forget that you're anywhere near a Wal-Mart and bumper to bumper traffic.

In theory, the Lodge is a backpacker's dream come true. The main lodge has the average prices for a regular B&B in the area while the bunkhouse -- the "hostel" part -- is about a quarter of the price of the B&B. The good news is that even the bunkhouse patrons have access to the same amenities as the Lodge patrons do. You can access the outdoor swimming pool, the hot tub, and still have a free breakfast with the other guests in the main building's cozy eating area. The catch is, of course, that while those amenities are good you're still ultimately staying in a hostel -- one that probably hasn't been updated in about ten years.

The bad news -- starting with the bedrooms. There are three dorm rooms with about ten beds per room. The beds are the basic metal structures with paper-thin mattresses and the obligatory hard hostel pillow. For once, it is actually encouraged that you bring your own sleeping bag, or else you can rent bedding from the hostel. However, there were blankets on all of the beds in view. Sheets were nowhere to be found, but if you really wanted, the blankets were there to be used (at your own risk, as it appeared that the hostel part wasn't cleaned on a regular basis). A good thing was that it seemed like each bed had access to an electrical outlet, which made it easier to recharge your cell phone, for instance.

The common area is of fairly good size, but really outdated and could use a good scrubbing. The furniture is old and a fine layer of dust seems to cover everything. If money were going to be spent updating anything, however, it should go into the bathrooms first. For starters, despite the fact that there is room for about thirty guests, there are only two bathrooms. The nozzles on the shower are incredibly tiny and don't give off much of a spray. It seems like it would be difficult to get really good and clean after a long day of trekking around Mt. Washington -- or even trekking around the Outlet Mall.

The good news -- starting with the bedrooms. Because the bunkhouse sets partly underground like a basement it is incredibly quiet. There are lodge rooms above the hostel so quiet hour starts a little earlier than in most hostels, but it seems to be a natural absorber of noise anyway. At night you can't even hear the traffic up on the main road. That makes for a really good night's sleep. In the common room there is a color TV with a VCR. The TV has cable and gets an abundance of channels. After a long day of hiking, it's kind of nice to kick back and unwind that way. There's also a fireplace in the common room that looks like it has been in use recently.

At this hostel, you are pretty much getting what you are paying for. You're certainly not going to find anything cheaper, unless you camp out, and if you don't mind something on the rougher side it's not bad. In its own outdated way it is rather charming and you do have access to the pool and hot tub. The management pretty much leaves you alone and after a general explanation as to where the room was we never saw them again. (There are no keys as the door doesn't lock.)

A word of warning, however. At night when you're coming back in, if you start hearing really strange noises and tiny splashes, it's just the frogs jumping into the pond. There must be hundreds. It wouldn't hurt to watch where you step, either. They were all lined up outside, waiting to get in the hostel door. Now, you don't get that at most hostels. 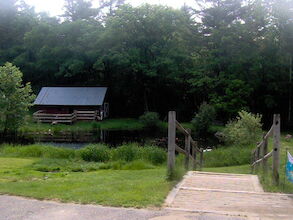 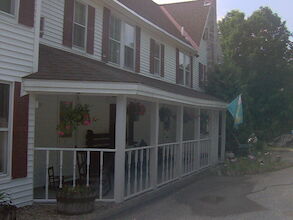 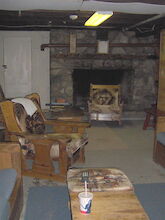 The Cranmore Mountain Lodge bunkhouse is a climber's dorm and it's perfect for all of us climbers that would rather spend their money on gear. The breakfast you get for the money ($25 per night for the bed, use of the heated pool and hot tub) is a great deal! Also, Kevin and Jeanie, the owners are wonderful people. I recommend the Cranmore Mountain Lodge bunkhouse to all outdoor enthusiasts. Stay in the Inn if you don't like the conditions in the bunkhouse.

Tacky. It needs a lot of updating. The facilities are poor. The pictures on the Web don't reflect the actual conditions. The breakfast was not like a Bed and Breakfast's. The owners are not the most gracious people in the world.

The warm hospitality of your hosts, Frederique & Thierry Procyk, and the charm of this historic bed & breakfast inn allow you to feel right at home while visiting the North Conway area. Guests are treated each morning to a full country breakfast before starting a wonderful day in the New Hampshire mountains.

At Cranmore Mt. Lodge, guests enjoy the charm and personality of an old country inn while also having a full set of resort ameneties including: